If I have a generic interface with a covariant type parameter, like this:

And If I define this class hierarchy:

Then I can implement the interface twice on a single class, like this, using explicit interface implementation:

However, casting the x to IGeneric<Base>, gives the following result:

I expected the compiler to issue an error, as the call is ambiguous between the two implementations, but it returned the first declared interface.

Why is this allowed?

(inspired by A class implementing two different IObservables?. I tried to show to a colleague that this will fail, but somehow, it didn't)

The compiler can't throw an error on the line

because there is no ambiguity that the compiler can know about. GetName() is in fact a valid method on interface IGeneric<Base>. The compiler doesn't track the runtime time of b to know that there is a type in there which could cause an ambiguity. So it's left up to the runtime to decide what to do. The runtime could throw an exception, but the designers of the CLR apparently decided against that (which I personally think was a good decision).

To put it another way, let's say that instead you simply had written the method:

and you provide no classes implementing IGeneric<T> in your assembly. You distribute this and many others implement this interface only once and are able to call your method just fine. However, someone eventually consumes your assembly and creates the DoubleDown class and passes it into your method. At what point should the compiler throw an error? Surely the already compiled and distributed assembly containing the call to GetName() can't produce a compiler error. You could say that the assignment from DoubleDown to IGeneric<Base> produces the ambiguity. but once again we could add another level of indirection into the original assembly:

Once again, many consumers could call either CallIt or CallItOnDerived1 and be just fine. But our consumer passing DoubleDown also is making a perfectly legal call that could not cause a compiler error when they call CallItOnDerived1 as converting from DoubleDown to IGeneric<Derived1> should certainly be OK. Thus, there is no point at which the compiler can throw an error other than possibly on the definition of DoubleDown, but this would eliminate the possibility of doing something potentially useful with no workaround.

I have actually answered this question more in depth elsewhere, and also provided a potential solution if the language could be changed:

Given that the chance of the language changing to support this is virtually zero, I think that the current behavior is alright, except that it should be laid out in the specifications so that all implementations of the CLR would be expected to behave the same way.

If you have tested both of:

You must have realized that the results in reality, changes with the order you declaring the interfaces to implement. But I'd say it is just unspecified.

Here we have two questions to consider:

Thus your call meets the unspecified condition. But how could this happen? 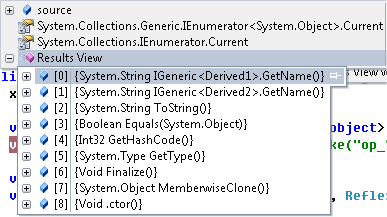 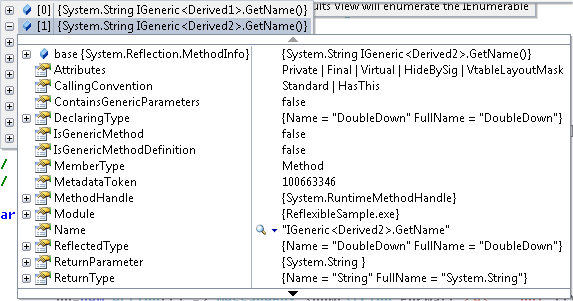 As the images shown, these two generic derived interfaces have neither the same name nor another signatures/tokens make them identical.

Holy goodness, lots of really good answers here to what is quite a tricky question. Summing up:

I'd only add one other thing, and that is: the bad news is that interface reimplementation semantics do not exactly match the behaviour specified in the CLI specification in scenarios where these sorts of ambiguities arise. The good news is that the actual behaviour of the CLR when re-implementing an interface with this kind of ambiguity is generally the behaviour that you'd want. Discovering this fact led to a spirited debate between me, Anders and some of the CLI spec maintainers and the end result was no change to either the spec or the implementation. Since most C# users do not even know what interface reimplementation is to begin with, we hope that this will not adversely affect users. (No customer has ever brought it to my attention.)

The question asked, "Why doesn't this produce a compiler warning?". In VB, it does(I implemented it).

The type system doesn't carry enough information to provide a warning at time of invocation about variance ambiguity. So the warning has to be emitted earlier ...

Also, to be frank, it was impossible to come up with a warning message useful enough that people would understand it. Incidentally,

Trying to delve into the "C# language specifications", it looks that the behaviour is not specified (if I did not get lost in my way).

o The function member implementation to invoke is determined:

• Otherwise, if S contains a declaration of a non-static public member that matches M, then this member is the implementation of I.M. If more than one member matches, it is unspecified which member is the implementation of I.M. This situation can only occur if S is a constructed type where the two members as declared in the generic type have different signatures, but the type arguments make their signatures identical.

Not the answer you're looking for? Browse other questions tagged c# generics types interface covariance or ask your own question.

43
No warning or error (or runtime failure) when contravariance leads to ambiguity
24
Why is a property get considered ambiguous, when the other interface is set-only?
4
How do I add multiple objects to a single array?
4
What magic is this?
2
A class implementing two different IObservables?