Has anyone seen a topoJSON file for U.S. congressional districts? Alternatively, if I can locate the coordinates or a geoJSON file, is it easy to convert to arcs?

Official cartographic boundaries are more likely to be found as shapefiles rather than GeoJSON or TopoJSON, although in this case you can find both in the jsongeo/cd113 repository on GitHub (cd113.topojson).

To get the data directly from the U.S. Census Bureau, a little Google searching will lead you to TIGER/Line shapefiles for the 113th Congress. (Congressional districts change slightly from congress to congress, so be careful that you use the appropriate version!) Clicking through to the “FTP Site Sorted by Layer” you’ll find the cryptically-named CD113 folder, and at the very bottom, tl_rd13_us_cd113.zip, a 38M zipped shapefile that contains the congressional districts for the entire United States. This file is far to large for you to use directly, but you can follow the Let’s Make a Map tutorial to use ogr2ogr and topojson to convert the shapefile to a more manageable representation.

Specifically, you’d start by converting the Shapefile to GeoJSON (101MB!):

Then convert the GeoJSON to TopoJSON and simplify (only 472KB):

Now the first two digits of the geometry id (d.id / 1000 | 0) are the state FIPS code (see us-state-names.tsv) and the last two digits are the congressional district number (d.id % 1000) within that state. The simplification (-s) is optional, but it’s generally a good idea if you’re displaying a static map in a browser; I tuned the threshold to retain about half the points, but you could make the file even smaller by using a larger threshold.

And there you have it: 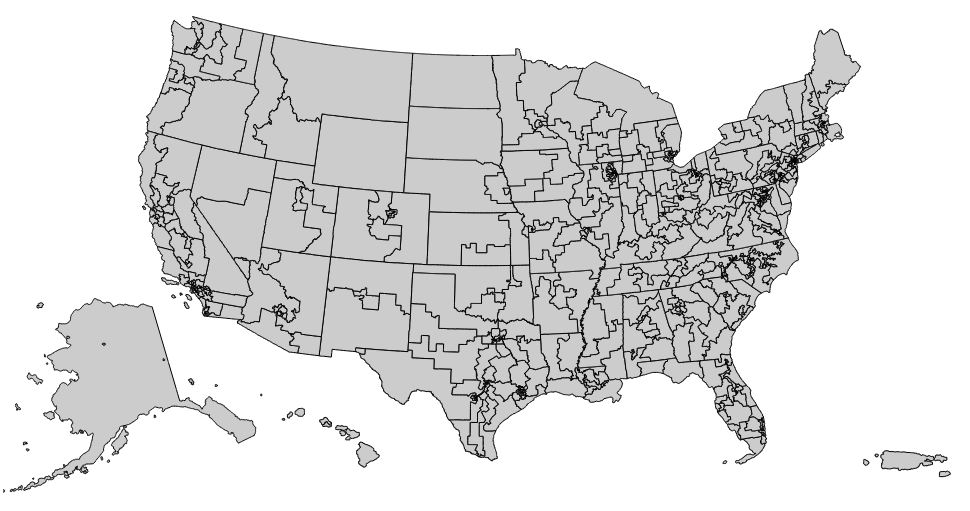 You’ll probably want to combine the TopoJSON file with the land and states features from us.json, since in most maps you’ll want to clip the congressional districts to the land boundary, and draw some additional boundary between states. That can be done by combining TopoJSON files using multiple input arguments to the topojson binary.

Another great resource for this is the united states github repo:

The repository has both kml and geojson files for each congressional district, in separate folders by date.

This Census Bureau link will introduce and direct you to shapefiles for the data you're looking for:

shapefiles can be converted to geojson and topojson files. here's a basic tutorial that will introduce you to many of considerations:

I made this dataset and adaptated projection for d3 v4, maybe it suits your needs:

Not the answer you're looking for? Browse other questions tagged geojson or ask your own question.

0
GeoJson to TopoJson converter with Attributes
1
GeoJSON --> TopoJSON conversion for Point geometries?
0
Convert multiple GeoJSON files to one Topojson while keeping respective properties
1
Why is this TopoJSON rendered so small with D3? (Simple example)
1
Building a uniform topojson with two quantized/transformed topojsons?
0
Merge TopoJSON and only keep new objects