What causes and what are the differences between NoClassDefFoundError and ClassNotFoundException?

What is the difference between NoClassDefFoundError and ClassNotFoundException?

What causes them to be thrown? How can they be resolved?

I often encounter these throwables when modifying existing code to include new jar files. I have hit them on both the client side and the server side for a java app distributed through webstart.

Possible reasons I have come across:

When I encounter these today I take a trail-and-error approach to get things working. I need more clarity and understanding.

The difference from the Java API Specifications is as follows.

Thrown when an application tries to load in a class through its string name using:

but no definition for the class with the specified name could be found.

Thrown if the Java Virtual Machine or a ClassLoader instance tries to load in the definition of a class (as part of a normal method call or as part of creating a new instance using the new expression) and no definition of the class could be found.

The searched-for class definition existed when the currently executing class was compiled, but the definition can no longer be found.

As for ClassNotFoundException, it appears that it may stem from trying to make reflective calls to classes at runtime, but the classes the program is trying to call is does not exist.

The difference between the two is that one is an Error and the other is an Exception. With NoClassDefFoundError is an Error and it arises from the Java Virtual Machine having problems finding a class it expected to find. A program that was expected to work at compile-time can't run because of class files not being found, or is not the same as was produced or encountered at compile-time. This is a pretty critical error, as the program cannot be initiated by the JVM.

On the other hand, the ClassNotFoundException is an Exception, so it is somewhat expected, and is something that is recoverable. Using reflection is can be error-prone (as there is some expectations that things may not go as expected. There is no compile-time check to see that all the required classes exist, so any problems with finding the desired classes will appear at runtime.

A ClassNotFoundException is thrown when the reported class is not found by the ClassLoader. This typically means that the class is missing from the CLASSPATH. It could also mean that the class in question is trying to be loaded from another class which was loaded in a parent classloader and hence the class from the child classloader is not visible. This is sometimes the case when working in more complex environments like an App Server (WebSphere is infamous for such classloader issues).

On examining the code, say you find a line of code like below, make sure that the class SomeClass in in your CLASSPATH.

Tip : To find out which jar a class belongs to, you can use the web site jarFinder . This allows you to specify a class name using wildcards and it searches for the class in its database of jars. jarhoo allows you to do the same thing but its no longer free to use.

If you would like to locate the which jar a class belongs to in a local path, you can use a utility like jarscan ( http://www.inetfeedback.com/jarscan/ ). You just specify the class you'd like to locate and the root directory path where you'd like it to start searching for the class in jars and zip files.

NoClassDefFoundError is a linkage error basically. It occurs when you try and instantiate an object (statically with "new") and it's not found when it was during compilation.

ClassNotFoundException is more general and is a runtime exception when you try to use a class that doesn't exist. For example, you have a parameter in a function accepts an interface and someone passes in a class that implements that interface but you don't have access to the class. It also covers case of dynamic class loading, such as using loadClass() or Class.forName().

A NoClassDefFoundError (NCDFE) happens when your code runs "new Y()" and it can't find the Y class.

It may simply be that Y is missing from your class loader like the other comments suggest, but it could be that the Y class isn't signed or has an invalid signature, or that Y is loaded by a different classloader not visible to your code, or even that Y depends on Z which couldn't be loaded for any of the above reasons.

If this happens, then the JVM will remember the result of loading X (NCDFE) and it will simply throw a new NCDFE every time you ask for Y without telling you why:

save this as a.java somewhere

The code simply tries to instantiate a new "b" class twice, other than that, it doesn't have any bugs, and it doesn't do anything.

Compile the code with javac a.java, Then run a by invoking java -cp . a -- it should just print out two lines of text, and it should run fine without errors.

Then delete the "a$b.class" file (or fill it with garbage, or copy a.class over it) to simulate the missing or corrupted class. Here's what happens:

The first invocation results in a ClassNotFoundException (thrown by the class loader when it can't find the class), which must be wrapped in an unchecked NoClassDefFoundError, since the code in question (new b()) should just work.

The second attempt will of course fail too, but as you can see the wrapped exception is no more, because the ClassLoader seems to remember failed class loaders. You see only the NCDFE with absolutely no clue as to what really happened.

So if you ever see a NCDFE with no root cause, you need to see if you can track back to the very first time the class was loaded to find the cause of the error.

ClassNotFoundException : occurs when class loader could not find the required class in class path. So, basically you should check your class path and add the class in the classpath.

NoClassDefFoundError : this is more difficult to debug and find the reason. This is thrown when at compile time the required classes are present, but at run time the classes are changed or removed or class's static initializes threw exceptions. It means the class which is getting loaded is present in classpath, but one of the classes which are required by this class are either removed or failed to load by compiler. So you should see the classes which are dependent on this class.

Now after compiling both the classes, if you delete Test1.class file and run Test class, it will throw

ClassNotFoundException: thrown when an application tries to load in a class through its name, but no definition for the class with the specified name could be found.

NoClassDefFoundError: thrown if the Java Virtual Machine tries to load in the definition of a class and no definition of the class could be found.

What is the reason for getting each of them and any thought process on how to deal with such errors?

If you've got a C background, a CNFE is like a failure to dlopen()/dlsym() and an NCDFE is a problem with the linker; in the second case, the class files concerned should never have been actually compiled in the configuration you're trying to use them.

If com/example/Class1 doesn't exist in any of the classpaths, then It throws ClassNotFoundException.

If com/example/Class2 existed while compiling B, but not found while execution, then It throws NoClassDefFoundError.

Both are run time exceptions.

ClassNotFoundException is thrown when there is attempt to load the class by referencing it via a String. For example the parameter to in Class.forName() is a String, and this raises the potential of invalid binary names being passed to the classloader.

On the other hand, NoClassDefFoundError is thrown

In short, a NoClassDefFoundError is usually thrown on new() statements or method invocations that load a previously absent class (as opposed to the string-based loading of classes for ClassNotFoundException), when the classloader is unable to find or load the class definition(s).

Difference Between ClassNotFoundException Vs NoClassDefFoundError 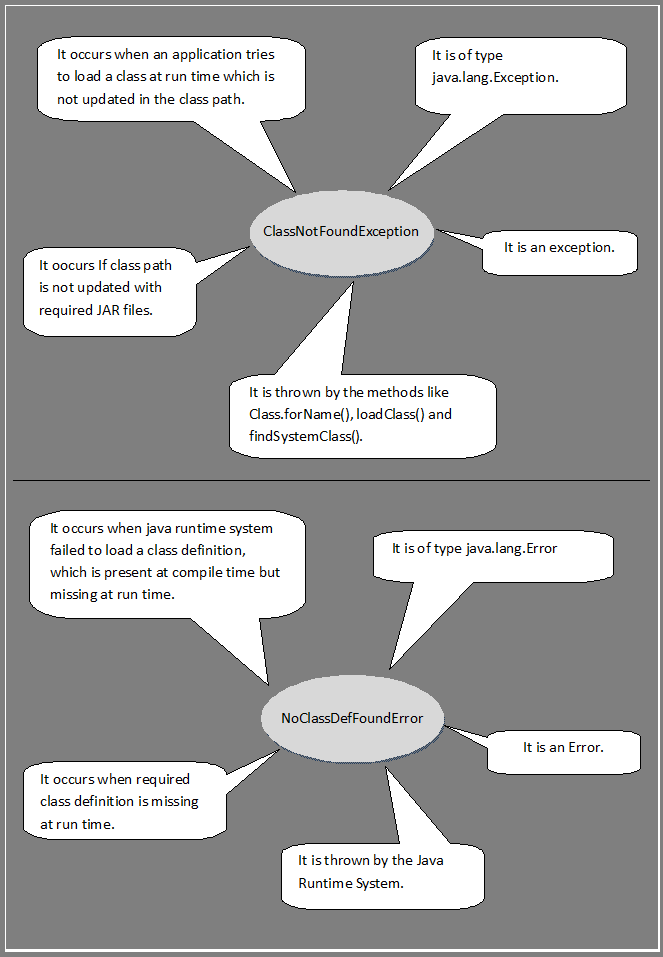 With the names itself we can easily identify one from Exception and other one is from Error.

Exception: Exceptions occurs during the execution of program. A programmer can handle these exception by try catch block. We have two types of exceptions. Checked exception which throws at compile time. Runtime Exceptions which are thrown at run time, these exception usually happen because of bad programming.

Error: These are not exceptions at all, it is beyond the scope of programmer. These errors are usually thrown by JVM. 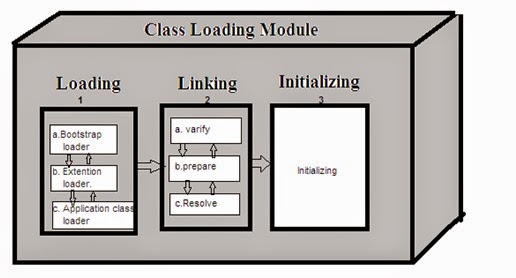 Given the Class loader sussystem actions:

This is an article that helped me a lot to understand the difference: http://docs.oracle.com/javase/specs/jvms/se7/html/jvms-5.html

If an error occurs during class loading, then an instance of a subclass of LinkageError must be thrown at a point in the program that (directly or indirectly) uses the class or interface being loaded.

Add one possible reason in practise:

In practise, Error may be thrown silently, e.g, you submit a timer task and in the timer task it throws Error, while in most cases, your program only catches Exception. Then the Timer main loop is ended without any information. A similar Error to NoClassDefFoundError is ExceptionInInitializerError, when your static initializer or the initializer for a static variable throws an exception.

ClassNotFoundException is a checked exception that occurs when we tell JVM to load a class by its string name using Class.forName() or ClassLoader.findSystemClass() or ClassLoader.loadClass() methods and mentioned class is not found in the classpath.

Most of the time, this exception occurs when you try to run an application without updating the classpath with required JAR files. For Example, You may have seen this exception when doing the JDBC code to connect to your database i.e.MySQL but your classpath does not have JAR for it.

NoClassDefFoundError error occurs when JVM tries to load a particular class that is the part of your code execution (as part of a normal method call or as part of creating an instance using the new keyword) and that class is not present in your classpath but was present at compile time because in order to execute your program you need to compile it and if you are trying use a class which is not present compiler will raise compilation error.

Below is the brief description

You can read Everything About ClassNotFoundException Vs NoClassDefFoundError for more details.

ClassNotFoundException and NoClassDefFoundError occur when a particular class is not found at runtime.However, they occur at different scenarios.

ClassNotFoundException is an exception that occurs when you try to load a class at run time using Class.forName() or loadClass() methods and mentioned classes are not found in the classpath.

NoClassDefFoundError is an error that occurs when a particular class is present at compile time, but was missing at run time.

When you compile the above program, two .class files will be generated. One is A.class and another one is B.class. If you remove the A.class file and run the B.class file, Java Runtime System will throw NoClassDefFoundError like below:

Not the answer you're looking for? Browse other questions tagged java classpath noclassdeffounderror classnotfoundexception or ask your own question.