Getting a LAMP stack running on a Vagrant VM (under Windows 7 host), full instructions?

I have a Vagrant VM standard issue lucid32.box running. What would the complete instructions be to set up LAMP on this?

I have looked at knife (part of chef) and attempted:

How do I set up a knife configuration file and what should I have in it?

I've been doing a lot of searching online for answers but am overwhelmed by partial solutions that don't explain their starting point/pre-requisites.

I will aim to answer this myself as no-one else seems to want to. Here is my current understanding - I aim to address my unknowns/questions in red later. 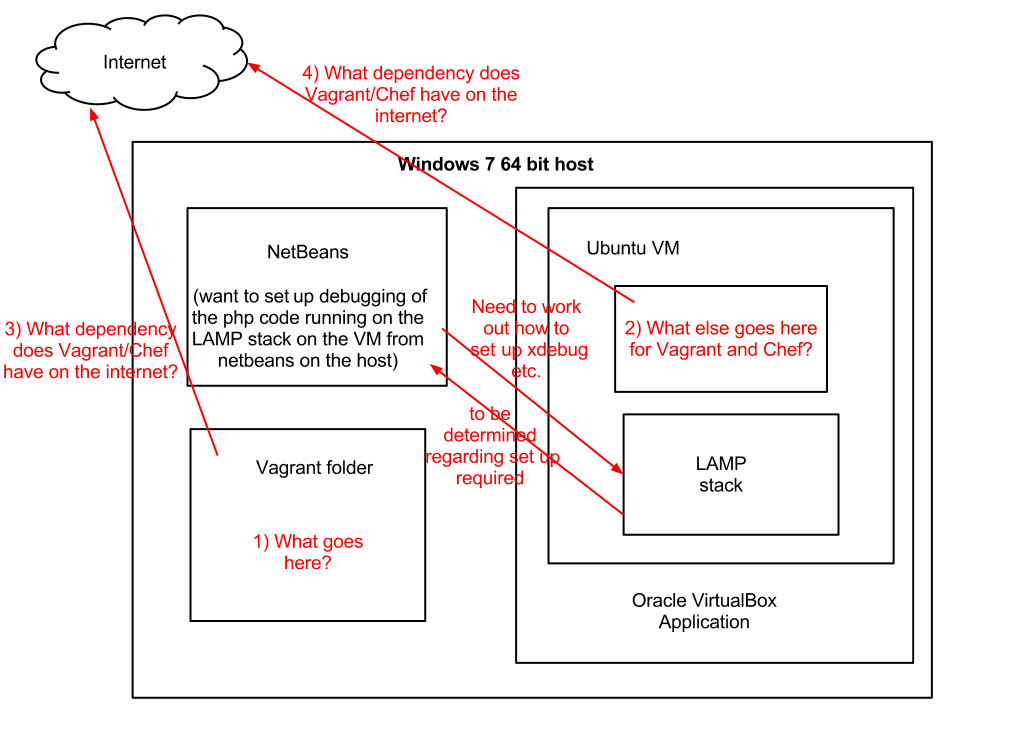 OK, I've decided to answer this fully for myself as the original question poster. (Thanks to everyone who contributed prior.)

I asked this question originally because although there are plenty of instructions and guides on the web, what they don’t seem to do is:

Here is a picture to clarify which API is on which version of the Vagrant software: 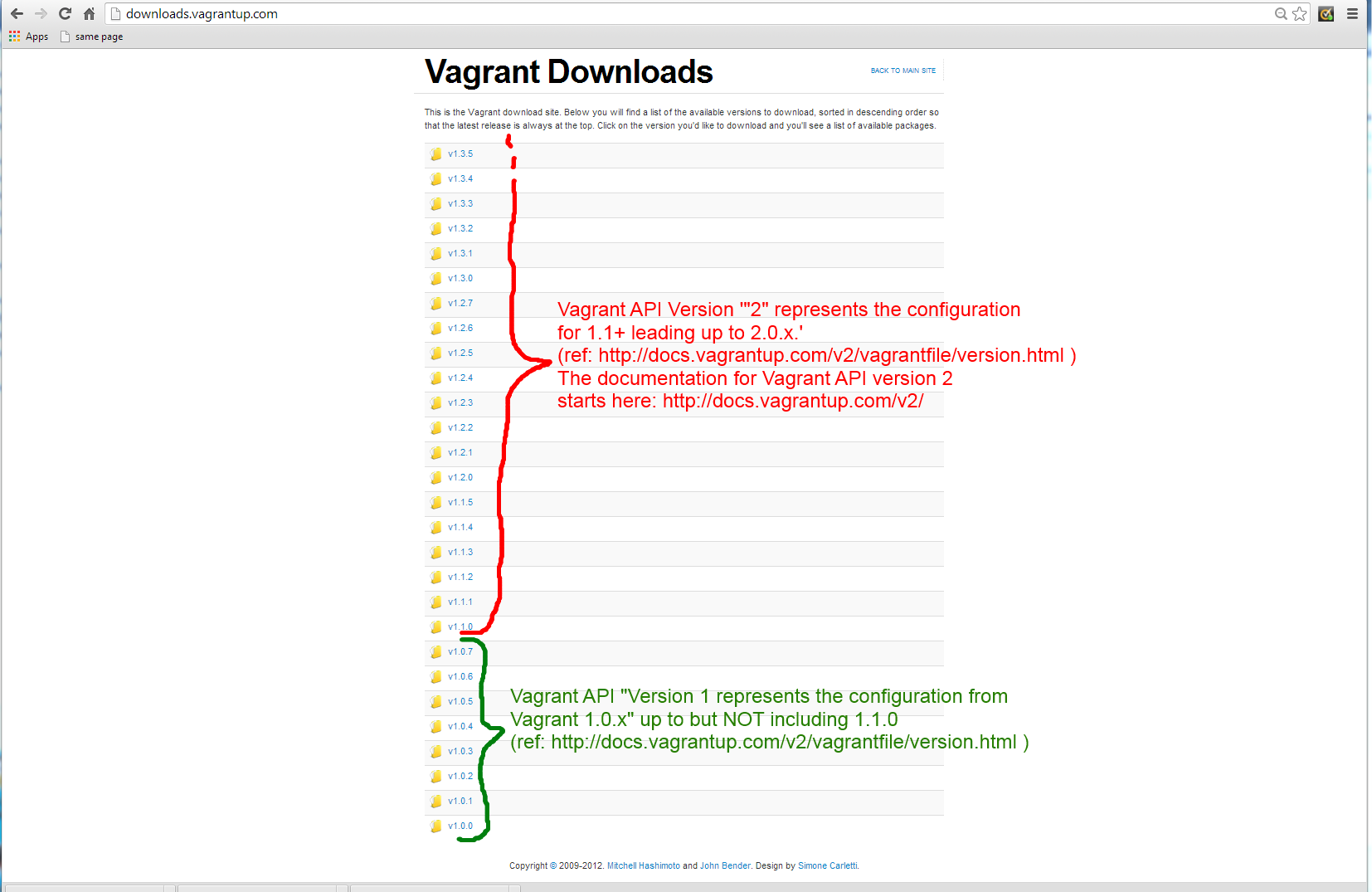 For my example setup of using Vagrant here, I would suggest using pre-V1.1.0 (i.e. Vagrant API 1 from the downloads on vagrantup.com) however you ought to be able to use Vagrant 2 API version of the Vagrant software as mentioned above but you'll need to add a 'directive' at the beginning of your scripts to tell Vagrant that they are for Vagrant 1 otherwise the scripts will fail with an error message. TODO: I'll try to get that directive and put it here to help.

(Mitchell Hashimoto, Vagrant creator - please take note of the above for any future editions of your O'Reilly book: Vagrant: Up and Running: http://shop.oreilly.com/product/0636920026358.do)

What these instructions in this answer should do:

Get you a 32-bit Ubuntu Linux OS with a LAMP (Linux OS, Apache web server, MySQL database, PHP) stack running as a Virtual Machine using Oracle VirtualBox on your Windows 7 64-bit machine (or a Mac or Linux machine, but primarily tested on Windows but should work fine on Mac and this solution is meant to be platform-independent). I have tested PHP OK (via standard phpinfo.php file and see that MySQL is running but haven't tested this yet).

Note: An alternative pretty much out-of-the-box solution for those (like me) who want a LAMP stack with the Drupal open-source content management framework is here: http://drupal.org/project/vagrant You should be able to follow just my prerequisites below and then download the .zip from the above URL and follow the instructions on there and run vagrant up from the command line to start the VM and wait as it builds and starts (some of this is one-off the first time as once you have the image set up subsequent boots should be faster). You get a lot of other developer stuff 'for free' (i.e. to save you the effort installing them) - like git, drush (I think), and performance profiling tools. Afterwards go to [server address]/install.php to install Drupal. This seems to work well without issue - I've tried it out but not tested it extensively. You might need to disable the install of xhprof if you get an error message - see http://drupal.org/node/1940668 for details.

Another option is to use this configuration tool: https://puphpet.com/ - It's a visual point-and-click method for configuring your Vagrant setup. This works on Vagrant 2 (I think, Update yes, it does, on Vagrant 1.2.2 at least). Update: In fact, I've got this working successfully and based a setup for running Drupal on it locally - see my guide here: https://drupal.org/node/2055947

Here are some other out-of-the-box Vagrant setups that I've found to work well - on Mac and Windows:

If you want the Solr search engine locally in your VM as part of your LAMP stack, you may want to look at:

Even though these alternatives are great, my instructions are still of value to help you understand the workings of such setups or if you want a simpler more basic LAMP stack.

Logging into the machine once set up - this is done via the standard SSH-based login. You will need the free tools putty.exe and puttygen.exe. At the moment I have not provided how to log in with SSH here but will try to do so in future. You will find references at the end of this answer.

Note that the login will be with the user vagrant.

(After you have followed the setup instructions below) to use the root user you need to 'unlock' the account to be able to reset the password:

Test the new password by logging into root with it:

Credit: https://scottlinux.com/2011/07/22/reset-or-change-user-password-in-linux/ (Article: "Reset or Change User Password in Linux" - This helped me work out how to do it.)

Give it a try - add comments to the answer if you have problems and I will try to fix. See also the troubleshooting at the end.

Currently using Puppet. Do it with Chef instead of Puppet, just to widen the ways of working. Both of these are contenders but have different approaches so I believe: With Puppet I am told that you say what you want and Puppet may make some arbitrary decisions to get you there. Whereas with Chef I believe you define the precise sequence of steps. Again - comment here and correct me if necessary,

Prerequisites for these instructions:

(Credit: These instructions are based on: http://ox86.tumblr.com/post/23734821654/painless-development-environments-with-virtualbox ...but not an exact copy as they did not work for me.)

(Ensure you have the prerequisites above.)

The host setup work is done on your host machine in your Windows user folder, for example for me this is C:\Users\rdavis

Download the distro install image, in this case Ubuntu Lucid (10.04). This image is effectively equivalent to the install disk (CD or DVD) that you would traditionally use to install an OS on a machine.

(By the way, there are several other popular distros on vagrantup.com, but if you want to generate the .box file from a distro .ISO then there is a tool called VeeWee to do that: https://github.com/jedi4ever/veewee)

(Note, I just used vagrant init when writing up these instructions because I had already initialised lucid32, but for the first time, you will have to do the above command.)

Edit C:\Users\rdavis\lamp-project\Vagrantfile - insert the following directly after Vagrant::Config.run do |config|

Then, in C:\Users\rdavis\lamp-project\manifests create file default.pp and put in it:

(Helpful note (optional), my above versions of Vagrantfile and default.pp (and other Vagrant ancilliary files and folder structure) are available from my GitHub repository, VagrantVMSetups, at: https://github.com/therobyouknow/VagrantVMSetups - See the justlamp folder - this is the same as the contents of lamp-project used in this answer.)

Note that this can take a while (5-15 minutes) - but bear with it. It should now successfully run a LAMP VM. Then you have finished with the VM in your current work task. If you then keep the VM for use at a later time but shut it down using vagrant halt (rather than vagrant destroy to delete the VM image) then I would expect this delay to be a one-off initial setup time. Subsequent startups of the VM (using vagrant up) should be faster I would think.

Background: this happened to me because I pasted in the code snippets from the web page where the instructions came from. The code snippet had open-and-close quotes - which aren’t interpreted as proper quotes by the interpreter/parser that Vagrant uses (or indeed by most script interpreters and compilers I would think.)

Remedy: you shouldn’t see this - the original script used contained references to a path containing 000-default. I just removed all lines and constructs referring to it.

Troubleshooting Problem 3: PHP files are treated as downloads (download of file occurs in browser) rather than being executed and displayed.

Remedy: you may or may not need to do this.

This tip worked: (to enable PHP and stop the file being seen as a download): https://serverfault.com/questions/243435/getting-php-to-work-with-apache-to-run-php-files-through-browser

is: edit php.ini These are shared extensions (.so files). You need to enable them in php.ini and then restart PHP.

Myself, I didn’t need to edit php.ini after all. By the way, this is at: /etc/php5/cli/php.ini for this lucid32 VM.

Not a problem it seems (it doesn’t stop the VM from running successfully), but if you wish to address it:

Troubleshooting problem 5: The box 'base' could not be found." error message seen after running vagrant up.

Remedy? Check the line containing the statement config.vm.box = etc. in your Vagrantfile (see my example Vagrantfile above) to ensure that it is referring to a Vagrant box (the OS install image) that actually exists on your system - issue command vagrant box list to see what boxes you have.

What exactly do the Vagrant commands do? - nice description

http://docs.vagrantup.com/v1/docs/boxes.html Where is Vagrant saving changes to the VM?

SSH key-based logins (logging into the VM box externally - i.e. from the host machine or from another machine):

For Windows SSH-based login to the VM:

Version history/updates of this answer

In your VM, you need to run:

Accept all the defaults.

After you have run this, there will be a configuration file in your ~/.chef/knife.rb.

As for your diagram: The vagrant folder contains the Vagrantfile for that project. The actual .ovf and .vmdk files, along with another Vagranfile, exists in /%USERPROFILE%/.vagrant.d/

The Vagranfile is the configuration file for Vagrant and exists in multiple places with a set order of precedence. The Vagranfile in your project folder takes precedence: Vagrantfile documentation.

Everything can be from localhost, including setting up a more complex Vagrant project with multiple VMs, as such.

EDIT: to make it clear that the 'knife configure' cmd should be run in the VM and to remove a spurrious Windows path reference.

Not the answer you're looking for? Browse other questions tagged windows-7 virtual-machine lamp vagrant knife or ask your own question.

136
How do I associate a Vagrant project directory with an existing VirtualBox VM?
103
Where is Vagrant saving changes to the VM?
97
What exactly do the Vagrant commands do?
1
How to run a LAMP stack through Vagrant
1
Different Php-Fpm containers with Apache

1
How to run a LAMP stack through Vagrant
2
How to setup vagrant with chef_solo without changing cookbooks
8
Best common workflow for Vagrant and Knife Solo (or any other non Vagrant Chef Env)?
1
Chef Apache2 recipe on RHEL: ServerName not defined in the default recipe
3
How to install rvm/ruby/rails via chef?
0
Set up Chef 11 and workstation. Knife suddenly creating cookbooks improperly, not finding knife.rb
1
Understanding Chef's runlist order
0
Vagrant Shell Provision LAMP Stack on Ubuntu 15.04
1
Windows - LAMP running on CentOS