In my DOM in AngularJS, I am using an ng-include inside a ng-repeat directive. It is loading the HTML just fine. Anyway, an issue I have is that I'm using JQuery (latest version) to bind a few mouse over and mouse click events on elements in the DOM with the same class as those added to the DOM by the ng-repeat and include. JQuery doesn't seem to apply the event handlers to the new DOM addition, though.

In previous versions .live() seemed to do what I want, but it has been removed in the latest version. Should I clear the bindings on the elements and re-create them every time the DOM has additional elements of the class added?

This is a multifaceted question. First of all, all jQuery code events should use $scope.$apply to execute angularjs code as expected. Example:

In the latest version of jQuery, in order to have events that update based on DOM changes, you want to 1. Get a selector for the nearest parent element (ex):

Thus, you want jQuery to have the events on the PARENT of the element so if the child elements change, it will still work:

Notice that the $scope.$apply() is used in order to enable jQuery to access those angular variables.

disclaimer: I have been learning angular myself so these are basically just half-educated guesses.

First, consider using angular directives for the job as stated by Bertrand and Mark.

Second, make sure that jquery gets loaded before angular, see here.

Third, it might be a (dynamic) binding issue, see here.

This question has already been nicely answered by Christian Stewart, but I just wanted to add something to his response.

I use the following code, and add the "cssClickableIcon" class to my buttons, so that when the user clicks on a button (or a div control), it shrinks inwards slightly. 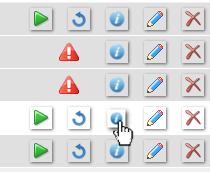 It's a little tweak, but has a really nice effect on a webpage. You really feel as though the webpage is more interactive, rather than flat, and that you have clicked on the control.

Because this uses jQuery's on function, this does work with buttons or other DOM elements created by an AngularJS ng-repeat command.

And, of course, if you're using Bootstrap's own button CSS classes, you can easily add this effect across all of your Bootstrap/Angular buttons using this:

I love this effect so much, and it's such a simple thing to add !

So, you can achieve the same effect using just this simple CSS:

Not the answer you're looking for? Browse other questions tagged jquery angularjs or ask your own question.

0
jQuery key event with angular
84
AngularJS + JQuery : How to get dynamic content working in angularjs
8
ngDialog not programmatically closing on IE but works on Chrome
1
How to catch click event on remote loaded data and displayed with angularJS
0
Update/apply ViewModel on event
1
Jquery code not working for paged records when apply paging (jQuery DataTable Plugin)
0
Bootstrap Accordion Suppress Open

507
jQuery Tips and Tricks
865
Changing the image source using jQuery
459
Can I use multiple versions of jQuery on the same page?
1095
How can I trigger the same function from multiple events with jQuery?
168
Should all jquery events be bound to $(document)?
1101
What is the difference between '@' and '=' in directive scope in AngularJS?
692
How do I bind to list of checkbox values with AngularJS?
1121
How do I use $scope.$watch and $scope.$apply in AngularJS?
305
What is the best way to conditionally apply attributes in AngularJS?