I learned about selector precedence from this tutorial. I have trouble understanding the behavior of this in one case. I have an element in HTML: 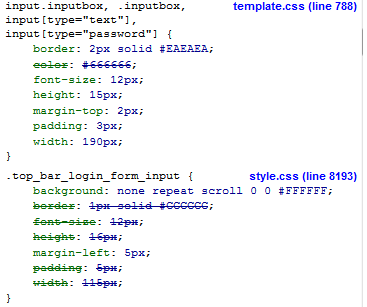 As shown in the picture above the class gets overridden by a less specific selector. The element gets selected by input[type="text"], which is less specific than a class. The only reasoning behind these behavior that I see is that the .inputbox class is also calculated in determining the precedence, even though it doesn't match the element.

Why does the type selector override the class selector?

The first rule is more specific than the second one because it has both a type and attribute part for the selector, and thus has precedence:

You'd think that the type="text" bit, which is an attribute selector, is more specific than a class selector, in accordance with the MDN page on specificity:

The following list of selectors is by increasing specificity:

The above quote was in the MDN article at the time this answer was written.

Why that is misleading:

The above only seems correct, but that's because you typically include the element in the selector (e.g. input[type="text"]) when doing an attribute selector. However, what's sneaky: the input bit matters.

Suppose we have the following markup:

In the following scenario the input renders red:

If we reverse the rules in a scenario, the input will render green:

This is because both selectors have equal specificity. Now introducing the input selector to the attribute rule will make one of them more specific, which can be seen in this scenario:

The W3 spec makes my head hurt, but it does have the details on why the above works. See also the answer by @BoltClock and comments in those code examples for info on how the specificity is calculated.

Your element is matching input[type="text"] in the first rule. Although the .inputbox selectors don't match it, that doesn't affect precedence because a comma-separated list of selectors only counts by the most specific selector in the list that does match an element. If none of the selectors match it then it doesn't count at all.

So it's the first selector being more specific than the second, and not the other way around.

If you qualify the class selector with a type so you have input.top_bar_login_form_input, the selectors will be balanced and your second rule will override the first.

3520
Set cellpadding and cellspacing in CSS?
1281
Which characters are valid in CSS class names/selectors?
3622
Is there a CSS parent selector?
807
What does the "+" (plus sign) CSS selector mean?
1578
Is there a "previous sibling" selector?
4173
Change a HTML5 input's placeholder color with CSS
1142
CSS selector for first element with class
1000
What does the "~" (tilde/squiggle/twiddle) CSS selector mean?
2982
Is it possible to apply CSS to half of a character?