I'm really new to this stuff so I apologize for the noobishness here.

The automate for each part of this (at least 2 a's, odd # of b's) are easy to make separately... Can anyone please explain a systematic way to combine them into one? Thanks.

You can use following simple steps to construct combined DFA.

2nd step : Rename every state in both DFA uniquely i.e. rename all states in DFA as Q0, Q1, Q2, Q3 , ... assuming you have started with subscript 0; that means none of the state would have same name.

3c. fill entire table while there is any Q[i,j] remaining in transition table.

4th step: Rename all Q[i, j] (uniquely) and draw DFA this will be your result. 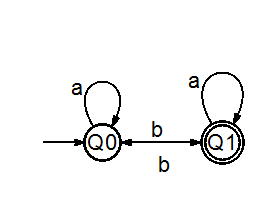 Step2:
Rename the stae of DFA1 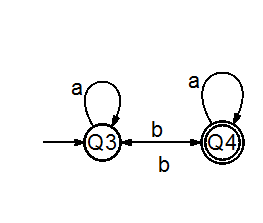 Step3(a,b,c):
Constructed transition table will be as. 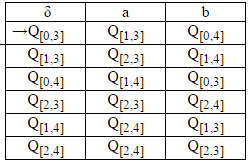 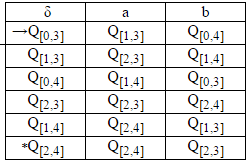 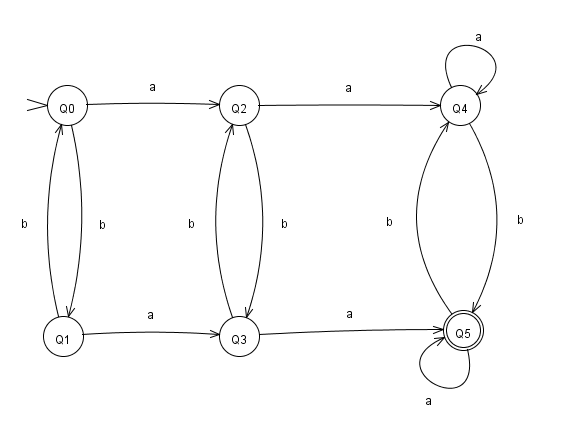 The Language L where a are at-least two and b are odd is an regular language. Its DFA is as below: 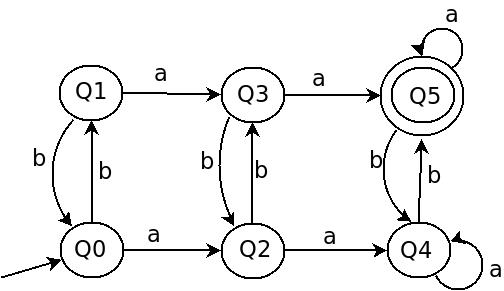 In this DFA I have combined two DFSs conceptually!

To draw this DFA you are always keep track how many bs has been come either even or odd. States 0, 2 and 4 means even number of b has been come. So you can divide this DFA in two parts vertically where bottom states at even bs and upper states at odd.

Also String is accepted if odd b hence final state should be in one of state in upper part.

not only number of bs is condition but a should be atleast 2. So you can divide this DFA horizontally in three parts where number of as are 0 at state-0 and 1, as are one at state-2 and 3 and as are 2 at state-4 and 5. After first two as any number of as are allow in string so there is self loop on state q4 and q5.

It's done using the product of two automata.

Not the answer you're looking for? Browse other questions tagged regular-language automata deterministic or ask your own question.