This will print false.

I'm confused. Can anyone give an explanation on this?

Thanks for your comments, in my compiler, the size of int is 4 bytes. I'm using VC for some simple testing. I've changed the description in my question.

That's a lot of very good replys in this post, AndreyT gave a very detailed explanation on how the compiler will behave on such input, and how this minimum integer was implemented. qPCR4vir on the other hand gave some related "curiosities" and how integers are represented. So impressive!

However, apparently in your case the range of long int is the same as range of int, and in general there's no integer type with greater range than int on your platform. This formally means that positive constant 2147483648 overflows all available signed integer types, which in turn means that the behavior of your program is undefined. (It is a bit strange that the language specification opts for undefined behavior in such cases, instead of requiring a diagnostic message, but that's the way it is.)

In practice, taking into account that the behavior is undefined, 2147483648 might get interpreted as some implementation-dependent negative value which happens to turn positive after having unary - applied to it. Alternatively, some implementations might decide to attempt using unsigned types to represent the value (for example, in C89/90 compilers were required to use unsigned long int, but not in C99 or C++). Implementations are allowed to do anything, since the behavior is undefined anyway.

As a side note, this is the reason why constants like INT_MIN are typically defined as

instead of the seemingly more straightforward

The latter would not work as intended.

The compiler (VC2012) promote to the "minimum" integers that can hold the values. In the first case, signed int (and long int) cannot (before the sign is applied), but unsigned int can: 2147483648 has unsigned int ???? type. In the second you force int from the unsigned.

The type of an integer literal is the first of the corresponding list in which its value can be represented. 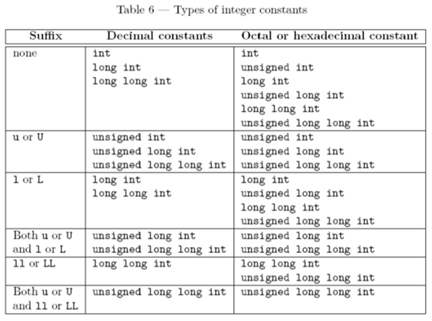 And these are the promotions rules for integers in the standard.

In addition, in the case of signed binary calculations, the most significant bit ("MSB") is the sign bit. This question may help explain why.

Wait! 8 overflows the integer! What do we do? Use its unsigned representation of 1000 and interpret the bits as a signed integer. This representation leaves us with -8 being applied the 2s complement negation resulting in 8, which, as we all know, is greater than 0.

Not the answer you're looking for? Browse other questions tagged c++ integer-overflow or ask your own question.

54
How to print function pointers with cout?
0
Basic integer explanation in C++
15
assigning true/false to std::string: what's going on?
0
Compiler error, mocking C++ unit test with static polymorpism
1
QMediaPlaylist::addMedia() returns true for nonexistent files
5
restrict a template function, to only allow certain types
1
Using std::ios::sync_with_stdio(false) can be faster than scanf and printf?
119
Why does the ternary operator with commas evaluate only one expression in the true case?
0
Ambiguous Overload For operator “<<”
0
C++ std::function is null for all instances of class exept first (only Visual2019 compiler problem)