creating a record with Ember.js & Ember-data & Rails and handling list of records

I'm building an app which has layout like below.

I want to create a new post so I pressed 'new post button' and it took me to 'posts/new' route.

My PostsNewRoute is like below (I followed the method described here)

It immediately create a new record, updates the list of the posts, and displays forms for new post. 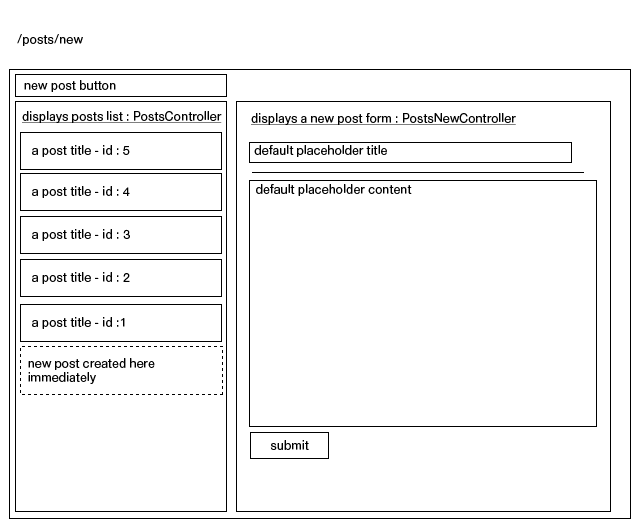 Now I have two problems.

so old Post sits below within existing posts. but newly created one is not. (which isn't commited to backend yet)

and It's very weird behavior that I must prevent.

I think there will be two solutions.

But sadly, I don't know where to start either way...

for solution 1, I totally get lost.

for solution 2, I don't know how to bind datas in input forms with not yet existing model.

for solution 3, I totally get lost.

Please help me! which will be ember's intended way?

I solved this problem by filtering 'arrangedContent' ,not 'content'

We use a variation of solution 3 in several places on our app. IMHO it's the cleanest of the 3 as you don't have to worry about setup/teardown on the server side This is how we implement it:

Then in your Posts template you loop through controller.filteredContent instead of controller.content.

For solution 1, there are many possibilities. You could define the following event:

It creates the post then sets up a promise that will be executed once "didCreate" fires on the post. This promise transitions to the post's route only after it has come back from the server, so it will have the correct ID.

Indeed, very nice write up. Thx for that.

Doesn't your filteredContent have to use the isNew state i.o. isDirty, otherwise the Post that is being edited will not be visible. In either case, the filteredContent property does not work in my case. I also noticed that, since I use an image as part of every element, all images will be refreshed when filteredContent is changed. This means that I see a request for every image.

I use a slightly different approach. I loop through the content and decide whether or not to display the Post in the template:

This will only show the Post object after it is saved. The url in the H3-tag also contain the id of the newly created object i.o. posts/null.

One other thing I noticed in your question: instead of passing default values to createRecord, you can use the defaultValues property on the model itself:

you can do this:

I actually wrote a function to reverse the content array a while back:

That's a pretty old article, almost a year old, so it probably won't work as is, but the framework is there...

You can see it in action in this mini-app I wrote:

Search for users in the input field at the top and watch the left side as they appear in order from newest to oldest (instead of oldest to newest).

8
transition after saving model of ember data
3
When to call createRecord and how to handle store transactions
3
Trouble with transitionTo route after adding a new record using ember data and Parse
0
loading data into store in ember data ver 1.0 via json with transformation
0
Ember.js not persisting records with shared templates
4
Ember-Data beta 3 and saving hasMany relationships and additonally one record with Rails
3
Temporary Non-Persistent Record with Ember-Data 1.0.0-beta
13
Ember Data belongsTo with Select dropdown view
0
"undefined" instead of ID in URL on transition in Ember and Ember Data