Function Prologue and Epilogue in C

I know data in nested function calls go to the Stack.The stack itself implements a step-by-step method for storing and retrieving data from the stack as the functions get called or returns.The name of these methods is most known as Prologue and Epilogue.

I tried with no success to search material on this topic. Do you guys know any resource ( site,video, article ) about how function prologue and epilogue works generally in C ? Or if you can explain would be even better.

P.S : I just want some general view, not too detailed.

There are lots of resources out there that explain this:

to name a few.

Basically, as you somewhat described, "the stack" serves several purposes in the execution of a program:

In IA-32 (x86) cdecl, the ebp register is used by the language to keep track of the function's stack frame. The esp register is used by the processor to point to the most recent addition (the top value) on the stack. (In optimized code, using ebp as a frame pointer is optional; other ways of unwinding the stack for exceptions are possible, so there's no actual requirement to spend instructions setting it up.)

The call instruction does two things: First it pushes the return address onto the stack, then it jumps to the function being called. Immediately after the call, esp points to the return address on the stack. (So on function entry, things are set up so a ret could execute to pop that return address back into EIP. The prologue points ESP somewhere else, which is part of why we need an epilogue.)

Then the prologue is executed:

At this point, we have:

I am quite late to the party & I am sure that in the last 7 years since the question was asked, you'd have gotten a way clearer understanding of things, that is of course if you chose to pursue the question any further. However, I thought I would still give a shot at especially the why part of the prolog & the epilog.

Also, the accepted answer elegantly & quite simply explains the how of the epilog & the prolog, with good references. I only intend to supplement that answer with the why (at least the logical why) part.

I will quote the below from the accepted answer & try to extend it's explanation.

The last line in the quote above says immediately after the call, esp points to the return address on the stack.

So let's say that our code that's getting currently executed has the following situation, as shown in the (really badly drawn) diagram below

So our next instruction to be executed is, say at the address 2. This is where the EIP is pointing. The current instruction has a function call (that would internally translate to the assembly call instruction).

Now ideally, because the EIP is pointing to the very next instruction, that would indeed be the next instruction to get executed. But since there's sort of a diversion from the current execution flow path, (that is now expected because of the call) the EIP's value would change. Why? Because now another instruction, that may be somewhere else, say at the address 1234 (or whatever), may need to get executed. But in order to complete the execution flow of the program as was intended by the programmer, after the diversion activities are done, the control must return back to the address 2 as that is what should have been executed next should the diversion have not happened. Let us call this address 2 as the return address in the context of the call that is being made.

So, before the diversion actually happens, the return address, 2, would need to be stored somewhere temporarily.

There could have been many choices of storing it in any of the available registers, or some memory location etc. But for (I believe good reason) it was decided that the return address would be stored onto the stack. 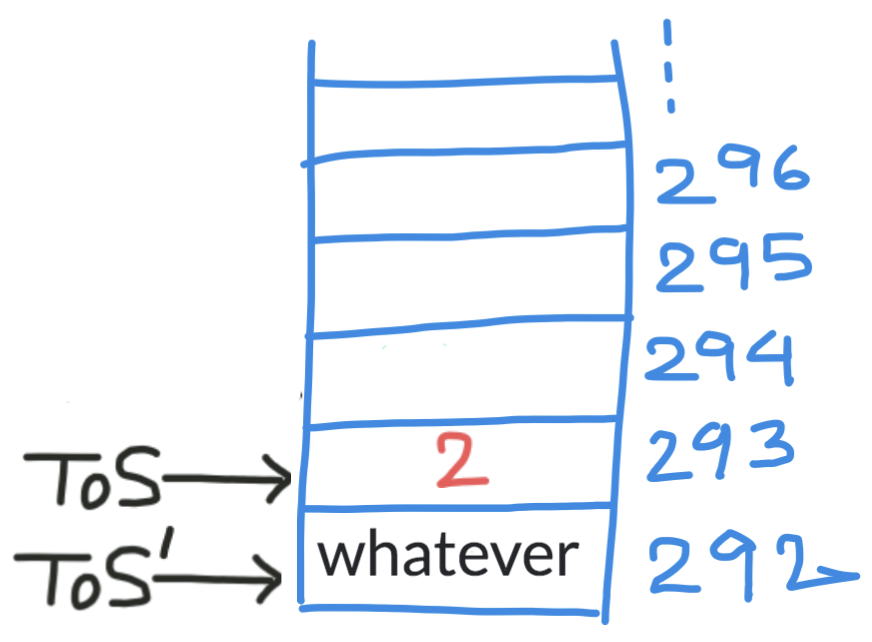 So it looks like now we have achieved our goal of temporarily storing the return address somewhere. We should now just go about making the diversion call. And we could. But there's a small problem. During the execution of the called function, the stack pointer, along with the other register values, could be manipulated multiple times.

So, although the return address of ours, is still stored on the stack, at location 293, after the called function finishes off executing, how would the execution flow know that it should now goto 293 & that's where it would find the return address?

So (I believe for good reason again) one of the ways of solving the above problem could be to store the stack address 293 (where the return address is) in a (designated) register called EBP. But then what about the contents of EBP? Would that not be overwritten? Sure, that's a valid point. So let's store the current contents of EBP on to the stack & then store this stack address into EBP. Something like this: 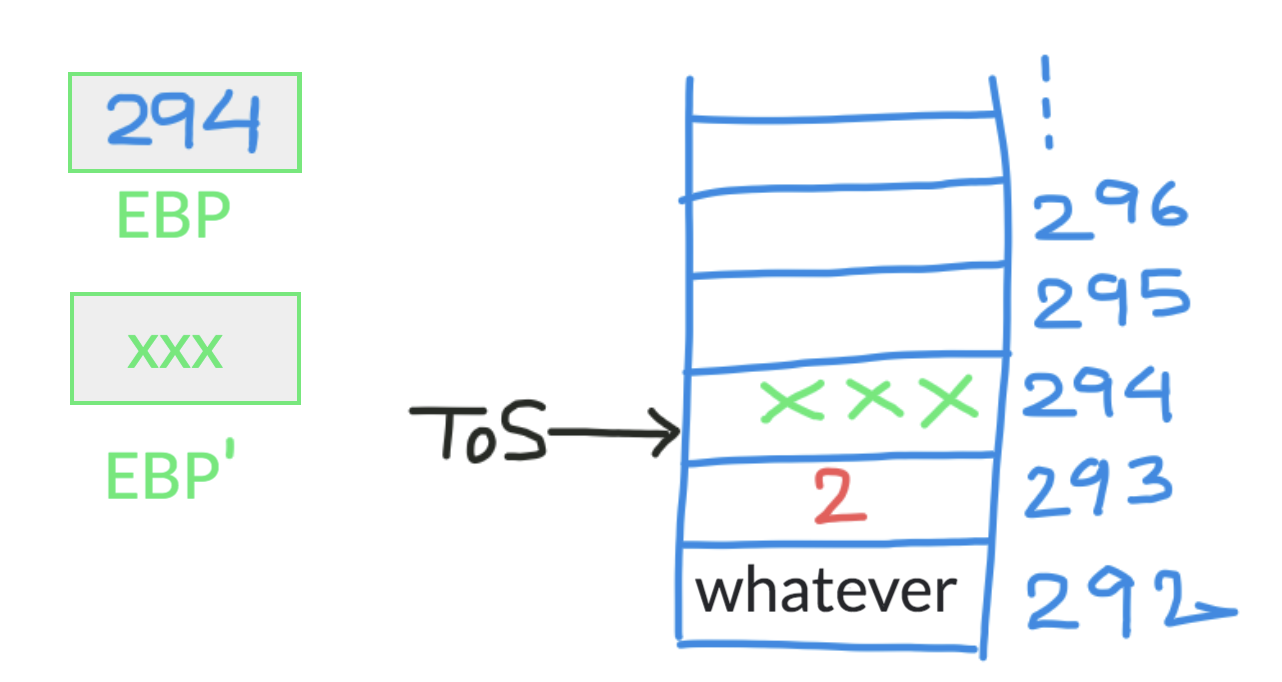 With the above strategy in place, we solve for the Problem 2 discussed above. How? So now when the execution flow wants to know where from should it fetch the return address, it would :

Just an end note: For the sake of brevity, I have not taken care of the fact that the stack addresses may grow the other way round.

Every function has an identical prologue(The starting of function code) and epilogue ( The ending of a function).

Prologue: The structure of Prologue is look like: push ebp mov esp,ebp

Epilogue: The structure of Prologue is look like: leave ret

More in detail : what is Prologue and Epilogue

1
What are the four execution steps before entering main?
0
Why do all C functions converted to assembler start and end with some identical operations?
2
Understanding x86-64 assembly for simple program in C with a function call
0
How do programs know how much space to allocate for local variables on the stack?
0
Returning directly to main from a function call of a function call
1
What does ebp and esp in a disassembly code mean?
0
how parse arm64 elf file?
0
What happens if we use return 1 in if statement that is inside a loop?

2909
What is the difference between #include <filename> and #include "filename"?
3008
How do I set, clear, and toggle a single bit?
3763
What are the differences between a pointer variable and a reference variable?
2089
What is a smart pointer and when should I use one?
2950
When should static_cast, dynamic_cast, const_cast, and reinterpret_cast be used?
4230
The Definitive C++ Book Guide and List
1440
How do function pointers in C work?
1682
What is the difference between const int*, const int * const, and int const *?
2282
What is the copy-and-swap idiom?
2384
What are the basic rules and idioms for operator overloading?