How to use GCC with Microsoft Visual Studio?

Alternately, are there any other good Windows IDEs for GCC besides NetBeans and Eclipse? (I hate both of them with a passion.)

There are several ways to go here:

Visual Studio 2005 and newer will let you register custom build tools. They tell the IDE how to transform files of one form (e.g. a .cpp file) into another form (e.g. an .obj file).

So far as I know, no one has done this yet for GCC. And, doing it yourself requires writing COM code, which is probably too deep a pool to dive into just for a single project. You'd have to have a compelling reason to take this project on.

You then have to manually adjust each project to tell it to use the custom build tool instead of the default, since you're using a file name extension (.cpp, probably) that Visual C++ already knows about. You'll run into trouble if you try to mix the VC++ and g++ compilers for a single executable built from multiple modules.

On the plus side, if you were looking to start an open source project, this sounds like a good one to me. I expect you'd quickly gather a big user base.

You can leave the Output (for debugging) field alone if you've named your executable after the project name and it lands where Visual Studio expects to find it.

Leave the rest of the fields alone unless you know what they are and why you want to change them. As an example, you might choose to pass a -D flag on the Preprocessor definitions line to get separate debug and release outputs. If you know you want this, you know how to set it up, so I'm not going to make this long answer even longer in order to explain it.

You'll be asked the same set of questions for the Release build. If you want to bother with separate debug and release builds, you'd make any changes here.

Having done all this, you still have to create the Makefile, and add a make.exe to your PATH. As with the debug vs. release question, going into that level of detail would push this answer off topic.

As ugly as this looks, it's still easier than creating custom build tools. Plus, you say you need to port to Unix eventually, so you're going to need that Makefile anyway.

You say you want to port this program to Unix at some point, but that doesn't mean you must use GCC on Windows now. It is quite possible to write your program so that it builds under Visual C++ on Windows and GCC/Makefiles on *ix systems.

There are several tools that make this easier. One very popular option is CMake, which is available as an installation time option in newer versions of Visual Studio. There are many alternatives such as SCons and Bakefile.

I'm from the future.

I keep (poking at) a C/C++ toolchain using Visual Code on Win/Lin/Mac and MinGW installed from Choclatey. (This was done for my sanity - install GDB and GCC however you want)

I've run it with GCC and GDB with IntelliSense using MS's own weird JSON makefiles. Someday, someone (you?) will write a Gradle or Python script to generate these; for now the examples online in the docs seem to work.

It seems to require three types of JSON thing;

You can use the Clang compiler with Visual Studio to target Android, iOS, and Windows.

If you are targeting Android, you can use the Clang/LLVM compiler that ships with the Android NDK and toolchain to build your project. Likewise, Visual Studio can use Clang running on a Mac to build projects targeting iOS. Support for Android and iOS is included in the “Mobile Development with C++” workload. For more information about targeting Android or iOS check out our posts tagged with the keywords “Android” and “iOS”.

If you are targeting Windows, you have a few options:

If your project targets Linux or Android, you can consider using GCC. Visual Studio’s C++ Android development natively supports building your projects with the GCC that ships with the Android NDK, just like it does for Clang. You can also target Linux – either remotely or locally with the Windows Subsystem for Linux – with GCC. 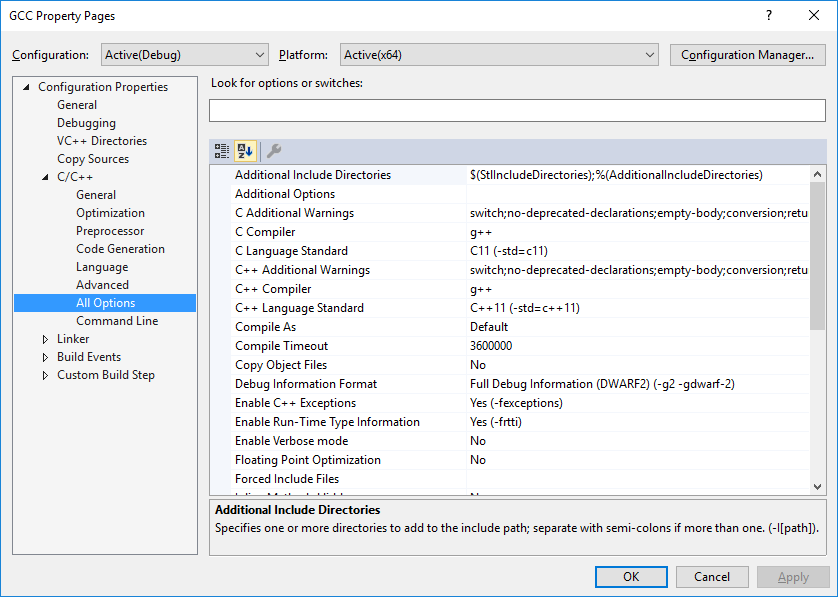 Check out our post on Visual C++ for Linux Development for much more info about how to use Visual Studio to target Linux with GCC. If you are specifically interested in targeting WSL locally, check out Targeting WSL from Visual Studio.

Not the answer you're looking for? Browse other questions tagged windows visual-studio gcc cygwin or ask your own question.