Finding the complement of a DFA?

Am I doing something wrong or is this RegEx supposed to not have a real complement?

As you says in question:

Its not complement, but you are doing something like reverse of a language and regular languages are closure under reversal.

What is the Reversal Language ?

Given that L is L(A) for some FA A, we can construct an automaton for LR:

Note: By reversing all its arrows and exchanging the roles of initial and accepting states of a DFA you may get an NFA instead.
that's why I written FA(not DFA)

Finding the complement of a DFA?

Defination: The complement of a language is defined in terms of set difference from Σ* (sigma star). that is L' = Σ* - L.

And the complement language (L') of L has all strings from Σ* (sigma star) except the strings in L. Σ* is all possible strings over the alphabet Σ.
Σ = Set of language symbols

A is DFA of L, D is for complement

Note: To construct complement DFA, old DFA must be a complete means there should all possible out going edge from each state(or in other words δ should be a complete function).

below is DFA named A: 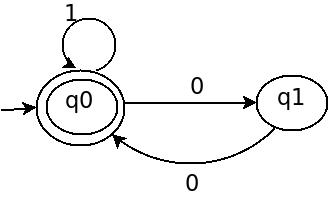 But not this DFA is not complete DFA. transition function δ is partially defined but not for full domain Q×Σ (missing out going edge from q1 for lable 1).

Its complete DFA can be as follows (A):

In the above DFA, all possible transactions are defined (*for every pair of Q,Σ *) and δ is a complete function in this case.

Reff: to learn what is Partial Function.

So in complement q0 become non-final and q1, q2 are the final states.

Now you can write Regular expression for complement language using ARDEN'S THEOREM and DFA I given.

Here I am writing Regular Expression for complement directly:

where ^ is null symbol.

some helpful links:
From here and through my profile you can find some more helpful answers on FA. Also, two good links on properties of regular language: one, second

Not the answer you're looking for? Browse other questions tagged regex regular-language automata dfa nfa or ask your own question.

5
What is the language of this deterministic finite automata?
7
How does “δ:Q×Σ→Q” read in the definition of a DFA (deterministic finite automaton)?
15
Is there a way to negate a regular expression?
5
drawing minmal DFA for the given regular expression
4
Show that the following set over {a,b} is regular
2
Why the need for terminals? Is my solution sufficient enough?
3
Is this language regular
1
python complementing a complex regular expression
1
Finite Automata Definition of language
2
Given Two Regex, Determine if One is a Complement of Other
See more linked questions

10
A succinct description of NFA to DFA conversion?
8
Regular expression that generates a DFA with dead or superfluous states
4
DFA minimization
2
Given a sequence of symbols, how to find the minimal DFA that can accept it?
1
Matching a string with a regex in Java
1291
\d less efficient than [0-9]
0
Intersection of two DFA, how many states? Final States?
1
Finding the complement of a DFA structure
1
DFA and Regular Expression