I use this handy equation to search for a term inside of a cell in excel.

This equation searches for the presence of Gingrich in C1, if it exists, it displays a 1.

All I'd like to do is search for more than one term at a time. Anyone know how to add an OR function into this so I can search for Gingrich OR Obama OR Romney etc... ?

The wildcards are not necessary at all in the Search() function, since Search() returns the position of the found string.

This will do it for you:

Given this function in the column to the right of the names (which are in column C), the result is:

In addition to the answer of @teylyn, I would like to add that you can put the string of multiple search terms inside a SINGLE cell (as opposed to using a different cell for each term and then using that range as argument to SEARCH), using named ranges and the EVALUATE function as I found from this link.

For example, I put the following terms as text in a cell, $G$1:

Then, I defined a named range named search_terms for that cell as described in the link above and shown in the figure below: 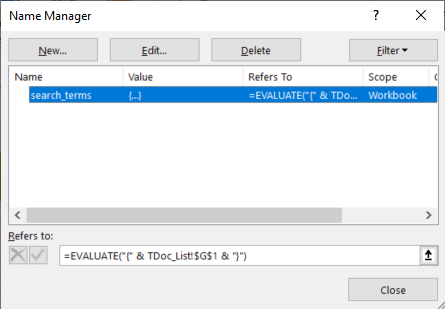 In the Refers to: field I put the following:

to be used as input to the SEARCH function: using a direct reference to the SINGLE cell $G$1 (augmented with the curly braces in that case) inside SEARCH does not work, hence the use of named ranges and EVALUATE.

The trick now consists in replacing the direct reference to $G$1 by the EVALUATE-augmented named range search_terms.

It really works, and shows once more how powerful Excel really is!

Not the answer you're looking for? Browse other questions tagged excel excel-2007 excel-formula excel-2010 excel-2013 or ask your own question.

2025
How do I create an Excel (.XLS and .XLSX) file in C# without installing Microsoft Office?
232
Return empty cell from formula in Excel
141
Importing CSV with line breaks in Excel 2007
679
How to use Regular Expressions (Regex) in Microsoft Excel both in-cell and loops
2
How do I search and display data to a cell on excel?
3
Excel 2016: Searching for multiple terms in a cell
0
How to Check a Cell for Multiple Text Strings
0
Excel evaluating text strings in cell