I'm making a website with a simple 2 column layout. The columns will be of varying height (one taller than the other) and dynamic height (each page's content is different). The two columns' background color should extend down to the lowest point of the longest column's content.

For the visual learners among you, CSS-Tricks has some nice illustrations 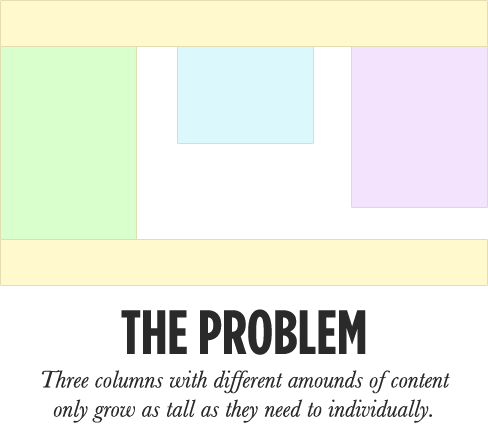 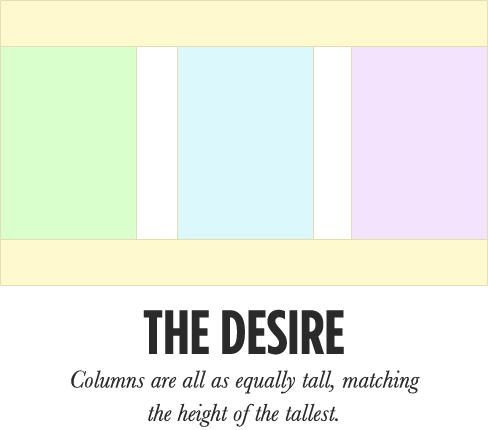 I'm using the One True Layout Method, mentioned on the same CSS-Tricks page about half way down.

I've recreated it on jsFiddle here.

Here is the relevant coding

The layout works entirely as expected. The column heights adapt to dynamic content and always remain the same height as each other.

Anchors break it. That is to say, the page scrolls down to the proper anchor in the content, but everything above the anchor is hidden. I learned this is due to overflow-y:hidden; - the page is scrolling down to the content and instead of using a scroll bar it's hiding the above content and not just scrolling past it. Disabling overflow:hidden shows all content as expected, but this is not ideal due to the large bottom padding.

Other's have experienced this same problem with no recognized solutions that I could find.

I could put together a quick height check in JavaScript and set each column accordingly, but I'd really like to keep overall site layout JS free.

Some articles had mentioned absolute positioning fixed, but this won't work with dynamic content.

Change to a different column height method. But... but... but I already have this one so far! And who are we to simply cave in to an impossible a difficult coding challenge.. :)

The Call for Aid

Since you indicated you don't necessarily care about IE7 support, you can use one of the other techniques (also found in the CSS Tricks link you referenced in your question) to use the display: table and table-cell.

This gives you the same equal height columns regardless of the dynamic content but also allows you to scroll up after clicking an in-page anchor without hiding the content completely out of view.

I really despise using invisible tables for layout purposes but in this case it doesn't force any additional DOM elements by just changing the DIV display attribute values, and isn't really any more hacky than the negative-margin positive-padding approach.

you are tricking the browser but it has a side affect (it breaks the anchor). the best solution would be finding a different method for adjusting the column height but it looks like in that area you've done more research then i anyway.

this snippet should work for you

or on jsfiddle with a little extra code to account for other situations as well http://jsfiddle.net/joshK/P72LV/5/

Not the answer you're looking for? Browse other questions tagged html css fluid-layout or ask your own question.

334
How do you get the footer to stay at the bottom of a Web page?
1098
Adding HTML entities using CSS content
828
Should I make HTML Anchors with 'name' or 'id'?
858
CSS 100% height with padding/margin
429
make div's height expand with its content
2597
How can I transition height: 0; to height: auto; using CSS?
1011
Can I set subject/content of email using mailto:?
1091
How can I make Bootstrap columns all the same height?
0
Using CSS to create two equal height layout columns, and inserting three equal height stacked columns inside the right column