How to open chrome apps as a regular tab with its api?

I want to develop a packaged chrome app (not extension) and hope to could open it as a regular tab like the image showing below. 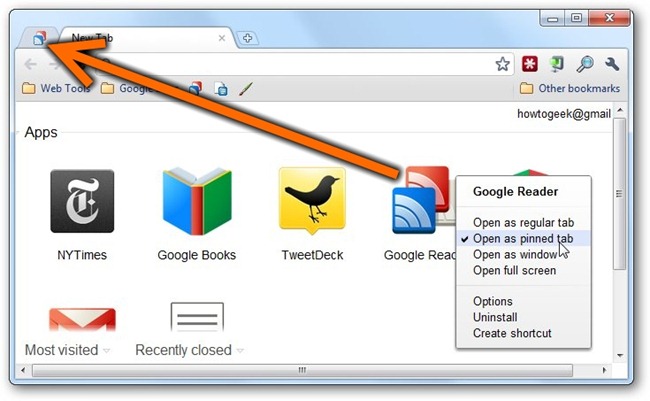 I followed the official docs to make my first app:
http://developer.chrome.com/apps/first_app.html

But it can not show the four options which are open as regular tab, pinned tab, window and full screen.

After searched again and again in the chrome official site and SO or anywhere else in my time, I could not find out how to make it.

I think its the manifest file's job, but I could not find any clue in its description, either. http://developer.chrome.com/apps/manifest.html

Can somebody give me some hints?

You can't set the tab behavior for Chrome Packaged Apps, only in Chrome Hosted Apps. There are a lot of differences between them, but a very short and simplistic definition is:

If you want to develop a hosted app, this is the documentation.

For Packaged apps, the doc is the one you've mentioned.

1411
How to manually send HTTP POST requests from Firefox or Chrome browser
1220
How do I get ASP.NET Web API to return JSON instead of XML using Chrome?
749
How to set a JavaScript breakpoint from code in Chrome?
366
Automatically open Chrome developer tools when new tab/new window is opened
5
Open a Chrome app within a tab
0
Chrome Packaged App: Open Website in New Tab
374
No “Proceed Anyway” option on NET::ERR_CERT_INVALID in Chrome on MacOS