How to set javascript variables using MVC4 with Razor

Can someone format the code below so that I can set srcript variables with c# code using razor?

The below does not work, i've got it that way to make is easy for someone to help.

I am getting a design time error

You should take a look at the output that your razor page is resulting. Actually, you need to know what is executed by server-side and client-side. Try this: 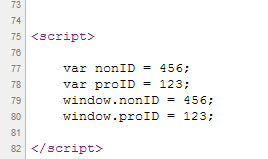 Depending what version of Visual Studio you are using, it point some highlights in the design-time for views with razor.

Since razor syntax errors can become problematic while you're working on the view, I totally get why you'd want to avoid them. Here's a couple other options.

The quotes act as delimiters, so the razor parser is happy. But of course your C# int becomes a JS string in the first statement. For purists, the second option might be better.

If somebody has a better way of doing this without the razor syntax errors, in particular maintaining the type of the var, I'd love to see it!

This is how I solved the problem:

It is self-documenting and it doesn't involve conversion to and from text.

Note: be careful to use the Number() function not create new Number() objects - as the exactly equals operator may behave in a non-obvious way:

I've seen several approaches to working around the bug, and I ran some timing tests to see what works for speed (http://jsfiddle.net/5dwwy/)

Using each approach mentioned above, a for-loop repeats each function call 10M times, getting the total time for the entire loop. Then, that for-loop is repeated 30 times to obtain an average time per 10M actions. These times were then compared to each other to determine which actions were faster than others.

Note that since it is JavaScript running, the actual numbers other people receive will differ, but the importance is not in the actual number, but how the numbers compare to the other numbers.

The cleanest code to understand is the Direct assignment. However, because of the bug in Visual Studio, this reports an error and could cause issues with Intellisense and give a vague sense of being wrong.

The fastest code was the simple function call, but only by a slim margin. Since I didn't do further analysis, I do not know if this difference has a statistical significance. The type-checking function was also very fast, only slightly slower than a direct assignment, and includes the possibility that the variable may be null. It's not really practical, though, because even the basic function will return undefined if the parameter is undefined (null in razor syntax).

Parsing the razor value as an int and running it through the constructor were extremely slow, on the order of 15x slower than a direct assignment. Most likely the Number constructor is actually internally calling parseInt, which would explain why it takes longer than a simple parseInt. However, they do have the advantage of being more meaningful, without requiring an externally-defined (ie somewhere else in the file or application) function to execute, with the Number constructor actually minimizing the visible casting of an integer to a string.

Bottom line, these numbers were generated running through 10M iterations. On a single item, the speed is incalculably small. For most, simply running it through the Number constructor might be the most readable code, despite being the slowest.

One of the easy way is:

And then get the value in javascript:

I found a very clean solution that allows separate logic and GUI:

in your razor .cshtml page try this:

in your .js file or .ts (if you use typeScript) to read stored value from your view put some like this (jquery library is required):

Not so much an answer as a cautionary tale: this was bugging me as well - and I thought I had a solution by pre-pending a zero and using the @(...) syntax. i.e your code would have been:

What I didn't realise was that this is how JavaScript (version 3) represents octal/base-8 numbers and is actually altering the value. Additionally, if you are using the "use strict"; command then it will break your code entirely as octal numbers have been removed.

I'm still looking for a proper solution to this.

A bit odd for sure, but no more fake syntax errors at least. Sadly the errors are still reported in VS2013, so this hasn't been properly addressed (yet).

I've been looking into this approach:

To me this seems to make it safer on the JS side... worst case you end up with a null variable.

This should cover all major types:

And in your .cshtml file inside the <script> tag:

Note that for string values, you'll have to use the @ViewBagUtils expression inside single (or double) quotes, like so:

I use a very simple function to solve syntax errors in body of JavaScript codes that mixed with Razor codes ;)

This sets a JavaScript var for me directly from a web.config defined appSetting..

you can parse any razor object into a JavaScript object.

It's long but universal

3
razor engine syntax inside javascript tag for non string variables
0
How to get local parameter in jquery?
2
Mixing Razor and Javascript: Assigning a number from Model to a Javascript variable in a view
2
Use c# variable in Jquery
3
Convert razor c# string to jquery string
1
What are some good free charts that can be used at ASP.NET MVC website?
0
Setting a JavaScript variable value inside razor view code to either a model value or a JavaScript value
0
ASP.NET accessing info from database and using it as variable
0
Use of C# static string in a typescript class