Difference between typeof, __typeof and __typeof__ in Objective-C

In Objective-C I often use __typeof__(obj) when dealing with blocks etc. Why not __typeof(obj) or typeof(obj).

__typeof__() and __typeof() are compiler-specific extensions to the C language, because standard C does not include such an operator. Standard C requires compilers to prefix language extensions with a double-underscore (which is also why you should never do so for your own functions, variables, etc.)

typeof() is exactly the same, but throws the underscores out the window with the understanding that every modern compiler supports it. (Actually, now that I think about it, Visual C++ might not. It does support decltype() though, which generally provides the same behaviour as typeof().)

All three mean the same thing, but none are standard C so a conforming compiler may choose to make any mean something different.

As others have mentioned, typeof() is an extension of C that has various support in respective compilers.
If you happen to be writing Objective-C for iOS or Mac apps, chances are good that you will be compiling your app with the Clang compiler.

Clang does support the use of typeof(), but technically it's for when your C Language Dialect is set to be a gnu* type. However __typeof__() is supported in both c* and gnu* language dialects - as detailed in the Clang documentation.

Now if you're writing your code with Xcode, the default setting for the C language dialect appears to be GNU99 and the option of allowing 'asm' 'inline' 'typeof' is set to Yes, so using typeof() won't bring you any problems. 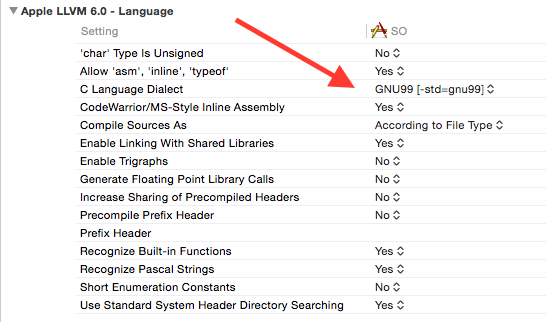 If you want to be (arguably) safer when using the Clang compiler, use __typeof__(). This way you won't be affected if the C Language Dialect being used for compilation changes or if someone decides to turn off the allowance of 'typeof'.

Hope this will be helpfull:

-ansi and the various -std options disable certain keywords. This causes trouble when you want to use GNU C extensions, or a general-purpose header file that should be usable by all programs, including ISO C programs. The keywords asm, typeof and inline are not available in programs compiled with -ansi or -std (although inline can be used in a program compiled with -std=c99 or -std=c11). The ISO C99 keyword restrict is only available when -std=gnu99 (which will eventually be the default) or -std=c99 (or the equivalent -std=iso9899:1999), or an option for a later standard version, is used.

The way to solve these problems is to put ‘__’ at the beginning and end of each problematical keyword. For example, use __asm__ instead of asm, and __inline__ instead of inline.

Not the answer you're looking for? Browse other questions tagged objective-c or ask your own question.

13
How to get the type of a variable in C code?
6
Is there any difference between __typeof and typeof?
2
__weak typeof(self) weakSelf = self OR __weak MyObject *weakSelf = self?
3
iOS Objective-C: weakSelf Syntax
1
iOS take textview value to alertController.textFields. in alert controller block
0
Implementing min function in C by using typeof compiler extension gives error