I am trying to achieve the following effect:

A UICollectionView displays a grid of cells for a parent type of object, e. g. a photo album. When I tap one of these items, I would like to scroll that element to the top of the screen and open a Springboard like folder from it. Inside that folders area, another collection should be shown, consisting of the detail items, i. e. the individual photos of that album. Tapping in the remaining "parent" view closes the folder again. See this schema: 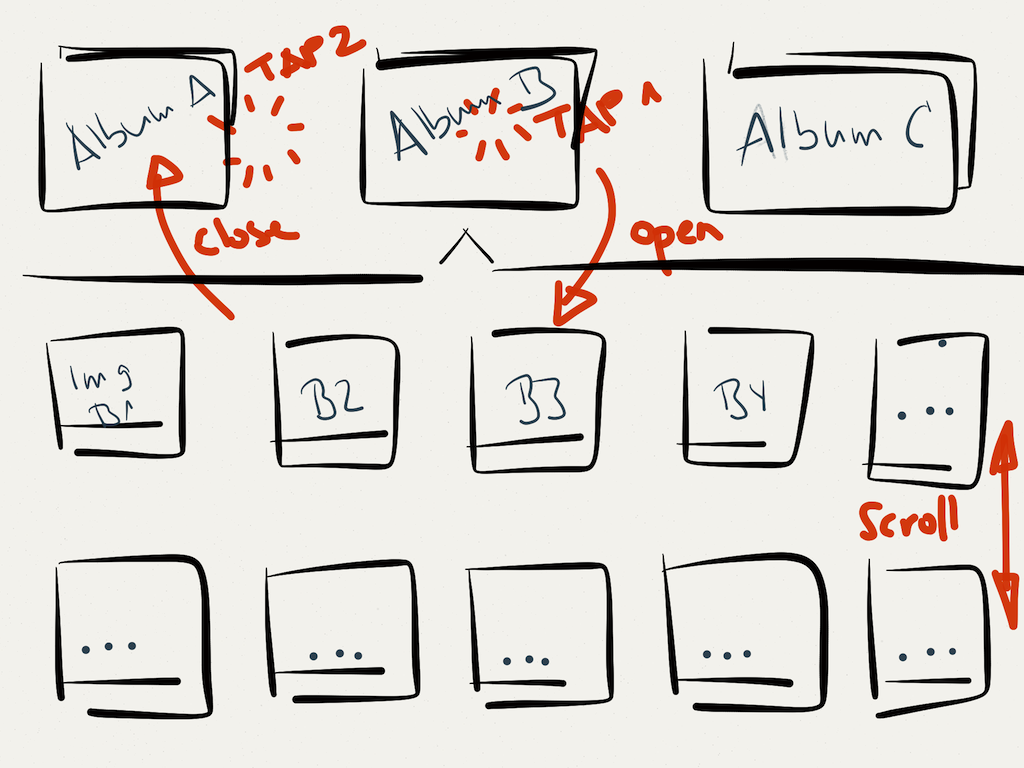 What I have done so far is a regular collection view for the albums. When I select one, it scrolls to selected item to the top and then uses JWFolders to open an empty folder at that place. Once that is shown, I trigger the surrounding UINavigationController to push my 2nd view controller with the detail items. That one is layed out so it appears to the user as if it were still the same view.

There are several problems with this approach, and I would like to know how to do this better:

I would like to get pointers as to how to approach this problem in a maintainable manner that does not require to much creative hacking against what the frameworks are designed to do. I might be missing something obvious here, so pointers to examples or general advice are appreciated.

I changed the approach a bit. Now I use a container view controller that has two embedded collection view controllers. One for the "Album" and one for the "Photos" part at the bottom. Using a UIImageView in the middle between the two I can get the triangle pointing upward done. This is also nice from a maintenance point of view, because it makes maintenance easier with the two collections being handled completely separately.

The app uses Auto Layout, so I can change the amount of space each of the two embedded views takes by modifying the constraints. This is way faster than the screenshot based approach with JWFolders and works nicely on an iPad3 as well.

This almost gets me where I want to be. The one thing that remains is to get the opening animation right. I would like to simultaneously scroll the Albums collection, so that the tapped item goes to the top and expand the photos collection with the triangle pointing at the Album cell.

Can I somehow "connect" the lower view to that cell via layout constraints, so that the scrollToItemAtIndexPath:atScrollPosition:animated: call drags the lower view open?

To get around it I would lose the library and cause iOS to move those display elements around without screenshots or other tricks. On the tap, cause the tapped icon to retain its normal appearance while you dim all the others. Find the contents of the collection view from the top to the end of the line where the tapped icon is. Create two new collection views - one which contains the top half, including your tapped icon and one containing the rest, below. Animate those views apart to make room for the folder view.

The folder view is another UICollectionView that appears in the gap created. In the main view there are either one or three views presented depending on whether the drawer is open or closed. I would probably look at creating a view controller with a collection view, and using view controller containment to manage all three views. You have complete control over how those views are presented, so you could animate top and bottom views up and down simultaneously to reveal the folder view in place, as Springboard does.

When that's all working then you could generalize and start doing things like deciding to make the tapped icon part of the bottom collection with the folder appearing above if the icon was low on the screen.

(I hesitate to answer this because of the large number of upvotes yet no answers, so I may have missed something - but that is how I would begin trying to achieve the Springboard effect.)

Not the answer you're looking for? Browse other questions tagged ios xcode cocoa-touch ios6 uicollectionview or ask your own question.