I am having trouble understanding java.sql.timestamp.

If I run the java deprecated constructors:

Daylight savings occurs (at least in my country) around these times. But the dates before and after the time are not moved. Why are two separate hours returning the same time?

I would like to get the timestamp just as my input, How can I force this?

Using System.currentTimeMillis(); gives you Greenwich Mean Time which is unaffected by daylight savings, leap seconds and other surprise adjustments to the date.

Or Specify the timezone manually:

Source: Get GMT Time in Java

The Daylight Saving Time (DST) cut-over means the 2 AM hour never existed. So you are giving invalid inputs.

The ZonedDateTime class tries to help by adjusting your time-of-day input, jumping to 3 AM just as the clock jumped an hour than morning when striking 02:00.

java.sql.Timestamp is a terrible class, along with its sibling classes such as java.util.Date and Calendar/GregorianCalendar. Among its many design problems is is messy handling of time zones.

Instead, use only the modern java.time classes.

For moments (a date, a time-of-day, and a time zone or offset-from-UTC), use one of these classes:

It sounds like you were intending to use a date-time in your own zone.

Specify a proper time zone name in the format of Continent/Region, such as America/Montreal, Africa/Casablanca, or Pacific/Auckland. Never use the 2-4 letter abbreviation such as EST or IST as they are not true time zones, not standardized, and not even unique(!).

If you want to use the JVM’s current default time zone, ask for it and pass as an argument. If omitted, the code becomes ambiguous to read in that we do not know for certain if you intended to use the default or if you, like so many programmers, were unaware of the issue.

Specify a time and a date as seen in the wall-clock time used by the people of a particular region (a time zone).

We see a surprise on the third item, where we ask for 2 AM but get 3 AM back. This is understandable, because of a Daylight Saving Time (DST) cut-over or “Spring ahead”. Starting in 2005, Tunisia adopted DST. Later in 2009 they came to their senses and returned to standard time only.

The 2 AM hour does not exist

So there is no 2 AM on that date in Tunisia. When the clock struck 2 AM, it jumped to 3 AM. The 2 AM hour never existed. That day is only 23-hours long rather than the usual 24 hours long. So our code above asked for an invalid date-time. The ZonedDateTime class, rather than throw an Exception, tries to help us out by adjusting to a valid time-of-day. The JavaDoc for ZonedDateTime.of spells this out:

Obtains an instance of ZonedDateTime from a year, month, day, hour, minute, second, nanosecond and time-zone.

In most cases, there is only one valid offset for a local date-time. In the case of an overlap, when clocks are set back, there are two valid offsets. This method uses the earlier offset typically corresponding to "summer".

In the case of a gap, when clocks jump forward, there is no valid offset. Instead, the local date-time is adjusted to be later by the length of the gap. For a typical one hour daylight savings change, the local date-time will be moved one hour later into the offset typically corresponding to "summer".

So the behavior is a feature, not a bug. 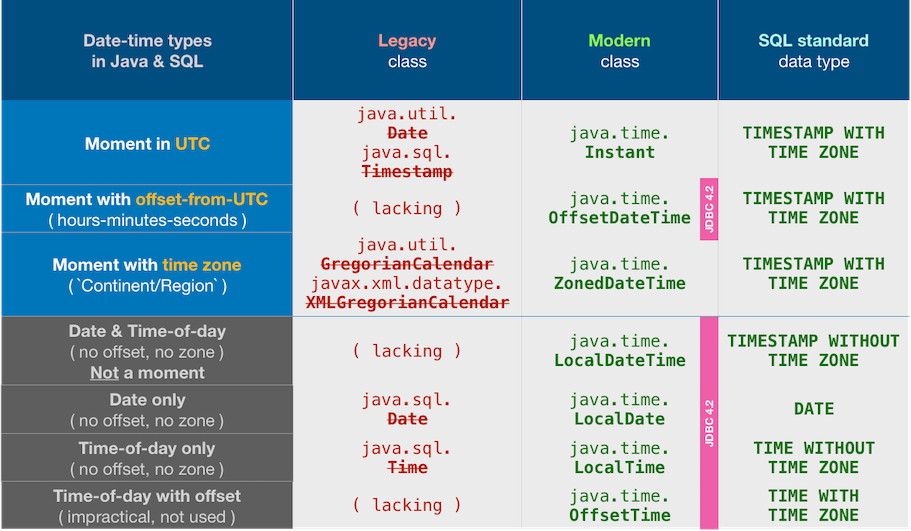 3162
Add a column with a default value to an existing table in SQL Server
2821
How can I create an executable/runnable JAR with dependencies using Maven?
358
Number of days between two dates in Joda-Time
0
Javascript date daylight savings issue
1
Daylight savings time being added when string is converted to Timestamp in Java
2
Linux daylight savings notification