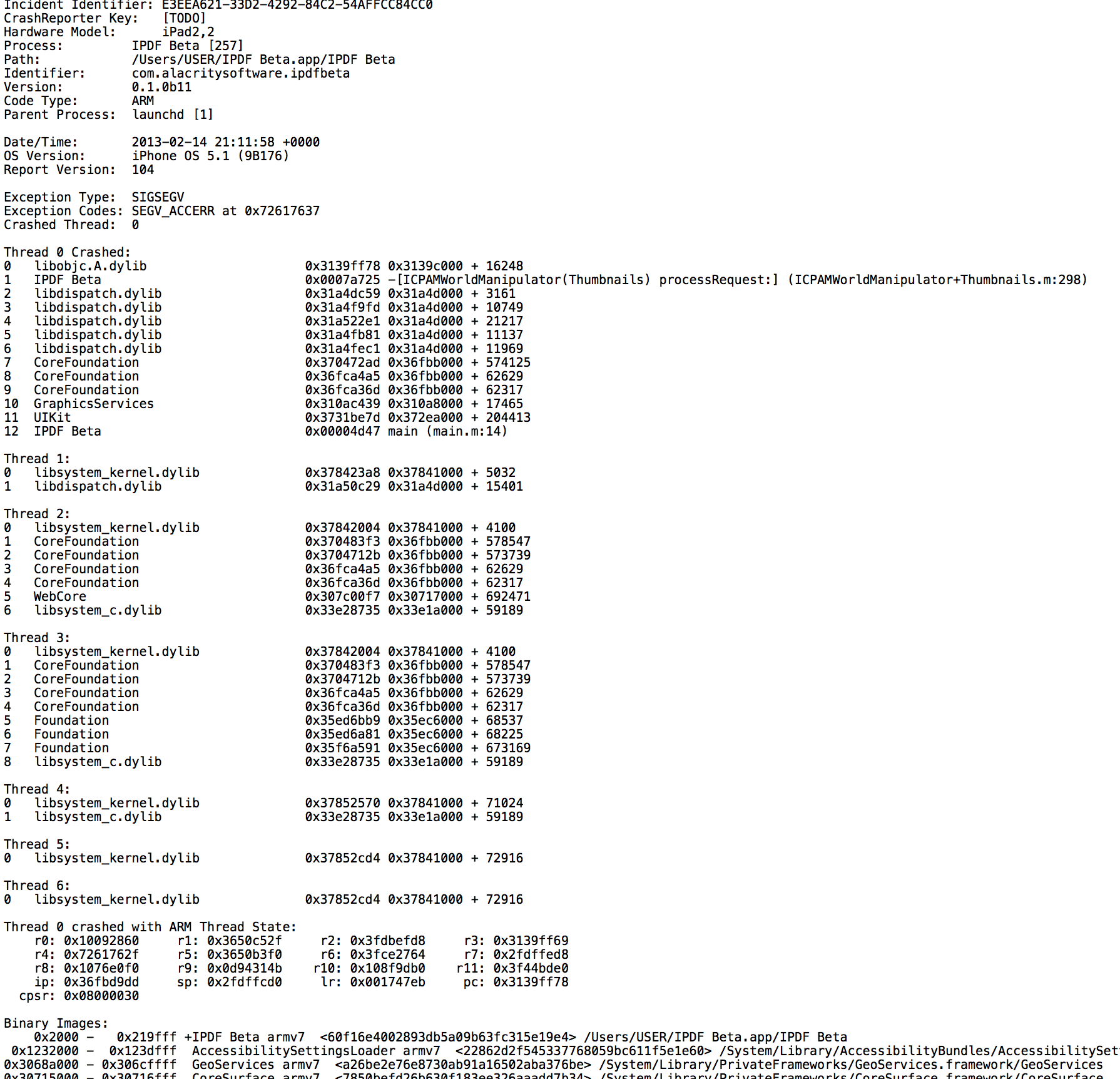 As you can see, only the app (IPDF Beta) shows any intelligible method names and everything else is gook. The reason is obviously that I don't have the 5.1 software image installed, and I have no clue where to get my hands on it. Xcode doesn't have any download features (I already tried grabbing the 5.1 simulator download, but that apparently doesn't include the device image).

Should Xcode be able to symbolicate despite not having the software image for the crashy version? If so, any pointers on how to make this happen? If not, what's the proper way to get my hands on the image aside from absurd suggestions like finding old Xcode versions etc?

To symbolicate the crash reports you will need the actual symbols. And having the images of the iOS versions do not help. You need to install them on an actual device and then Xcode will be able to grab the symbols from the device. But if you don't have a device with even older iOS versions you can't install them.

So the only chance left is to download old Xcode versions which do have to symbols bundled as it is mentioned by Ryan Poolos in his answer: https://stackoverflow.com/a/14941919/474794

Once downloaded, extract Xcode into a temporary folder, go into the folder Xcode.app/Contents/Developer/Platforms/iPhoneOS.platform/DeviceSupport/ and copy the subdirectories into ~/Library/Developer/Xcode/iOS DeviceSupport/.

If the folder is a symbolic link into another SDK folder inside the Xcode directory structure, it's better to copy the actual content from there into the new destination. Make sure to keep the directory structure identical in the target directory, because the symbolication process relies on it.

So the target structure below ~/Library/Developer/Xcode/iOS DeviceSupport/ will be something like 5.1 (9B176)/Symbols/ and then three subdirectories Developer, System and usr with more content down for each iOS version.

Note: Since iOS 5.0 there can be multiple builds for each iOS version. One for armv7 and another for armv7s.

Old iOS versions can be downloaded from Apple. But they are embedded with old versions of Xcode. So you'll need to download Xcode and then pull out the SDK image.

You can get the image here /Applications/Xcode.app/Contents/Developer/Platforms/iPhoneOS.platform/Developer/SDKs according to this SO question: https://stackoverflow.com/a/12602603/563381

Not the answer you're looking for? Browse other questions tagged ios objective-c xcode symbolicatecrash or ask your own question.

0
Software Image Not Found (4.3.3 with XCode 4.0.2)
140
UIWebView background is set to Clear Color, but it is not transparent
5
Force download iOS 5.0.1 symbols
0
'Xcode could not find software image to install in this version' xcode 4.5
285
Processing Symbol Files in Xcode
0
Selection of the ios on the simulator Xcode
49
Error opening iOS Simulator with iOS 8 beta version: “Unable to boot the iOS Simulator”
876
Xcode error “Could not find Developer Disk Image”
1
OS X 10.11 beta 6 and Xcode problems
292
Updating to latest version of CocoaPods?