Why HBase is a better choice than Cassandra with Hadoop?

Why is using HBase a better choice than using Cassandra with Hadoop?

Can anyone please give a detailed explanation on this?

I don't think either is better than the others, it's not just one or the other. These are very different systems, each with their strengths and weaknesses, so it really depends on your use cases. They can definitely be used in complement of one another in the same infrastructure.

To explain the difference better I'd like to borrow a picture from Cassandra: the Definitive Guide, where they go over the CAP theorem. What they say is basically for any distributed system, you have to find a balance between consistency, availability and partition tolerance, and you can only realistically satisfy 2 of these properties. From that you can see that: 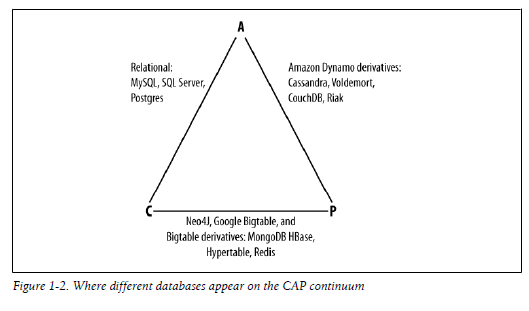 When it comes to Hadoop, HBase is built on top of HDFS, which makes it pretty convenient to use if you already have a Hadoop stack. It is also supported by Cloudera, which is a standard enterprise distribution for Hadoop.

But Cassandra also has more integration with Hadoop, namely Datastax Brisk which is gaining popularity. You can also now natively stream data from the output of a Hadoop job into a Cassandra cluster using some Cassandra-provided output format (BulkOutputFormat for example), we are no longer to the point where Cassandra was just a standalone project.

In my experience, I've found that Cassandra is awesome for random reads, and not so much for scans

To put a little color to the picture, I've been using both at my job in the same infrastructure, and HBase has a very different purpose than Cassandra. I've used Cassandra mostly for real-time very fast lookups, while I've used HBase more for heavy ETL batch jobs with lower latency requirements.

This is a question that would truly be worthy of a blog post, so instead of going on and on I'd like to point you to an article which sums up a lot of the keys differences between the 2 systems. Bottom line is, there is no superior solution IMHO, and you should really think about your use cases to see which system is better suited.

We have to compare pros & cons both databases and take a guarded decision depending on business requirements.

Have a look at article 1 , article 2 and this presentation for further details.

Not the answer you're looking for? Browse other questions tagged hadoop cassandra nosql hbase cap-theorem or ask your own question.

9
Hadoop and HBase
8
HBASE 0.94.1 compatibility with hadoop
0
Which has better performance with map reduce- Hbase or Cassandra?
137
Difference between HBase and Hadoop/HDFS
1
1 big Hadoop and Hbase cluster vs 1 Hadoop cluster + 1 Hbase cluster
4
Installing Cassandra in a Hadoop Cluster
1
Cassandra vs HBase for Hadoop jobs
1
hbase vs cassandra for messaging
3
Is Cassandra comparable to HBase?