Some of the projects in my solution that include the code depend on other modules that also include it, resulting in warning CS0436:

I have tried declaring a class alias, but the definitions internal to licence.cs cause the same warning. In the alias, there must be a reference to the duplicated class name which causes the same warning.

I know it is bad practice to duplicate source between assemblies, but it is intentional in this case. I would rather keep a central instance that each assembly links to rather than a dedicated instance with renamed classes to avoid the warnings.

The workaround I have is simply to ignore the warning using a #pragma. Is there a more elegant solution?

It is worth noting that another way to get such warnings is by simply setting a project in visual studio to reference itself: References -> Solution -> etc etc (how I figured this gem out is left as an exercise to the reader ...)

Visual Studio will happily comply, only to throw a wall of warnings of the type described by OP during build, which is to be expected (upon reflection) since every single class etc is getting defined twice.

The only time conflicts occur is when two dependent classes include the same class. There are two workarounds:

EDIT: There is also a solution: do what Mark suggests below, and mark duplicate classes internal.

I had a web application I converted from ASP.NET 3.5 to 4.5 when I moved to VS2015. I started seeing this as a warning, but the solution would still compile. There were no circular references, and cleaning the solution and deleting the bin and obj folders didn't help.

In .NET Core you can also disable the warning in project.json:

I had this error but not with 2 different classes!
Each new class where in conflict with itself, so obviously I had that CS0436 Error.

After some struggling found out that it was about Mirror Asset that I was using in my multiplayer Unity project. Mirror somehow was including every new class that I make (and inherit from NetworkBehavior).

in
Edit / Preferences / External tools / "Generate .csproj files for:"
I started testing different settings, and this worked for me:
(Not sure if the exact settings work for all, but not having the right files in project, leads to this error. like my case.) 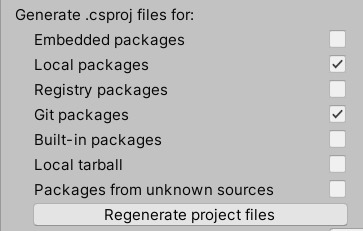 Click Regenerate project files and restart Unity and VSCode after applying these settings (or the setting that suits your project).

I've met such a case when removed some source files temporarily and restored them back later. It happens that IDE (Rider in my case) tries to restore the classes so when they were missing it just added the reference to the resulting exe. Evidently, when I restored the files, they look as duplicate. The reference IDE inserted looks like this and it's enough to just remove it to fix:

2197
How do I calculate someone's age based on a DateTime type birthday?
7416
What is the difference between String and string in C#?
1795
Calling the base constructor in C#
350
Warning: Found conflicts between different versions of the same dependent assembly
2269
What is the best way to give a C# auto-property an initial value?
2358
Should 'using' directives be inside or outside the namespace?
2850
What are the correct version numbers for C#?
1847
Proper use of the IDisposable interface
1821
Type Checking: typeof, GetType, or is?
3
Why does the C# compiler generate CS0436 warnings for internal classes?