How to solve COM Exception Class not registered (Exception from HRESULT: 0x80040154 (REGDB_E_CLASSNOTREG))?

Please suggest how could i solve it?

It looks like whichever program or process you're trying to initialize either isn't installed on your machine, has a damaged installation or needs to be registered.

Either install it, repair it (via Add/Remove Programs) or register it (via Regsvr32.exe).

You haven't provided enough information for us to help you any more than this.

You need to make sure all of your assemblies are compiling for the correct architecture. Try changing the architecture for x86 if reinstalling the COM component doesn't work.

My problem and the solution

I have a wcf service created in .net 4.5 framework which calls the 32 bit third party dll for process. Now i have build property set to target 'any' cpu and deployed it to the 64 bit machine.

Now i used ProcMon.exe to trace the com registry issue and identified that the process is looking for the registry entry at HKLM\CLSID and HKCR\CLSID where there is no entry.

Came to know that Microsoft will not register the 32 bit com components to the paths HKLM\CLSID, HKCR\CLSID in 64 bit machine rather it places the entry in HKLM\Wow6432Node\CLSID and HKCR\Wow6432Node\CLSID paths.

This can be achieved by configuring the wcf service project properties to target to 'X86' machine instead of 'Any'.

After deploying the 'X86' version to the 2008 R2 server got the issue "System.BadImageFormatException: Could not load file or assembly"

Solution to this badimageformatexception is setting the 'Enable32bitApplications' to 'True' in IIS Apppool properties for the right apppool.

Also note that the class context when initializing can create that exception. If you have an object which is coded as INPROC_SERVER but you try to CoCreateInstance as CLSCTX_LOCAL_SERVER, you will also get that error.

You need to ensure the object is registered and the CoCreateInstance is creating an instance with the correct class context.

If you are using 64-bit COM components in a web application on IIS, make sure the application pool is set to not allow 32 bit applications (Enable 32-Bit Applications: false in advanced settings)

By registering the class (specifically its CLSID) -- see e.g. here.

my platform is x64

the Dll library(sdk) and the redistributable package is x64

The way that I resolved this issue was to register the COM via regsvr32.

ensure that the COM you are invoking is registered.

My application was using xceedcry.dll and I was not registering it. Once I registered it, the application worked fine.

My solution was to change the "Enable 32-Bit Applications" to True in the advanced settings of the relative app pool in IIS. 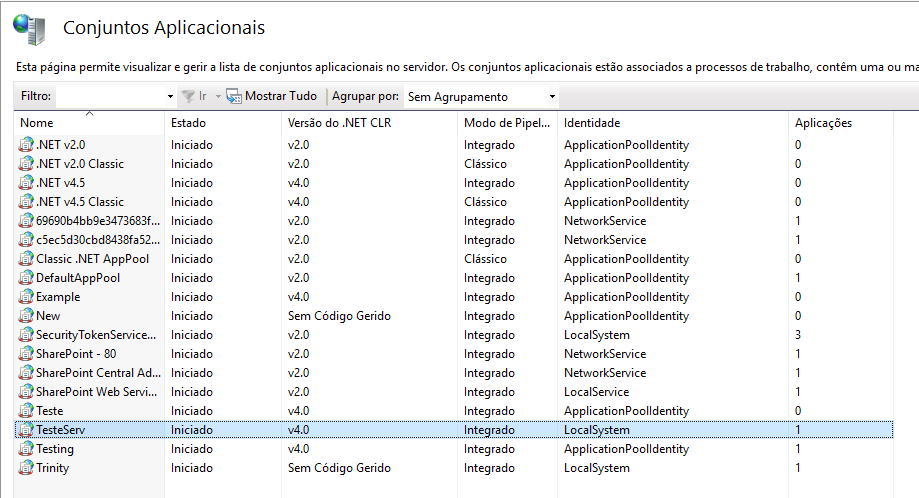 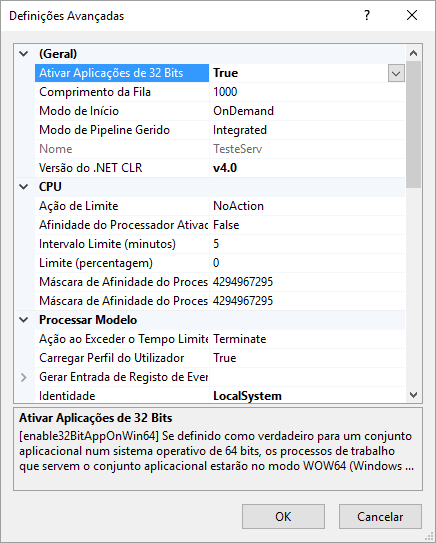 In my case the class was registered properly and built in ANY CPU / 64 bit mode.

But the Enable 32-bit Applications property of the IIS Application pool of the application which uses the class was set to True.

Class was not found because of the architecture mismatch between the application pool configuration and the actual registered class. 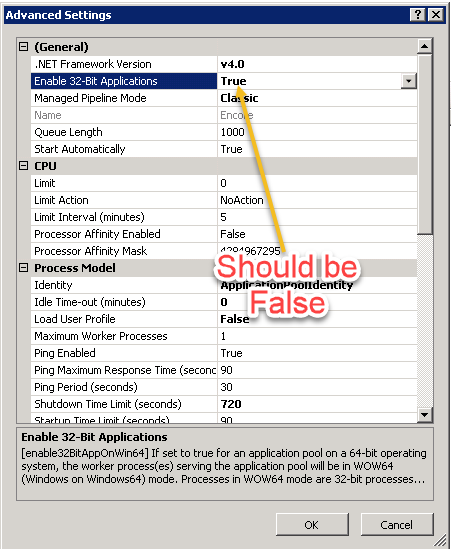 I had the same issue using MapWinGis. I found the solution, working on visual studio 2015 windows forms proyect, just right click on the proyect-> properties-> Build, set configuration to All configurations and in the conbobox "platform target" set it to x64.

For me, I had to create 64 bit build configuration.

I ran into this issue calling a .Net assembly from a C++ client via COM. It turns out that one of the assemblies the .Net assembly depended on could not be found. I wrestled for a while trying to figure out what was wrong with the 1st assembly, but it was actually one of the 1st assembly's dependencies. I received two different errors when calling CoCreateInstance() from the C++ client. The first was: REGDB_E_CLASSNOTREG Class not registered And the second try was: 0x80131040 : The located assembly's manifest definition does not match the assembly reference.

So check that your assembly's references are present. I discovered this by browsing the 1st assembly with dotPeek and noticing one of it's references was missing. Placing the correct version of the dependency in the folder resolved both errors.

I was compiling my application targeting any CPU and main problem turned out that adobe reader was installed older v10.x needs to upgrade v11.x, this is the way how I get to resolve this issue.

I ran into the same issue using a COM class, i.e. 'Class not registered exception' at runtime. For me I was able to resolve by going to the app.config file and change the 'startup' and 'supportedRuntime' elements to something like:

You can read more about the details here http://stackoverflow.com/questions/1604663/

I should note I am running Visual Studio 2017. Target cpu = x86 Embed Interop Type = true (in the properties window)

go to the directory of .Net framework and register their the respective dll with Regsvr32.exe white space dll path.

I have faced the same issue. After done some research i found fix for me and it may useful. The issue is not only related to re-installation as of my observation, it depends on access permissions also.

Move to Identity tab > You can select "Interactive user" or "This user" > Click Apply and OK. If you choose "This user", we have to give Administrative privileged user to that server 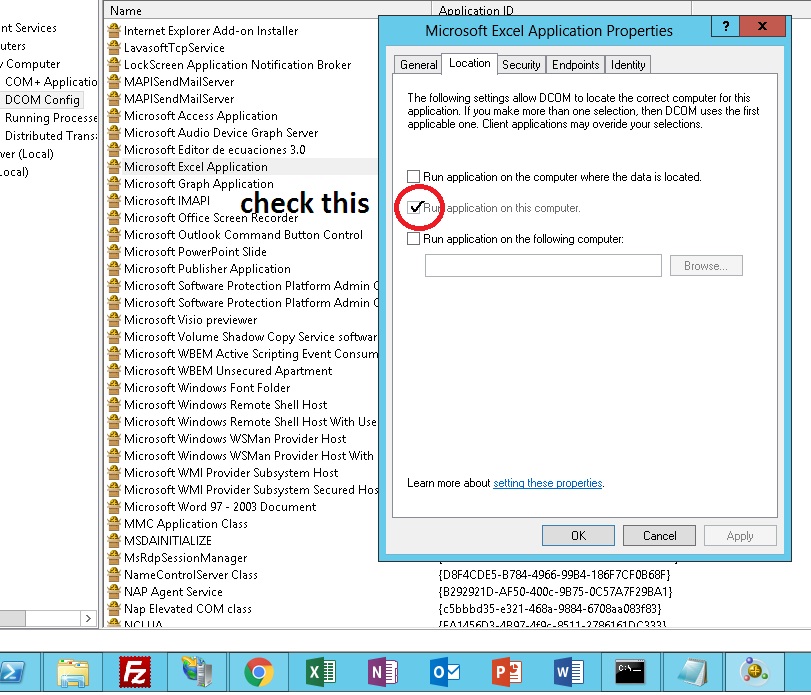 Not the answer you're looking for? Browse other questions tagged c# vb.net or ask your own question.

0
COM Library giving problems
0
(Exception from HRESULT: 0x80040154 (REGDB_E_CLASSNOTREG))
0
Unable to open Windows form ( .vb ) in visual studios 2010
0
createObject of vbs vs Activator.CreateInstance of C#
0
C# Exception on creating a instance of a object of a Erwind DLL
216
What does 'useLegacyV2RuntimeActivationPolicy' do in the .NET 4 config?
26
“Class not registered (Exception from HRESULT: 0x80040154 (REGDB_E_CLASSNOTREG))”
22
Class not registered Error
2
Embed Interop types issue
5
Unable to register a COM object for usage in a scheduled task
See more linked questions