I'm looking for help with improving an algorithm for placing blocks of odd shapes. My problem domain is odd, but the best analogy for my blocks is Tetris pieces, except that they can have more than four pieces. The blocks still are composed of only right angles, but they can be long and winding, they can branch, etc.

I'm trying to arrange multiple large arbitrarily shaped blocks in minimal space (I know, a bin-packing problem) but my current solution looks ugly. I'm basically placing one, then brute forcing the rest by trying to place them at the origin of my grid and then slowly pushing them in different directions until they don't collide anymore. It's not slow, but it doesn't make any attempt to fit pieces nicely so they don't waste overall space.

The only thing I can think of trying is ordering the blocks by size, placing the largest first, then fitting the smallest in at the end into any holes remaining. But there are certainly ways that can backfire.

Are there any heuristics or approximation algorithms that can help me here? 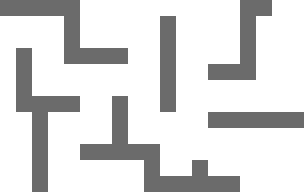 Also, perhaps my gravatar gives away that this is Mega Man related...

This (polyomino shape-packing) generally seems to be a nontrivial math problem, and I'll point you to the expertise of some others who have worked on it. This guy has a bunch of polyomino examples on his website where others can submit solutions. He also has solver software in Java:

There are also some algorithms written for this by Stephen Montgomery-Smith, which seem to be more comprehensive than the above (it solved some problems that weren't solvable with that) eventually made it into an xscreensaver (solves in real-time and cool to watch!). The following screenshot, from the screensaver, only shows shapes up to pentominoes, but it works on general shapes with general containers.

I am unsure if either of these software approximates the best fit of polyominoes allowing for holes. But it's definitely 'decidable' this way, in the sense that you could certainly insert extra 1x1 polyominoes into your solution and see if it can find a particular result that fits, then remove the 1x1 pieces to get the result. 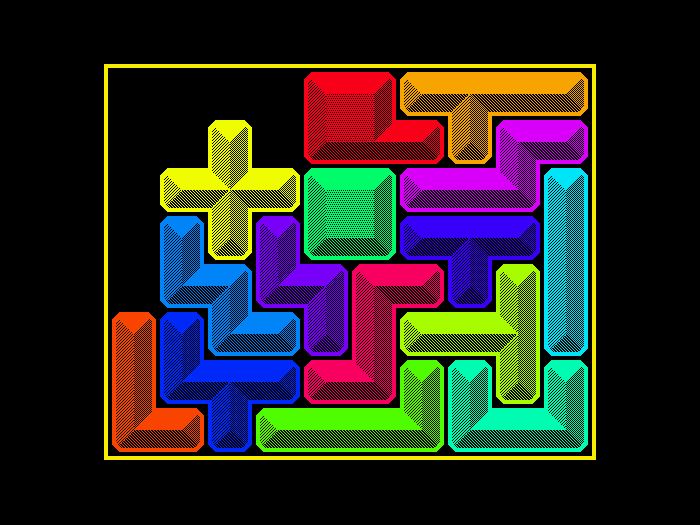 For your application, it might be more efficient to work backwards. All of these algorithms have complexity in the number of unit cells in each block. A good way to lay out your blocks would be to think of them as "subdivisions" in larger cells, so that a 3x3 square in your block corresponds to a 1x1 square in a rescaled version. Then, pad the blocks with empty space so they all consist of the larger blocks, run the algorithm, and strip away the extra space. Not only will this be much faster to execute, but it will also generate the space between blocks that you require.

Define a potential field, so every unit cell has gravitational attraction for every other cell. Plus there's a hard constraint on rigid relationship between neighbor cells. Optionally tack on a repulsive force, perhaps based on distance cubed. That way distant blocks will be attracted to one another until they encounter a region that prevents them from touching each other.

Having defined such a field, it is straightforward to let each block find its local gradient and slide smoothly down it.

You can also momentarily insert a repulsive field at some random location, to shake blocks out of a local optimum.

Not the answer you're looking for? Browse other questions tagged algorithm bin-packing or ask your own question.

628
Algorithm to return all combinations of k elements from n
1619
What is the best algorithm for overriding GetHashCode?
5
Algorithm needed for distributing rectangles evenly within another rectangle
43
How is 2D bin packing achieved programmatically?
1190
Ukkonen's suffix tree algorithm in plain English
1831
Image Processing: Algorithm Improvement for 'Coca-Cola Can' Recognition
1021
How can I find the time complexity of an algorithm?
2029
What is the optimal algorithm for the game 2048?
1
Difference Between Heuristic and Approximation Algorithm in Bin Packing