Update: The answer is definitely yes. The OP indicates in the comments that he was able to get VC 6 working by using this solution.

The way I did this was to install the following (in order of install):

I chose Windows 7 because it is the earliest version of Windows that will support VS 2012. I used a 32 Bit version because VS 2002 (VC7) would not install on an x64 machine.

As I mentioned, I could not get VC6. It was no where to be found on Microsoft's site. Bruce's comment under this question provides this helpful insight:

Visual C++ 6.0 isn't available (including via MSDN) from Microsoft because it included the Microsoft JVM. See this link for details. – BruceCran

After seeing the above, I figured that installing VS 2002 (VC 7) was the next best thing.

Obviously, this is where you would install VC 6, if you have a copy1.

1I should note, for anyone that is interested, that VC 6 is available on Ebay. If I were being paid in actual currency instead of points I would have gone the extra mile and gotten a copy of VC 6 to test.

The only reason for this is that it is a requirement for Daffodil. More on Daffodil below.

This is a requirement from the original question.

This is a set of configuration files that allows VS 2010 and VS 2012 to target older VC compilers.

Currently, these are the supported VC compiler versions:

I should note that Daffodil does not officially support VS 2012 as an IDE, but it does seem to work. From the Daffodil site:

Daffodil works fine in VS 2012 and later versions2 as long as VS 2010 is also installed.

2 There appears to be a debugging problem when using VS 2013 and VS 2015, as noted here:
Debugging information does not match, when using v60 platform toolset inside Visual Studio 2013

To test the above I created a new C++ Win 32 console project in Visual Studio 2012. I then removed all header and cpp files from the project - these have things that are VS 2012 specific, so were not needed. I then added a simple "hello world" file that I could use to test:

Using the project as is (targeting VS 2012), I tried to build it and it failed.

Next, I right-clicked the project and selected properties. I selected Configuration Properties on the left side of the dialog, and then under Platform Toolset, on the right, I selected v70. You will note that there is also an option for v60: 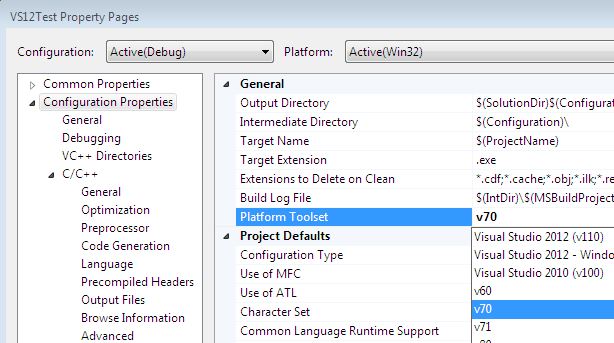 I then saved the change to the project and did a build. It built an exe successfully. Just to verify that VC 7 was being used, I launched Process Monitor during the compile:

As you can see cl.exe, the compiler, is being called from the VC 7 directory.

The original question involves compiling an existing VC 6 project. Just a couple of notes on this.

My guess is that for retargeting to work, that you will have to create a new empty project in VS 2012, and then add in all of the existing source files. The reason for doing this is that obviously the project format is different between the two versions of Visual Studio.

As I mentioned, I tested using VC 7 instead of 6. I suppose the last step is for the OP to try all of this using VC 6. Hopefully it all works.