After upgrade Android on Nexus to 4.2.2, Eclipse shows target unknown for device?

I just upgraded my phone to 4.2.2, but now i cannot use it in eclipse anymore.

I tried rebooting the device, reset my debug-settings but I cannot get it to work anymore.

I saw it is already a registered issue. There are some new security enhancements, so there should be a dialog (see here at bottom) but this dialog doesn't appear. I don't have several accounts on the phone, which is pointed out in the issue..

You need three things in order to make sure this update goes smoothly:

Connect your Device to your computer and execute adb devices (make sure USB debugging is enabled). You should see something like this:

Right about now, there should be a dialog on your device that looks something like: 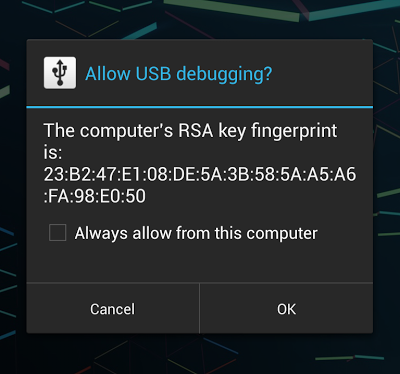 Check the Always allow from this computer box if you want and click OK.

Some other things to check:

For me it was solved by changing Nexus 7 tablet to "Camera(PTP)" mode. Check out this blog post on how to do it. After USB connection of Nexus 7 and confirming digest on Nexus 7, also connecting through TCP/IP with ADB worked.

Wierdly, unchecking and rechecking the "Allow USB Debugging" option popped me the window and selecting "ok" solved my problem.

If none of the solutions worked for you then Reset ADB. Go to Devices ---Click the right most down arrow----Select Reset ADB from the list.

I had tried everything suggested here and suggested in every log/blog that I could find in google, but still no go. The USB cable is known to be good. ADB is version 1.0.31 (as shown with , USB Debugging is enabled in the Nexus 7 tablet, the SDK was updated to the very latest tools as available on 1-mar-2013 for 4.2.2/API 17. I had tried both Media and Camera modes for USB, rebooted windows, rebooted device over and over again, re-installed latest google USB driver, etc. etc. but ADB Devices still showed nothing.

I hard reset the Nexus 7 tablet thinking that maybe the screen to allow usb debugging had appeared but got hit with cancel. But that didn't work either.

What finally worked was:

That didn't fix anything though.

So then I switched USB from MEDIA device to Camera device - THEN it wanted to install driver software, so I let it do that. Afterwards, I noticed that the driver for the Nexus was back with the 2006 version, BUT then ADB DEVICES FINALLY SHOWED OFFLINE!!!! HALLELUJAH AND the Nexus was displaying the Dialog to allow USB debugging, and it now all works.

What I am not sure of is what step actually solved the problem. I don't think it was necessary to hard reset the Tablet, but the fiddling with the device driver wasn't a very convincing solution either - I don't think the driver was corrupt - but maybe it had to be changed to get the right driver associated with the tablet when connected as a Camera Device. In any event, it is necessary to connect the tablet as a Camera device for ADB to work...

Restarting device or enabling USB debugging did not solve my problem. However I changed USB PC Connection to "Camera(PTP)" mode and adb devices showed the device id of the phone.

Go to Device Manager and uninstall your device and remove from USB HAve you CMD opend and make sure you are at least in ADB Help. Connect device to USB and continue with steps provided by Raghav Sood - few answers ahead of me.

Worked for me just fine

I tried with this custom build and it works for me. Now I can see my logcat in Eclipse again.

Download the zip file then in Eclipse menu Help > Install New Software... > Add > Archive... Just pick the downloaded zip and do the rest of the install process.

Not the answer you're looking for? Browse other questions tagged android eclipse or ask your own question.