Why does comparing strings using either '==' or 'is' sometimes produce a different result?

If I open my Python interpreter and do the same is comparison, it succeeds:

is is identity testing, == is equality testing. what happens in your code would be emulated in the interpreter like this:

so, no wonder they're not the same, right?

Other answers here are correct: is is used for identity comparison, while == is used for equality comparison. Since what you care about is equality (the two strings should contain the same characters), in this case the is operator is simply wrong and you should be using == instead.

The reason is works interactively is that (most) string literals are interned by default. From Wikipedia:

Interned strings speed up string comparisons, which are sometimes a performance bottleneck in applications (such as compilers and dynamic programming language runtimes) that rely heavily on hash tables with string keys. Without interning, checking that two different strings are equal involves examining every character of both strings. This is slow for several reasons: it is inherently O(n) in the length of the strings; it typically requires reads from several regions of memory, which take time; and the reads fills up the processor cache, meaning there is less cache available for other needs. With interned strings, a simple object identity test suffices after the original intern operation; this is typically implemented as a pointer equality test, normally just a single machine instruction with no memory reference at all.

So, when you have two string literals (words that are literally typed into your program source code, surrounded by quotation marks) in your program that have the same value, the Python compiler will automatically intern the strings, making them both stored at the same memory location. (Note that this doesn't always happen, and the rules for when this happens are quite convoluted, so please don't rely on this behavior in production code!)

Since in your interactive session both strings are actually stored in the same memory location, they have the same identity, so the is operator works as expected. But if you construct a string by some other method (even if that string contains exactly the same characters), then the string may be equal, but it is not the same string -- that is, it has a different identity, because it is stored in a different place in memory.

The is keyword is a test for object identity while == is a value comparison.

One last thing to note, you may use the sys.intern function to ensure that you're getting a reference to the same string:

As pointed out above, you should not be using is to determine equality of strings. But this may be helpful to know if you have some kind of weird requirement to use is.

Note that the intern function used to be a builtin on Python 2 but was moved to the sys module in Python 3.

is is identity testing and == is equality testing. This means is is a way to check whether two things are the same things, or just equivalent.

Say you've got a simple person object. If it is named 'Jack' and is '23' years old, it's equivalent to another 23-year-old Jack, but it's not the same person.

They're the same age, but they're not the same instance of person. A string might be equivalent to another, but it's not the same object.

This is a side note, but in idiomatic Python, you will often see things like:

This is safe, because there is guaranteed to be one instance of the Null Object (i.e., None).

If you're not sure what you're doing, use the '=='. If you have a little more knowledge about it you can use 'is' for known objects like 'None'.

Otherwise you'll end up wondering why things doesn't work and why this happens:

I'm not even sure if some things are guaranteed to stay the same between different python versions/implementations.

From my limited experience with python, is is used to compare two objects to see if they are the same object as opposed to two different objects with the same value. == is used to determine if the values are identical.

Here is a good example:

s1 is a unicode string, and s2 is a normal string. They are not the same type, but are the same value.

I think it has to do with the fact that, when the 'is' comparison evaluates to false, two distinct objects are used. If it evaluates to true, that means internally it's using the same exact object and not creating a new one, possibly because you created them within a fraction of 2 or so seconds and because there isn't a large time gap in between it's optimized and uses the same object.

This is why you should be using the equality operator ==, not is, to compare the value of a string object.

The == operator tests value equivalence. The is operator tests object identity, and Python tests whether the two are really the same object (i.e., live at the same address in memory).

In this example, Python only created one string object, and both a and b refers to it. The reason is that Python internally caches and reuses some strings as an optimization. There really is just a string 'banana' in memory, shared by a and b. To trigger the normal behavior, you need to use longer strings:

When you create two lists, you get two objects:

If a refers to an object and you assign b = a, then both variables refer to the same object:

I believe that this is known as "interned" strings. Python does this, so does Java, and so do C and C++ when compiling in optimized modes.

If you use two identical strings, instead of wasting memory by creating two string objects, all interned strings with the same contents point to the same memory.

This results in the Python "is" operator returning True because two strings with the same contents are pointing at the same string object. This will also happen in Java and in C.

This is only useful for memory savings though. You cannot rely on it to test for string equality, because the various interpreters and compilers and JIT engines cannot always do it.

From the language reference:

Types affect almost all aspects of object behavior. Even the importance of object identity is affected in some sense: for immutable types, operations that compute new values may actually return a reference to any existing object with the same type and value, while for mutable objects this is not allowed. E.g., after a = 1; b = 1, a and b may or may not refer to the same object with the value one, depending on the implementation, but after c = []; d = [], c and d are guaranteed to refer to two different, unique, newly created empty lists. (Note that c = d = [] assigns the same object to both c and d.)

The same applies for int and tuple which are also immutable types.

is will compare the memory location. It is used for object-level comparison.

== will compare the variables in the program. It is used for checking at a value level.

is checks for address level equivalence

is is identity testing and == is equality testing (see the Python documentation).

In most cases, if a is b, then a == b. But there are exceptions, for example:

So, you can only use is for identity tests, never equality tests.

The basic concept we have to be clear while approaching this question is to understand the difference between is and ==.

"is" is will compare the memory location. if id(a)==id(b), then a is b returns true else it returns false.

so, we can say that is is used for comparing memory locations. Whereas,

== is used for equality testing which means that it just compares only the resultant values. The below shown code may acts as an example to the above given theory. 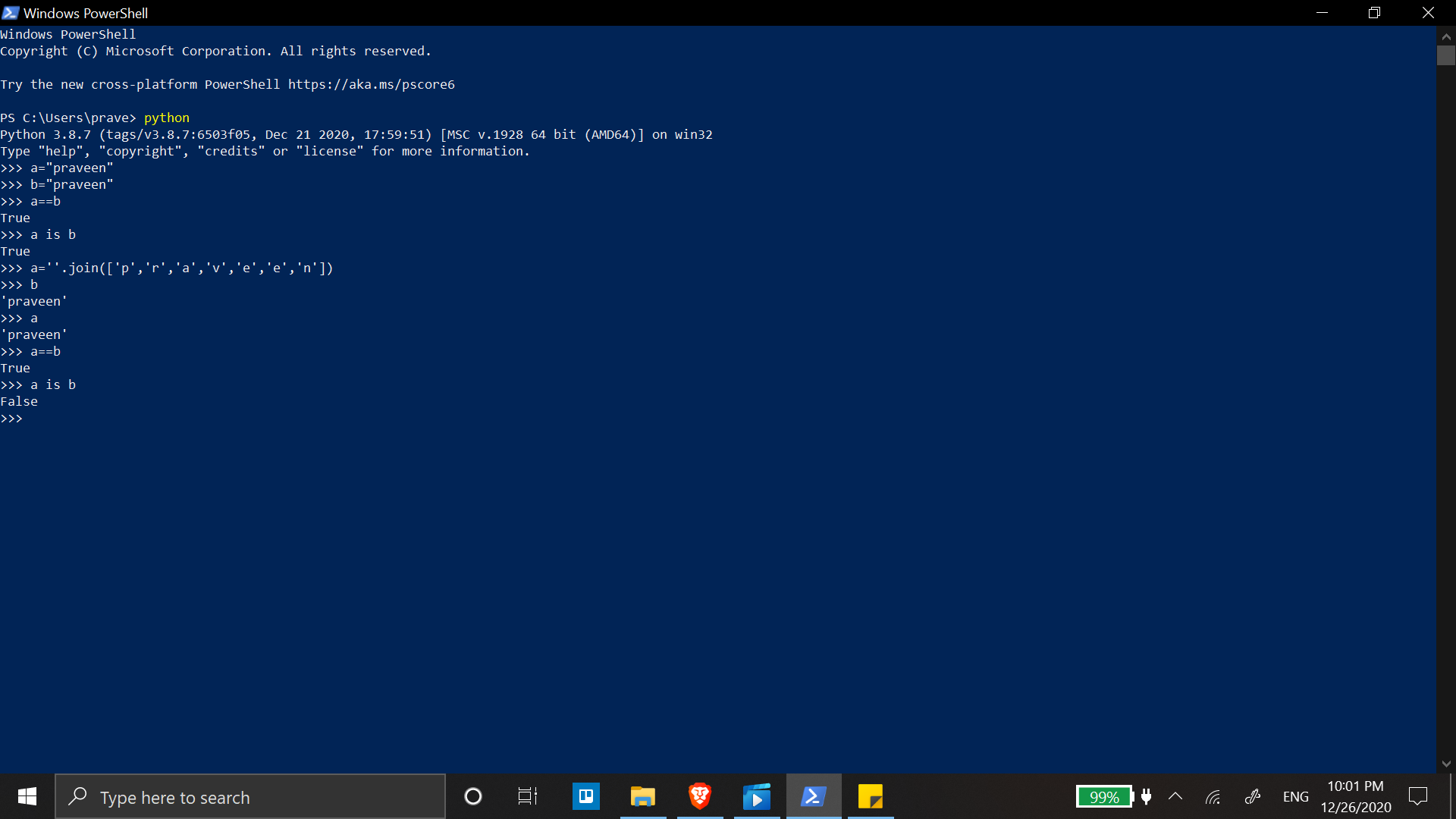 In the case of string literals(strings without getting assigned to variables), the memory address will be same as shown in the picture. so, id(a)==id(b). remaining this is self-explanatory.

597
String comparison in Python: is vs. ==
19
What is the correct way to check for False?
13
Pylint complains about comparing a string to a literal with 'is'
4
is there a time when the `is` operator can return false with two similar strings in Python?
5
What is the difference between "is" and "==" in python?
4
Why does string equality not working in this Python code as expected?
6
Difference between `is` and `==`?
4
In python, why 'is' is preferred over '==' for checking if object in None
5
Python strings references
6
Different storage position of equal strings with special characters
See more linked questions

2281
Calling a function of a module by using its name (a string)
1717
Replacements for switch statement in Python?
3299
Case insensitive 'Contains(string)'
3468
Convert bytes to a string
3416
How do I sort a dictionary by value?
2623
Extract filename and extension in Bash
3216
"Least Astonishment" and the Mutable Default Argument
2111
Why is reading lines from stdin much slower in C++ than Python?
1874
Why does this code using random strings print "hello world"?