Python pip install module is not found. How to link python to pip location?

I'm a newbie and I needed the pySerial and feedparser module for my projects. I'm running Mountain lion.

I followed the following tutorial so that I could upgrade to python 2.7.3 and then use the above mentioned modules.

I followed this tutorial till I installed pip. Instead of installing Virtualenv. I used the following commands to install pySerial and feedparser

I assumed that this was already present and checked it. Python seems to be importing this just fine. My python version has been upgraded to 2.7.3 btw since I installed it using homebrew as mentioned in the tutorial.

Then I tried installing feedparser

Notice how its in the site-packages directory in the usr/local/lib.

All of my pip installs are being installed in that directory but python does not seem to be picking them up when i try importing them.

How do I set the path so that python also looks there as well as core directory?

Your help will be greatly appreciated.

I tried looking for answers here: Pip installs but module is not found Why I can't import beautifulsoup on mac using python 2.7 after installing it by using pip and/or easy_install?

but niether of them are in the same situation as I am. I don't understand why this is happening as i edited my bash_profile with the following

I figured all pip installs would be correctly linked?

As a quick workaround, and assuming that you are on a bash-like terminal (Linux/OSX), you can try to export the PYTHONPATH environment variable:

Here is something I learnt after a long time of having issues with pip when I had several versions of Python installed (valid especially for OS X users which are probably using brew to install python blends.)

I assume that most python developers do have at the beginning of their scripts:

To be sure you install the package using the correct pip instance for your python interpreter you need to run something like:

I also had this problem. I noticed that all of the subdirectories and files under /usr/local/lib/python2.7/dist-packages/ had no read or write permission for group and other, and they were owned by root. This means that only the root user could access them, and so any user that tried to run a Python script that used any of these modules got an import error:

And that resolved the problem for me:

I installed these packages with pip (run as root with sudo). I am not sure why it installed them without granting read/search permissions. This seems like a bug in pip to me, or possibly in the package configuration, but I am not very familiar with Python and its module packaging, so I don't know for sure. FWIW, all packages under dist-packages had this issue. Anyhow, hope that helps.

No other solutions were working for me, so I tried:

And that resolved it for me. Your mileage may vary.

For the sake of anyone also using visual studio from a windows environment:

However debugging in visual studio was getting "module not found". Oddly, i was successfully running import [moduleName] when i ran the interpreter in powershell.

visual studio was using the wrong interpreter at: C:\Users\[username]\AppData\Local\Programs\Python\Python37\

What I REALLY wanted was visual studio to use the virtualenv that i setup for my project. To do this, right click Python Environments in "solution explorer", select Add Virtual Environment..., and then select the folder where you created your virtual environment. 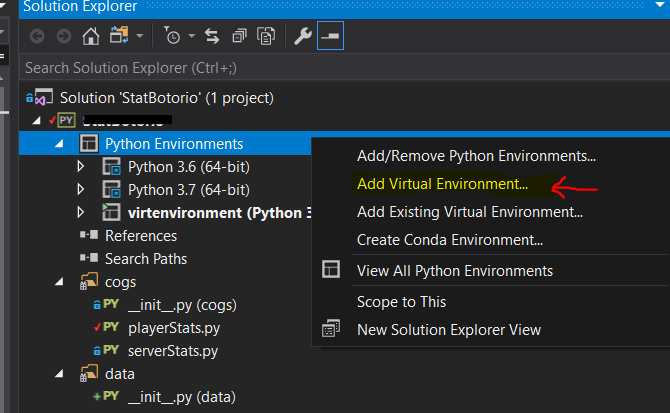 Then, under project settings, under the General tab, select your virtual environment in the dropdown.

Now visual studio should be using the same interpreter and everything should play nice!

If your python and pip binaries are from different versions, modules installed using pip will not be available to python.

The -i flag promts you to overwrite if the target exists.

That should do the trick.

Below steps helped me fix this.

I had an identical issue which I traced back to moving the directory containing my virtual environment. I only noticed it much later since I didn't use libraries that lived in the environment itself.

It seems like upon construction, the virtual environment sets a VIRTUAL_ENV variable that contains the path to itself, which is apparently appended to PATH when the environment is activated; this is not updated when moved manually, meaning changing the environment's location breaks links to libraries it contains.

I simply fixed things by deleting and re-creating my environment.

I was using administrator privileges on Ubuntu and I was encountering this issue. my command was sudo python3 <program.py>

It turns out that packages installed for root privileges are stored in a different place than regular user privileges.

I fixed it by writing sudo pip install <package name>

Then I could run the program. Good luck!

for my case, I go to the venv settings in vs code
Visit this link and scroll down to Update Venv Path Settings in VSCode:
https://techinscribed.com/python-virtual-environment-in-vscode/

For me the problem was that I had weird configuration settings in file pydistutils.cfg

This avoids pip installing the package to a version that you and your IDE don't use.

how did you install easy_install/pip? make sure that you installed it for the upgraded version of python. what could have happened here is that the old (default) python install might be linked to your pip install. you might wanna try running the default version and importing the newly installed modules.

Make sure to check the python version you are working on if it is 2 then only pip install works If it is 3. something then make sure to use pip3 install

3
I cannot import sqlalchemy without getting ImportError: No module named sqlalchemy
0
ModuleNotFoundError: No module named 'bulstem'
0
Unable to install new packages for Python 2.7 Mac Terminal
28
Modules are installed using pip on OSX but not found when importing
3
Cannot import praw
0
no module pip found Spyder
0
Python modules installed, but won't import
1
Messed up pip environment and unable to python import modules
0
why the python module did not found but install tell me already required
0
No module named dbus - I already have that - Raspbian
See more linked questions