I don't understand how to use $scope.$watch and $scope.$apply. The official documentation isn't helpful.

What I don't understand specifically:

I tried this tutorial, but it takes the understanding of $watch and $apply for granted.

What do $apply and $watch do, and how do I use them appropriately?

You need to be aware about how AngularJS works in order to understand it.

First and foremost, AngularJS defines a concept of a so-called digest cycle. This cycle can be considered as a loop, during which AngularJS checks if there are any changes to all the variables watched by all the $scopes. So if you have $scope.myVar defined in your controller and this variable was marked for being watched, then you are implicitly telling AngularJS to monitor the changes on myVar in each iteration of the loop.

A natural follow-up question would be: Is everything attached to $scope being watched? Fortunately, no. If you would watch for changes to every object in your $scope, then quickly a digest loop would take ages to evaluate and you would quickly run into performance issues. That is why the AngularJS team gave us two ways of declaring some $scope variable as being watched (read below).

There are two ways of declaring a $scope variable as being watched.

Ad 1) This is the most common scenario and I'm sure you've seen it before, but you didn't know that this has created a watch in the background. Yes, it had! Using AngularJS directives (such as ng-repeat) can also create implicit watches.

Ad 2) This is how you create your own watches. $watch service helps you to run some code when some value attached to the $scope has changed. It is rarely used, but sometimes is helpful. For instance, if you want to run some code each time 'myVar' changes, you could do the following:

$apply enables to integrate changes with the digest cycle

You can think of the $apply function as of an integration mechanism. You see, each time you change some watched variable attached to the $scope object directly, AngularJS will know that the change has happened. This is because AngularJS already knew to monitor those changes. So if it happens in code managed by the framework, the digest cycle will carry on.

However, sometimes you want to change some value outside of the AngularJS world and see the changes propagate normally. Consider this - you have a $scope.myVar value which will be modified within a jQuery's $.ajax() handler. This will happen at some point in future. AngularJS can't wait for this to happen, since it hasn't been instructed to wait on jQuery.

To tackle this, $apply has been introduced. It lets you start the digestion cycle explicitly. However, you should only use this to migrate some data to AngularJS (integration with other frameworks), but never use this method combined with regular AngularJS code, as AngularJS will throw an error then.

How is all of this related to the DOM?

Well, you should really follow the tutorial again, now that you know all this. The digest cycle will make sure that the UI and the JavaScript code stay synchronised, by evaluating every watcher attached to all $scopes as long as nothing changes. If no more changes happen in the digest loop, then it's considered to be finished.

You can attach objects to the $scope object either explicitly in the Controller, or by declaring them in {{expression}} form directly in the view.

In AngularJS, we update our models, and our views/templates update the DOM "automatically" (via built-in or custom directives).

$apply and $watch, both being Scope methods, are not related to the DOM.

The Concepts page (section "Runtime") has a pretty good explanation of the $digest loop, $apply, the $evalAsync queue and the $watch list. Here's the picture that accompanies the text: 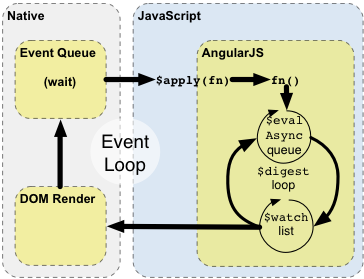 Whatever code has access to a scope – normally controllers and directives (their link functions and/or their controllers) – can set up a "watchExpression" that AngularJS will evaluate against that scope. This evaluation happens whenever AngularJS enters its $digest loop (in particular, the "$watch list" loop). You can watch individual scope properties, you can define a function to watch two properties together, you can watch the length of an array, etc.

When things happen "inside AngularJS" – e.g., you type into a textbox that has AngularJS two-way databinding enabled (i.e., uses ng-model), an $http callback fires, etc. – $apply has already been called, so we're inside the "AngularJS" rectangle in the figure above. All watchExpressions will be evaluated (possibly more than once – until no further changes are detected).

When things happen "outside AngularJS" – e.g., you used bind() in a directive and then that event fires, resulting in your callback being called, or some jQuery registered callback fires – we're still in the "Native" rectangle. If the callback code modifies anything that any $watch is watching, call $apply to get into the AngularJS rectangle, causing the $digest loop to run, and hence AngularJS will notice the change and do its magic.

Every time you bind something in the UI you insert a $watch in a $watch list.

When our template is loaded, AKA in the linking phase, the compiler will look for every directive and creates all the $watches that are needed.

AngularJS provides $watch, $watchcollection and $watch(true). Below is a neat diagram explaining all the three taken from watchers in depth. 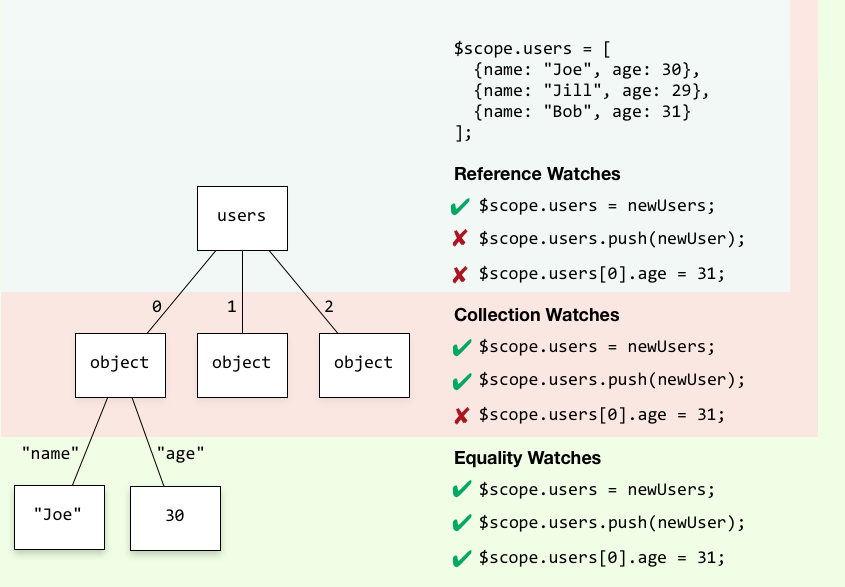 When the browser receives an event that can be managed by the AngularJS context the $digest loop will be fired. This loop is made from two smaller loops. One processes the $evalAsync queue, and the other one processes the $watch list. The $digest will loop through the list of $watch that we have

Here we have only one $watch because ng-click doesn’t create any watches.

We press the button.

If you call $apply when an event is fired, it will go through the angular-context, but if you don’t call it, it will run outside it. It is as easy as that. $apply will call the $digest() loop internally and it will iterate over all the watches to ensure the DOM is updated with the newly updated value.

Following are a couple of slides used in those videos to explain the concepts (just in case, if the above links are removed/not working). 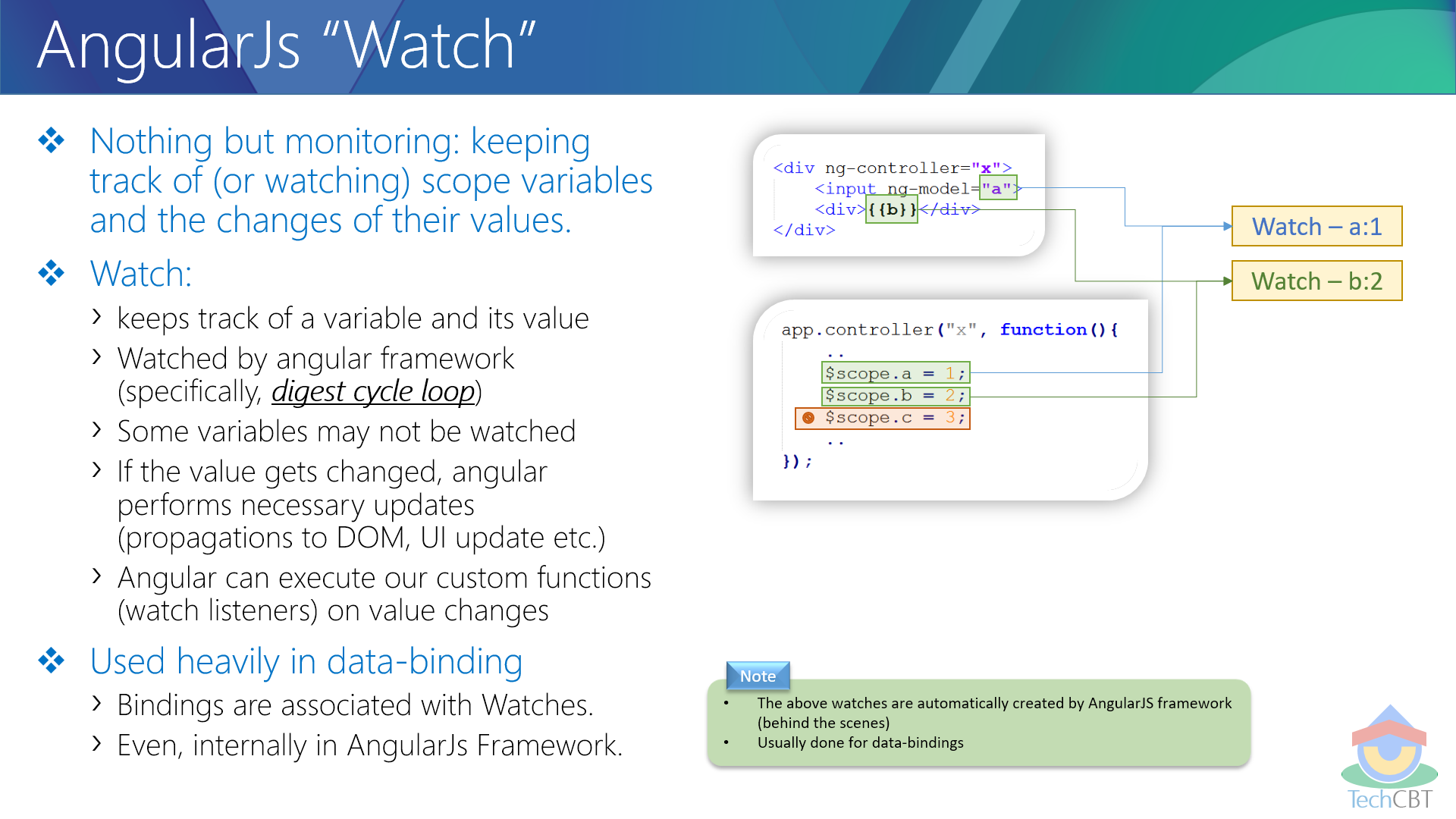 In the above image, "$scope.c" is not being watched as it is not used in any of the data bindings (in markup). The other two ($scope.a and $scope.b) will be watched. 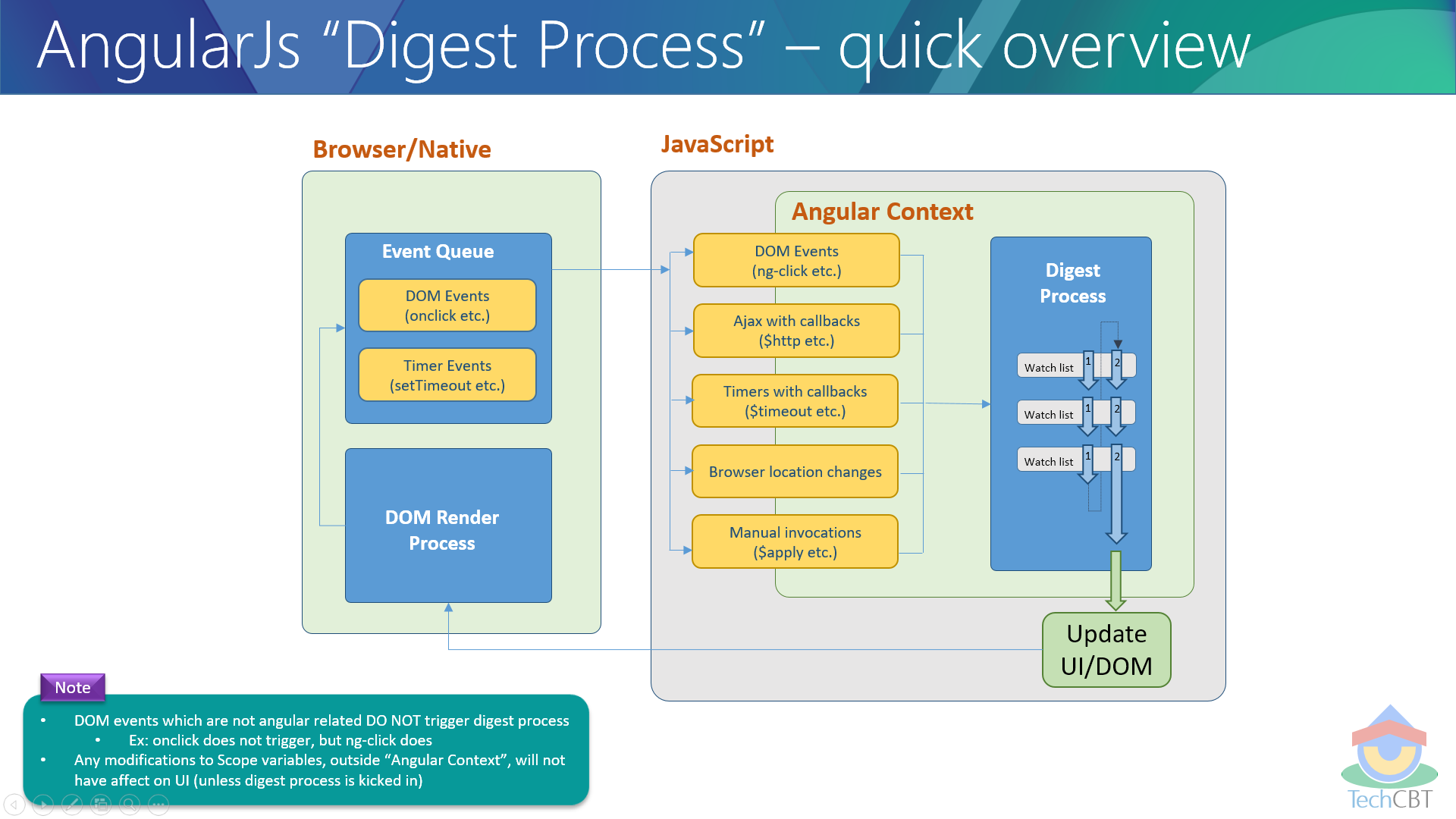 From the above image: Based on the respective browser event, AngularJS captures the event, performs digest cycle (goes through all the watches for changes), execute watch functions and update the DOM. If not browser events, the digest cycle can be manually triggered using $apply or $digest.

More about $apply and $digest: 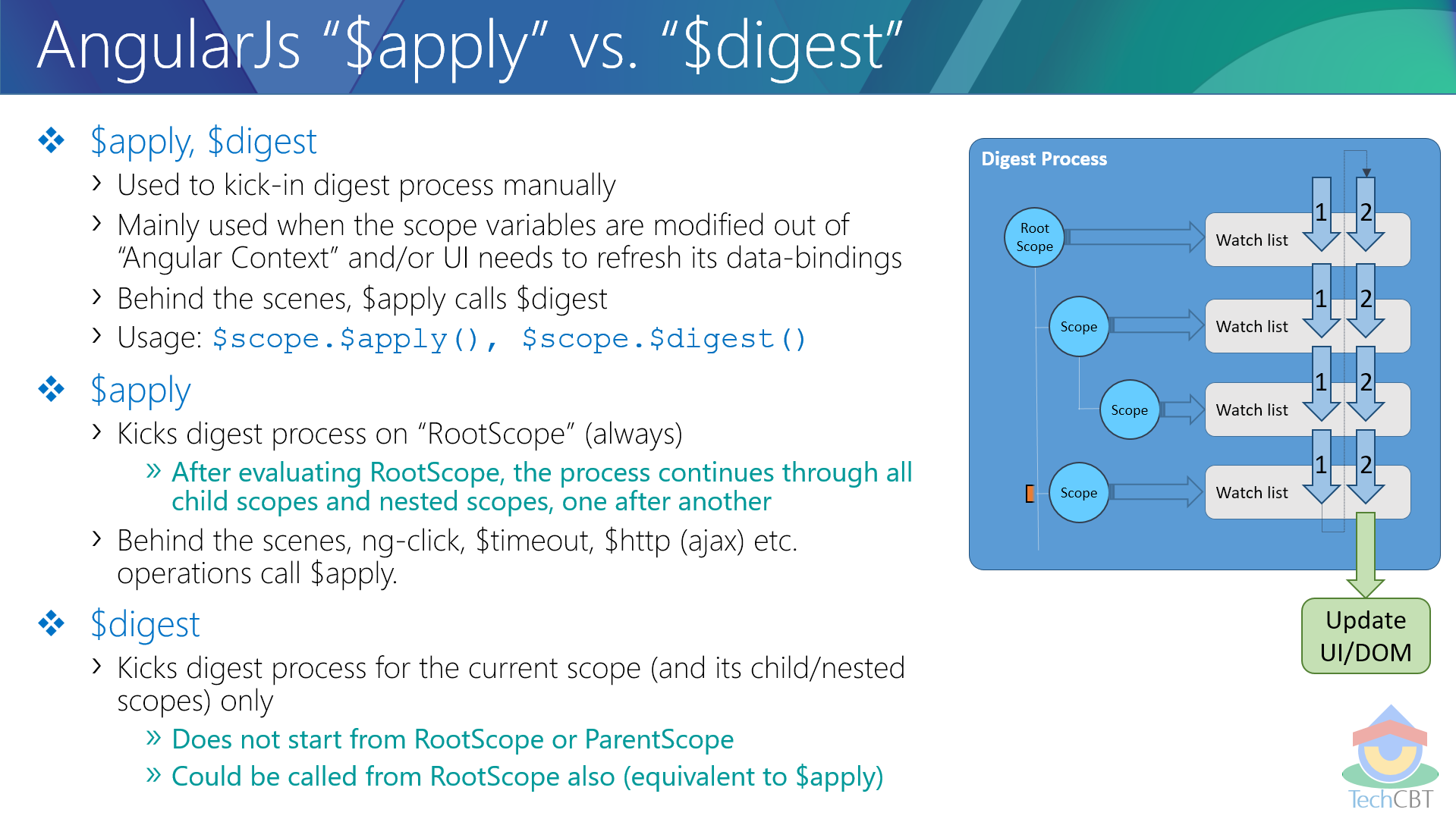 There are $watchGroup and $watchCollection as well. Specifically, $watchGroup is really helpful if you want to call a function to update an object which has multiple properties in a view that is not dom object, for e.g. another view in canvas, WebGL or server request.

Just finish reading ALL the above, boring and sleepy (sorry but is true). Very technical, in-depth, detailed, and dry. Why am I writing? Because AngularJS is massive, lots of inter-connected concepts can turn anyone going nuts. I often asked myself, am I not smart enough to understand them? No! It's because so few can explain the tech in a for-dummie language w/o all the terminologies! Okay, let me try:

1) They are all event-driven things. (I hear the laugh, but read on)

If you don't know what event-driven is Then think you place a button on the page, hook it up w/ a function using "on-click", waiting for users to click on it to trigger the actions you plant inside the function. Or think of "trigger" of SQL Server / Oracle.

What's special about is it takes 2 functions as parameters, first one gives the value from the event, second one takes the value into consideration...

3) $digest is the boss who checks around tirelessly, bla-bla-bla but a good boss.

4) $apply gives you the way when you want to do it manually, like a fail-proof (in case on-click doesn't kick in, you force it to run.)

Now, let's make it visual. Picture this to make it even more easy to grab the idea:

are supposed to take orders from customers, this is

- MANAGER running around to make sure all waiters are awake, responsive to any sign of changes from customers. This is $digest()

- OWNER has the ultimate power to drive everyone upon request, this is $apply()

1
When should $scope.apply() be used in angular?
0
Access parent scope variables in Angular directive
456
Watch multiple $scope attributes
60
How does AngularJS know when variables change? How does AngularJS dirty checking work?
12
How to populate select filters on ng-table from async call
3
console.log for $scope in angular js
4
Why AngularJS ng-bind does not update the view
10
Angular Watch and ng-click sequence of events
6
confused about the need for $scope.$apply
4
How to detect when content has loaded?
See more linked questions

2033
How does data binding work in AngularJS?
1052
'this' vs $scope in AngularJS controllers
864
AngularJS : Prevent error $digest already in progress when calling $scope.$apply()
1305
How do I access the $scope variable in browser's console using AngularJS?
1052
What are the nuances of scope prototypal / prototypical inheritance in AngularJS?
1105
What is the difference between '@' and '=' in directive scope in AngularJS?
905
Working with $scope.$emit and $scope.$on
265
When writing a directive in AngularJS, how do I decide if I need no new scope, a new child scope, or a new isolated scope?
393
AngularJS access parent scope from child controller
93
Why is using if(!$scope.$$phase) $scope.$apply() an anti-pattern?