Apologies for the ambiguous title; however I am attempting to port our PhoneGap application which is working fine on Android and iOS onto Windows Phone 8 (written in jQuery Mobile/JavaScript, HTML and CSS3).

The most part of it worked (albeit I had to change a couple of bits but that was expected). One major problem I am having at the moment is getting the scrolling list functionality of our application working, and the signature capture (both I believe are related). I'm not too sure where the problem lies but when I scroll/sign, the entire page moves with my finger, and the individual elements do not pick up the touch-events. I am using iScroll, jQuery 1.7.2 and jQM 1.1.0; however, continue reading because the scrolling functionality was working (the signing feature has always been a problem)!

Before scrolling stopped working, I was having an issue with the gap between the footer bar and the bottom of the page: 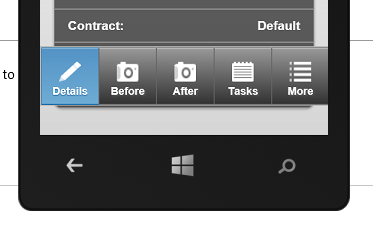 One thing I was advised to do was to add the following bit of CSS; and it resolved the 'gap' issue: 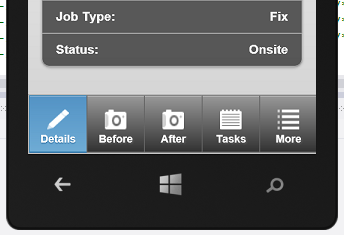 However, it then caused the scrolling features to become unresponsive. The entire page moves up/down but not the list element which is the opposite of what I want! I've tried adding the following but without luck:

I added this to my div element which contains the page. It stopped the page moving up and down! However the list remained unresponsive. However, if I remove both these CSS classes, then the scroll functionality works again, but that reintroduces the gap issue. The viewport CSS class is definitely the correct route I believe - but I cannot, for the life of me, get it to work the way I'd like it to.

If somebody could help, it would be greatly appreciated.

First of all, @-ms-viewport doesn't support the zooming, so remove the zoom properties because they will generate parsing errors. The supported properties are listed here

Second, try to add this rules to your CSS and use iScroll in your central container as you said you were doing

you can use this in your css and it will fix your footer.

2542
Make a div fill the height of the remaining screen space
1124
How to force browsers to reload cached CSS and JS files?
189
How to scroll to top of page with JavaScript/jQuery?
2681
How do I refresh a page using JavaScript?
313
Make div stay at bottom of page's content all the time even when there are scrollbars
561
Prevent body scrolling but allow overlay scrolling
110
iOS Safari – How to disable overscroll but allow scrollable divs to scroll normally?
273
jQuery Mobile: document ready vs. page events
517
CSS3 100vh not constant in mobile browser
372
How does the "position: sticky;" property work?