Is there any graphical “sudo” for Mac OS X?

I'm designing a little software in Java. I don't know the term/definition to what I'm doing, but I'm prompting commands from Java to the terminal. Something like this:

I've done this before in Linux, and I used gksudo for commands that required the root password.

Is there any gksudo in OS X? Any graphical popup asking for root password?

You can more ore less manage to write your own with an AppleScript shell script:

cocoasudo looks aesthetically more pleasing, but this is already deployed. 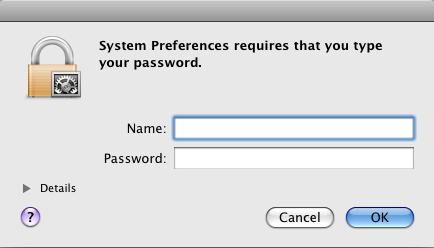 For Mac OS X Cocoa-based apps, there is analagous ability to sudo provided via the Authorization Services API. Use of the API allows you to prompt the user for their username and password requesting the ability to escalate privileges.

For that case, I’ve written a small utility that I’ve dubbed cocoasudo. Use cocoasudo in much the same way you’d use sudo. However, instead of users being prompted for their password in a Terminal window, they’ll get a dialog prompt via the Authorization Services API.

I found the cocoasudo doesn't work if you are running a shell script that calls other commands. You would have to use cocoasudo in all sub-commands also which would pop up a prompt for each call.

The osascript solution seems to work better, but I needed to tweak it to work with commands involving paths containing spaces.

make the follows, in this example I go create a folder /var/lock and set your permissions to 777:

on linux maybe you can make this with gksudo but I not test it, after I go testing and post here the results.

gksudo is the GTK+ version of sudo.

You can use this clone for it especially for OS X.

Following ZJR's answer, I've made this into automator, so you can use it as a Service or whatever:

Or, maybe you just think his answer is outdated and still want an AppleScript, just write this single line in Script Editor:

Which you can then make into an app and use it as a Service or whatever.

One should use the native OS X authorization services instead of looking at sudo and/or a graphical interface to it.

There seems to be a lot of wrong information in these answers. To save other people some time, I post my own findings:

First of all, like the poster of the question, I also have the situation that I need to elevate permissions from within a Java application.

I have confirmed via extensive logging into separate files that the scripts indeed do what I intended. And they work fine when launched manually (with normal user privileges of course) from the command line.

When launched from the Java app, I do get the cocoasudo prompt, but nothing happens. Not even the first logging output from the second script appears.

When I change the first script to use osascript, again with confirmation that everything is correct as far as the script goes, I don't even get a prompt when it runs from within Java.

This is all on OS X Mountain Lion. As if Apple build in some safe guards that prevent scripts being executed with root privileges from within Java.

Since cocoasudo itself actually runs, I am inclined to think the solution is to code something similar to cocoasudo, but performing all the rest of the required actions using Cocoa API calls. This can then be code-signed as well.

If you are using a terminal, then just use "sudo" instead, which will prompt for the user's password in the terminal itself (as opposed to gksudo which I believe uses a graphical popup). Sudo works on both Linux and OS X.

Not the answer you're looking for? Browse other questions tagged macos shell sudo privileges gksudo or ask your own question.

18
run applescript on 2x-click
10
How to run sudo command for OS X in java
13
Getting sudo to ask for password via the GUI
9
run jar with root privileges on mac os x by one click
3
Become root after app starts
0
Starting process from Adobe AIR requires credentials?

953
How do I use sudo to redirect output to a location I don't have permission to write to?
627
sudo echo “something” >> /etc/privilegedFile doesn't work
1516
How does the vim “write with sudo” trick work?
2117
Find (and kill) process locking port 3000 on Mac
1551
Who is listening on a given TCP port on Mac OS X?
1056
How can I start PostgreSQL server on Mac OS X?
1359
npm throws error without sudo
312
Suppress warning messages using mysql from within Terminal, but password written in bash script
1122
How to install Java 8 on Mac