What is stability in sorting algorithms and why is it important?

I'm very curious, why stability is or is not important in sorting algorithms?

Background: a "stable" sorting algorithm keeps the items with the same sorting key in order. Suppose we have a list of 5-letter words:

If we sort the list by just the first letter of each word then a stable-sort would produce:

We could sort the list of words using this algorithm: stable sorting by column 5, then 4, then 3, then 2, then 1. In the end, it will be correctly sorted. Convince yourself of that. (by the way, that algorithm is called radix sort)

You can't stack unstable sorts in the same fashion.

A stable sorting algorithm is the one that sorts the identical elements in their same order as they appear in the input, whilst unstable sorting may not satisfy the case. - I thank my algorithm lecturer Didem Gozupek to have provided insight into algorithms.

I again needed to edit the question due to some feedback that some people don't get the logic of the presentation. It illustrates sorting w.r.t. first elements. On the other hand, you can either consider the illustration consisting of key-value pairs. 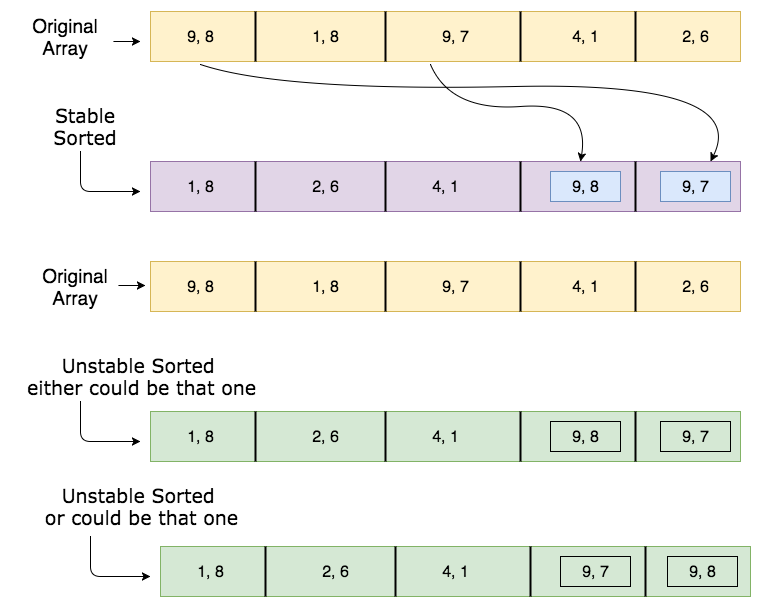 Sorting stability means that records with the same key retain their relative order before and after the sort.

So stability matters if, and only if, the problem you're solving requires retention of that relative order.

If you don't need stability, you can use a fast, memory-sipping algorithm from a library, like heapsort or quicksort, and forget about it.

If you need stability, it's more complicated. Stable algorithms have higher big-O CPU and/or memory usage than unstable algorithms. So when you have a large data set, you have to pick between beating up the CPU or the memory. If you're constrained on both CPU and memory, you have a problem. A good compromise stable algorithm is a binary tree sort; the Wikipedia article has a pathetically easy C++ implementation based on the STL.

You can make an unstable algorithm into a stable one by adding the original record number as the last-place key for each record.

It depends on what you do.

There's a few reasons why stability can be important. One is that, if two records don't need to be swapped by swapping them you can cause a memory update, a page is marked dirty, and needs to be re-written to disk (or another slow medium).

I know there are many answers for this, but to me, this answer, by Robert Harvey, summarized it much more clearly:

A stable sort is one which preserves the original order of the input set, where the [unstable] algorithm does not distinguish between two or more items.

If you assume what you are sorting are just numbers and only their values identify/distinguish them (e.g. elements with same value are identicle), then the stability-issue of sorting is meaningless.

However, objects with same priority in sorting may be distinct, and sometime their relative order is meaningful information. In this case, unstable sort generates problems.

For example, you have a list of data which contains the time cost [T] of all players to clean a maze with Level [L] in a game. Suppose we need to rank the players by how fast they clean the maze. However, an additional rule applies: players who clean the maze with higher-level always have a higher rank, no matter how long the time cost is.

Of course you might try to map the paired value [T,L] to a real number [R] with some algorithm which follows the rules and then rank all players with [R] value.

However, if stable sorting is feasible, then you may simply sort the entire list by [T] (Faster players first) and then by [L]. In this case, the relative order of players (by time cost) will not be changed after you grouped them by level of maze they cleaned.

PS: of course the approach to sort twice is not the best solution to the particular problem but to explain the question of poster it should be enough.

A classic example of a stable radix sort is a card sorter, used to sort by a field of base 10 numeric columns. The cards are sorted from least significant digit to most significant digit. On each pass, a deck of cards is read and separated into 10 different bins according to the digit in that column. Then the 10 bins of cards are put back into the input hopper in order ("0" cards first, "9" cards last). Then another pass is done by the next column, until all columns are sorted. Actual card sorters have more than 10 bins since there are 12 zones on a card, a column can be blank, and there is a mis-read bin. To sort letters, 2 passes per column are needed, 1st pass for digit, 2nd pass for the 12 11 zone.

Later (1937) there were card collating (merging) machines that could merge two decks of cards by comparing fields. The input was two already sorted decks of cards, a master deck and an update deck. The collator merged the two decks into a a new mater bin and an archive bin, which was optionally used for master duplicates so that the new master bin would only have update cards in case of duplicates. This was probably the basis for the idea behind the original (bottom up) merge sort.

For instance [2,1,2] will be sorted using stable sort as permutation [2,1,3] (first is index 2, then index 1 then index 3 in sorted output) That mean that output is always shuffled same way. Other non stable, but still correct permutation is [2,3,1].

Quick sort is not stable sort and permutation differences among same elements depends on algorithm for picking pivot. Some implementations pick up at random and that can make quick sort yielding different permutations on same input using same algorithm.

Not the answer you're looking for? Browse other questions tagged algorithm sorting language-agnostic stability or ask your own question.

39
What is the meaning of "stable" and "unstable" for various sorting algorithms?
1
Why make selection sort stable?
-1
Is there a reason why I should reverse these lines of code?
51
Is there ever a good reason to use Insertion Sort?
50
OrderBy and OrderByDescending are stable?
16
Sorting the characters in a UTF-16 string in Java
7
C++ STL:: what's the difference between inplace_merge and sort
4
Stable sort - do we really need it?
13
Is pandas.DataFrame.groupby Guaranteed To Be Stable?
4
Sort null values to last in Array of Objects
See more linked questions

955
Big O, how do you calculate/approximate it?
9078
What and where are the stack and heap?
1823
Sort a Map<Key, Value> by values
1019
What is tail call optimization?
1690
What is the difference between an abstract method and a virtual method?
1413
What is the difference between concurrency and parallelism?
2569
What does O(log n) mean exactly?
1342
How do I sort a dictionary by key?
4114
How can I pair socks from a pile efficiently?