This must be documented somewhere, but I can't find it.

In my app using the iPad simulator there is a textfield into which I want the user to paste text. In the real world the user will copy the text from Safari address into the textfield. But I am trying to do that in the ios ipad simulator, but with only partial results.

After I reRUN the app, I can immediately paste text into the textfield with the Mac's Edit|Paste Text menu or with Shift-Command-V, (but not with just Edit|Paste, but that's Ok). The need for the Shift is annoying but I can live with it.

But then if I try to copy another URL on the Mac and then again, Edit|Paste Text or even use the Paste bubble on the simulator, I don't get the new text, but the original text.

Is that common? Is that a feature of the simulator that it is not connected live to the clipboard on the host computer?

I found that even with Edit > Automatically sync pasteboard ticked, the feature didn't work.

However, simply unticking and then reticking this option fixed the feature!

Hope it works for someone.

Be careful to avoid conflating the mac's clipboard with the simulator's clipboard. They are not the same.

The simulator is simulating an iOS device, with it's own iOS clipboard which apps running on that device (simulator) use via the iOS pup-up select-all/copy/paste UI items.

Completely separate from that: your mac has it's own clipboard and content. The Simulator program running on your mac provides the Edit > Paste Text menu item. The program implements that menu item by accessing your mac clipboard and types the text into the simulator as if the user used the keyboard. The iOS clipboard is neither accessed nor affected by the Simulator application's Edit menu functions.

Update: As of Xcode 6, you need to choose the Edit > Paste menu item in the iOS Simulator (this transfers the data between the Mac clipboard and the iOS Clipboard), then tap in the field in the simulator and tap the "Paste" bubble.

I think your issues are coming from confusing the two, thinking there's one clipboard everything is sharing.

Copy text on the mac, then click the text field in the simulator and press

Turning the Automatic Pasteboard Sync off and then back on again solved the issue.

You might have to do that multiple times. Sometimes it takes a while to trigger it for some reason.

What worked for me is this.

2) In simulator do edit->paste or Command V (I think this copies the text from mac clipboard to iOS Simulator clipboard).

3) Highlight the textfield in simulator and then do command + Shift + V. 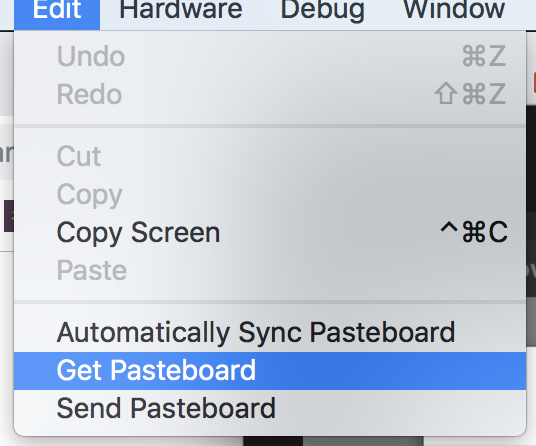 Similar thing happened to me and I found a strange workaround, it may help anyone else that may come across the same issue. Try the following steps:

After trying a lot and nothing work on M1 Macs and simulator above 14 I have taken the different route to solve problem.

Apple script to type the text in simulator.

Hope that helps in your problem.

Nothing from the above solutions worked for me. I am using M1 Apple. The thing that worked was this thread https://github.com/flutter/flutter/issues/74970

In short, if you are using iOS 14.0 to build the app, you will have the above issues.

Just Disable and then re-enable the Automatically Sync Pasteboard option from Edit menu, fixed my problem. 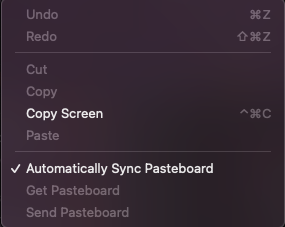 In a new emulator, I got no "paste" option and sync did not work for the simulator. It appears that in the simulator you MUST copy something to the internal clipboard before the sync actually works.

Untick and tick again "Automatically Snyc Pasteboard". Then quit the simulator and re-open it. This is what fixed it for me. 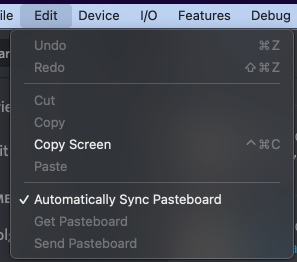 Sometimes it's very difficult to type long URLs in iOS simulator. There should be some way to copy URL from Max OS to iOS text field. Here's how you can do it:

and that's it. Your text from the Mac OS copy buffer should now be there in iOS simulator's text field.

Three steps:(The key point is make sure that the "Paste" help menu is keeping visible when you use " ⌘ + V".) 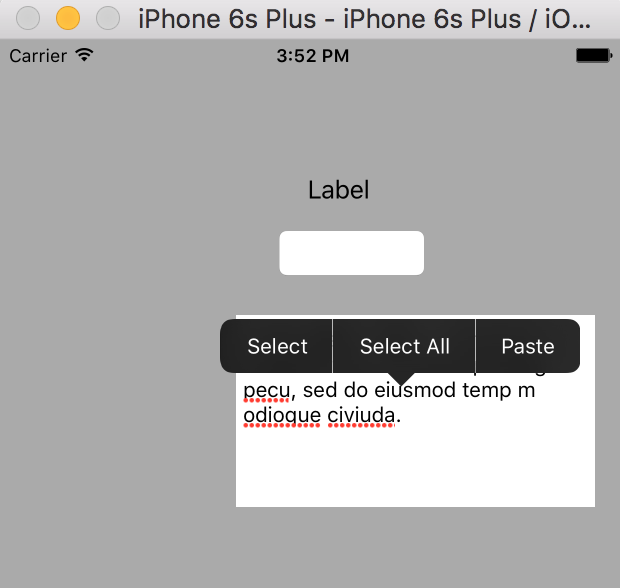 sometimes you just need to select Hardware -> reset content and settings in simulator menu. then all works automatically as easy and transparent as working in MacOS with other applications

After request access to the corresponding file while pasting (either using "Paste" menu or classic cmd+V), I can read something like :

So I guess, Apple has just some adjustments still on-going on the Simulator. Thus, neither disabling/enabling Auto-sync nor forcing sync of the pasteboard worked in my case.

This is a solution that might work if you are working with React Native.

I ran into this issue now with my M1 Pro Macbook. It started when I updated Xcode to 14.0 before that everything worked fine.

What seems to be the issue is that I'm running terminal in Rosetta. When starting the simulator via npx react-native run-ios this starts the simulator in Rosetta as well (I'm assuming here cannot prove it).

Solution: Make sure Xcode is running natively and running the project from Xcode instead of Terminal, the Copy-paste functionality should work again.

If you are using Better Touch Tool(BTT), you can create CMD+V action for iOS Simulator and run an apple script that will do the past clipboard 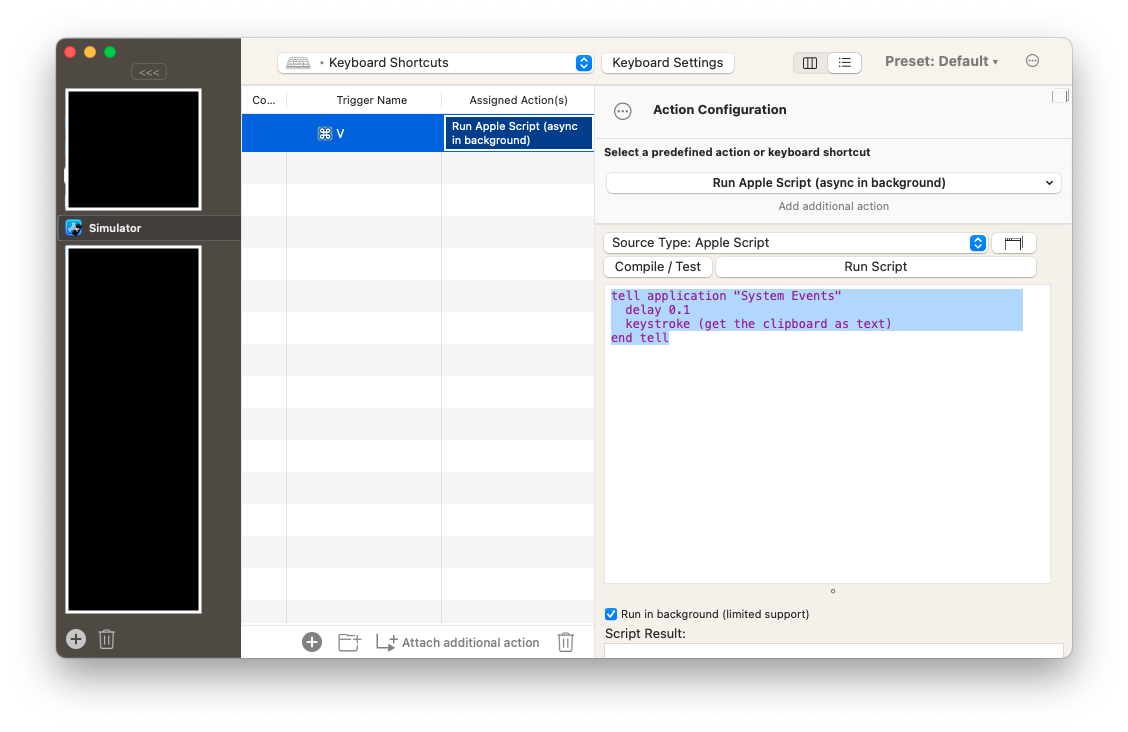 I hope it will help somebody.

P.S don't forget to bump the answer if it's helped 👍

This works for me. On Safari version 8.0.3 and IOs simulator version 8.1

This is what I found.

None of these solutions worked for me. I'm using Simulator 11.4. And after trying each of these, I realized all I needed to do was copy something on my Mac using Command + C, and then in the simulator text field, simply hold down the mouse click for an extra second or two, and the paste menu popped up automatically, and worked great. 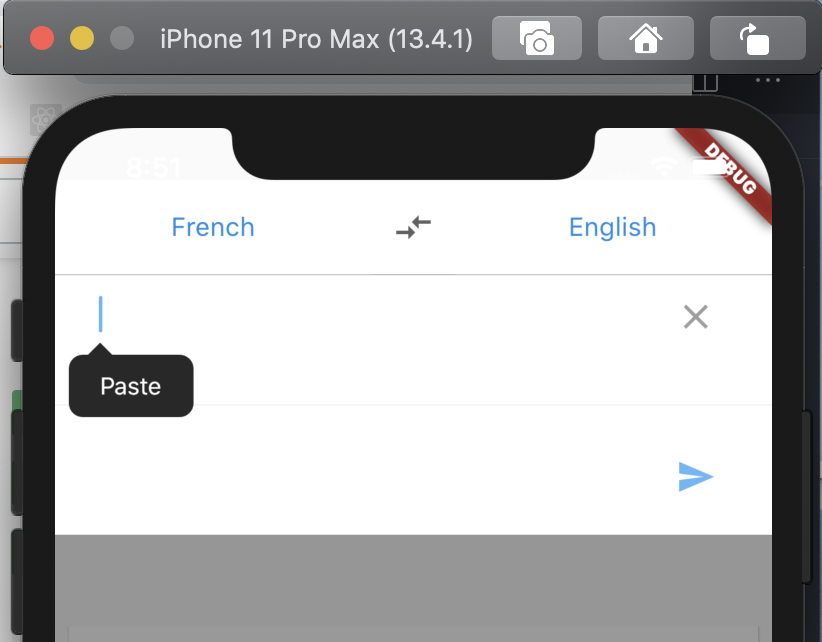 1114
How to change the name of an iOS app?
4343
How do I copy to the clipboard in JavaScript?
2318
Vertically align text to top within a UILabel
356
JavaScript get clipboard data on paste event (Cross browser)
1018
How to copy to clipboard in Vim?
1026
How to make vim paste from (and copy to) system's clipboard?
1078
How to change Status Bar text color in iOS
645
iOS app with framework crashed on device, dyld: Library not loaded, Xcode 6 Beta
496
Capture iOS Simulator video for App Preview