I have seen various versions of the dex erros before, but this one is new. clean/restart etc won't help. Library projects seems intact and dependency seems to be linked correctly.

Only one small tip, you will likely need to do this to prevent out of memory when doing dex-ing.

There's also a jumbo mode that can fix this in a less reliable way:

Update: If your app is fat and you have too many methods inside your main app, you may need to re-org your app as per

If your application supports Android prior to 5.0 (that is, if your minSdkVersion is 20 or below) you also have to dynamically patch the application ClassLoader, so it will be able to load classes from secondary dexes. Fortunately, there's a library that does that for you. Add it to your app's dependencies:

You need to call the ClassLoader patch code as soon as possible. MultiDexApplication class's documentation suggests three ways to do that (pick one of them, one that's most convenient for you):

1 - Declare MultiDexApplication class as the application in your AndroidManifest.xml:

Update 1 (10/17/2014):
As anticipated, multidex support is shipped in revision 21 of Android Support Library. You can find the android-support-multidex.jar in /sdk/extras/android/support/multidex/library/libs folder.

It was stated in this Android Developers Backstage podcast episode by Anwar Ghuloum. I've posted a transcript (and general multi-dex explanation) of the relevant part.

As already stated, you have too many methods (more than 65k) in your project and libs.

Prevent the Problem: Reduce the number of methods with Play Services 6.5+ and support-v4 24.2+

The full list of sub libraries and it's responsibilities can be found in the official google doc.

Update: Since Support Library v4 v24.2.0 it was split up into the following modules:

Do note however, if you use support-fragment, it will have dependencies to all the other modules (ie. if you use android.support.v4.app.Fragment there is no benefit)

Since Lollipop (aka build tools 21+) it is very easy to handle. The approach is to work around the 65k methods per dex file problem to create multiple dex files for your app. Add the following to your gradle build file (this is taken from the official google doc on applications with more than 65k methods):

The second step is to either prepare your Application class or if you don't extend Application use the MultiDexApplication in your Android Manifest:

Either add this to your Application.java

or use the provided application from the mutlidex lib

As further tip, if you run into OutOfMemory exceptions during the build phase you could enlarge the heap with

which would set the heap to 4 gigabytes.

See this question for more detail on the dex heap memory issue.

Analyze the source of the Problem

To analyze the source of the methods the gradle plugin https://github.com/KeepSafe/dexcount-gradle-plugin can help in combination with the dependency tree provided by gradle with e.g.

Your project is too large. You have too many methods. There can only be 65536 methods per application. see here https://code.google.com/p/android/issues/detail?id=7147#c6

The below code helps, if you use Gradle. Allows you to easily remove unneeded Google services (presuming you're using them) to get back below the 65k threshold. All credit to this post: https://gist.github.com/dmarcato/d7c91b94214acd936e42

Paste this code at the bottom of your build.gradle file and adjust the list of google services you do not need:

I've shared a sample project which solve this problem using custom_rules.xml build script and a few lines of code.

I used it on my own project and it is runs flawless on 1M+ devices (from android-8 to the latest android-19). Hope it helps.

Faced the same problem and solved it by editing my build.gradle file on the dependencies section, removing:

And replacing it with:

Try adding below code in build.gradle, it worked for me -

The perfect solution for this would be to work with Proguard. as aleb mentioned in the comment. It will decrease the size of the dex file by half. 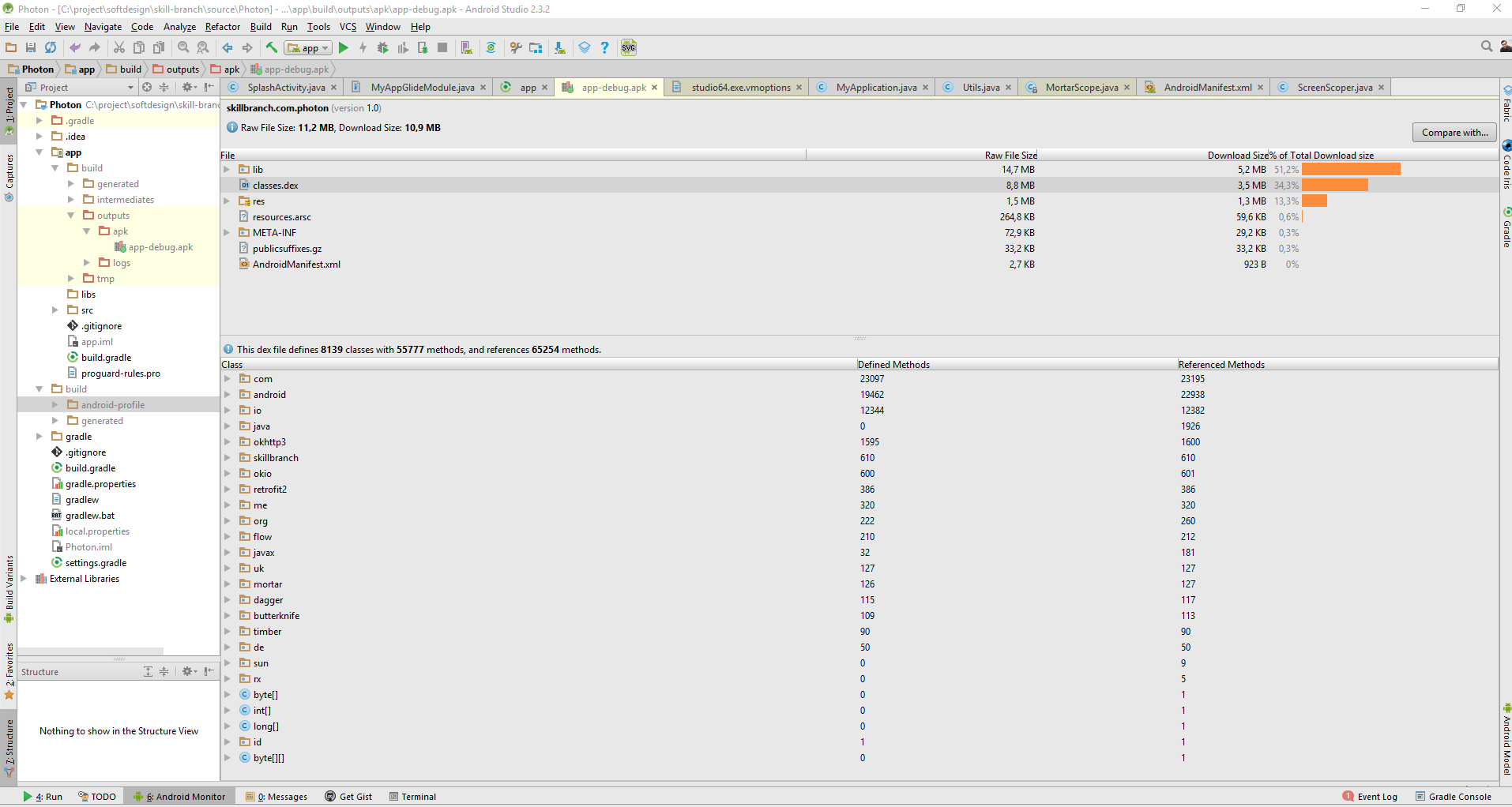 Remove some jar file from Libs folder and copy to some other folder, And Go to _Project Properties > Select Java Build Path, Select Libraries, Select Add External Jar, Select the Removed jar to your project, Click save, this will be added under Referenced Library instead of Libs folder. Now clean and Run your project. You dont need to add Any code for MultDex. Its simply worked for me.

Not the answer you're looking for? Browse other questions tagged android dex or ask your own question.