I have some CSS and HTML where the font-size is explicitly styled to be 13px, and for the most part it stays that way, but occasionally Chrome on the Nexus 7 sometimes displays a part of the same page as 14px;

Unfortunately, I have been unable to recreate the issue in jsfiddle, so I'm not sure what is going on.

Some if the styles I use to influence the font-family and font-size can been seen at my attempt to recreate the issue at http://jsfiddle.net/K9hyG/2/.

When using the Chrome debugger, I can see the following in the Computed Style for one of the offending paragraphs:

The text-shadow is generated by my usage of jQuery Mobile. In the Chrome debugger, two instances of the text-shadow directive appear. One inherited from div.ui-page.ui-body-c.ui-page-active (ui-body-c is the activating component) and the other from body.ui-mobile-viewport.ui-overlay-c, (ui-overlay-c is the activating component), but both definitions from the same section of CSS in the theme file.

If I deactivate one of them, the offending paragraph actually changes to 13px in Chrome Debugger, but still looks the same on the device. If they are both deactivated in Chrome Debugger, then it goes back to 14px. This still happens, even if the text-shadow set to rgb(255,255,255) 0px 0px 0px.

I've seen this post, but that issue is largely unresolved as well.

A colleague of mine has discovered the answer. It looks like I am the unwitting victim of Font Boosting

As per the link, Font Boosting can be disabled by providing max-height: 1000000px on the element in question or on body, body * for all elements.

Your problem is likely due to Chrome's text scaling setting, which sets text at a particular scale for accessibility reasons. A lot of users use this who struggle to read small text on their mobile. You cannot fix this and shouldn't try to resolve it, especially with sites that support mobile devices. 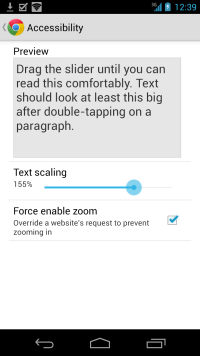 I recommend you either ignore it or modify your CSS so that it supports slightly differing text sizes.

After some tests this rule helped me out. Must be added either to the element containing boosted text or it's parent depending on the div/table structure.

Maybe the width and heigth values must be corrected according your needs.

Not the answer you're looking for? Browse other questions tagged android css responsive-design cross-browser font-size or ask your own question.

337
How to increase font size in the Xcode editor?
371
Set UIButton title UILabel font size programmatically
474
CSS Font Border?
489
How to change the font size on a matplotlib plot
427
How to change font size in Eclipse for Java text editors?
8
Computed font size is bigger than defined in CSS on the Asus Nexus 7
335
Responsive font size in CSS
735
Remove blue border from css custom-styled button in Chrome
1
How to find the place where font-size for input is set?
9
How do float font-size values on CSS render among browsers?