I have a fairly simple view configuration:

A UIViewController, with a child UIScrollView and a UIImageView in this UIScrollView. I set the UIImageView with a height sufficient to break out of the visible area (ie. higher to 1024pt), and set the Bottom space to superview constraint of my UIImageView to a fixed positive value (20 for example).

The whole setup works as expected, the image scrolls nicely in its parent. Except when the view is scrolled (the effect is more visible if you scrolled to the bottom of the view), then disappear, and appear again (you switched to another view and came back) the scrolling value is restored, but the content of the scroll view is moved to the outside top part of its parent view.

This is not simple to explain, I'll try to draw it: 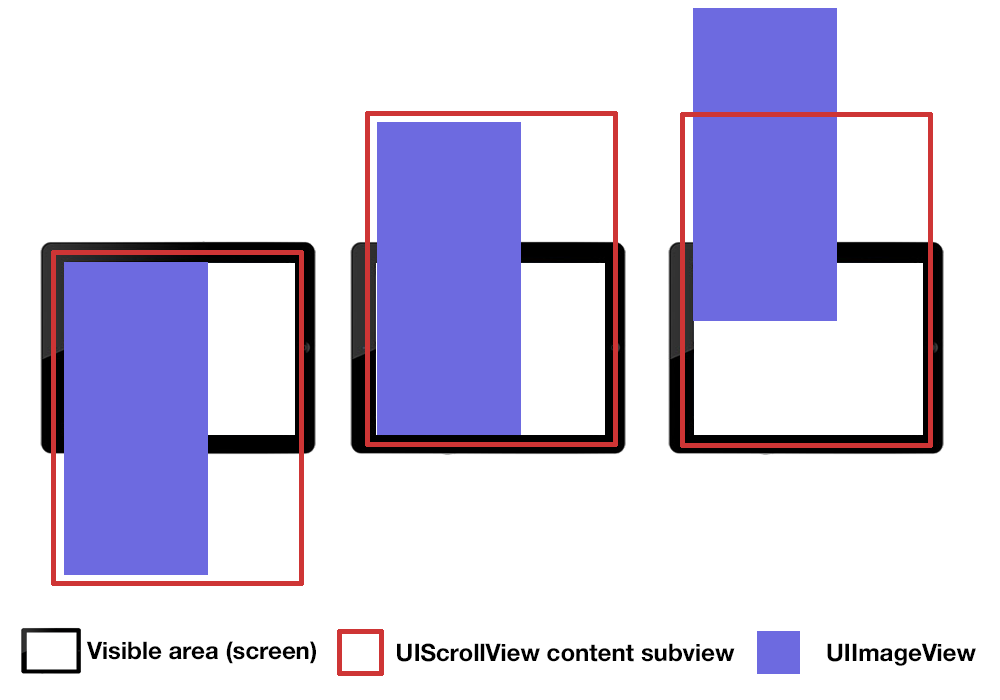 If you want to test/view the source (or the storyboard, I did not edit a single line of code). I put a little demo on my github: https://github.com/guillaume-algis/iOSAutoLayoutScrollView

I did read the iOS 6 changelog and the explanation on this particular topic, and think this is the correct implementation of the second option (pure auto layout), but in this case why is the UIScrollView behaving so erratically ? Am I missing something ?

EDIT: This is the exact same issue as #12580434 uiscrollview-autolayout-issue. The answers are just workarounds, as anyone found a proper way to fix this or is this a iOS bug ?

EDIT 2: I found another workaround, which keep the scroll position in the same state the user left it (this is an improvement over 12580434's accepted answer):

This basically save the offset in viewWillAppear, reset it to the origin, and then restore the value in viewDidAppear. The problem seems to occur between these two calls, but I can't find its origin.

Yeah, something strange happened with UIScrollView in pure autolayout environment. Re-reading the iOS SDK 6.0 release notes for the twentieth time I found that:

Connect your subview to the outer view. In another words, to the view in which scrollview is embedded.

And vau! It works!

The edit didn't work for me. But this worked:

For me I went to the IB clicked my view controller that contains the scroll view. Then I went to Attribute Inspector -> View Controller -> Extend Edges -> Uncheck "Under Top Bars" and "Under Bottom Bars".

in your ViewControllers viewDidLoad method

I had a similar problem using a UIScrollView in a UIViewController with a top extra space that was not visible in Storyboard. The solution for me was to uncheck the "Adjust Scroll View Insets" on the ViewController storyboard properties : see answer Extra Space (inset) in Scroll View at run time

Add a global property contentOffset and save the current contentOffset in viewDidDisappear. Once you return the method viewDidLayoutSubviews will be called and you can set your original contentOffset.

Looks like the problem solved with the dispatch_async during the viewWillAppear:

Not the answer you're looking for? Browse other questions tagged ios uiscrollview autolayout or ask your own question.

8
Animation inside a UIScrollView
1
UIScrollView change scroll position every visit of the view
0
After scroll visible coordinates for the objects in the UIScrollView
122
iOS: How does one animate to new autolayout constraint (height)
2
UIImageViews embed in UIScrollView in code w/ auto layout on
1
Move a UIView based on the content offset for UIScrollView
1488
Using Auto Layout in UITableView for dynamic cell layouts & variable row heights
486
UIScrollView Scrollable Content Size Ambiguity
5
How to scroll a UIScrollView to the bottom in viewWillAppear, when using autolayout,without a visual animation
6
Google Analytics doesn't work in iOS