Setting a global variable in a thread - C#

I have an HTTP server that I am writing using HTTP listener, and I would like to somehow declare certain variables as accessible from anywhere within a thread.

I thought of using a dictionary: Dictionary</*[type of Thread ID here]*/,ThreadData>, but I'm concerned there might be threading issues. ThreadData would probably be a class instance, but I might use a struct, depending on which would be more efficient.

Would there be an advantage to using a concurrent dictionary? Is there another way that is more thread-safe?

I am currently using ThreadPool.QueueUserWorkItem. I don't know for sure that this uses a new thread for each item. If not then I could also key it to the context.

Update: According to ThreadPool class - MSDN, it does reuse threads. And it does not clear thread data.

One solution would be to use a public static field, with the ThreadStatic attribute:

A static field marked with ThreadStaticAttribute is not shared between threads. Each executing thread has a separate instance of the field, and independently sets and gets values for that field. If the field is accessed on a different thread, it will contain a different value.

You could use the built in storage mechanism of the thread class: 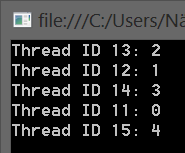 That'll work with threads spawned by the thread pool as well.

If your webserver is instance based, why not keep all of the required data in there? If each instance is locked to a certain thread, there should be no problem.

Why do you want to create a HTTP Server , Use SignalR , looks weirdo answer but think about it

Not the answer you're looking for? Browse other questions tagged c# .net-4.0 thread-safety or ask your own question.

1818
How do I calculate someone's age in C#?
1488
Calculate relative time in C#
6379
What is the difference between String and string in C#?
1836
What is the best way to give a C# auto-property an initial value?
2482
What are the correct version numbers for C#?
2164
How do I get a consistent byte representation of strings in C# without manually specifying an encoding?
1762
Get int value from enum in C#
753
What is thread safe or non-thread safe in PHP?
1664
Is there a reason for C#'s reuse of the variable in a foreach?