Where is the Tab Order Assignment dialog in Visual Studio 2012?

For as long as I can recall, Visual Studio has had an integrate dialog that allows you to easily organize the tab order of your controls.

I've just created my first VS 2012 WinForms project, added all of my controls and went to find the Tab Indexing dialog, and it appears to be missing from Visual Studio.

I found this MSDN article which states that I can open this dialog by going to FORMAT>Tab order. The problem is that there is no Tab Order option on my FORMAT menu. Alternatively, the documentation states th at Ctrl+D should open this dialog. It doesn't.

Another alternative is to select the VIEW>Tab Order menu option. This method causes Tab Index boxes to hover over your controls. You can subsequently click on your controls, one at a time, in the order in which you want them to tab, to set the tab order.

This isn't acceptable because my form contains numerous panels and group boxes that cover one another. It is impossible for me to click-through my controls because many of them are no longer visible in the designer.

Is there an easy way for me to setup the tab order of my controls like there previously use to be within older versions of Visual Studio?

It is still available, you just need to add it back to the View menu. Tools + Customize, Commands tab, Menu bar = View. Select the menu item in Controls where you want to insert it, say the bottom one. Then Add Command, Category = View, Commands = Tab Order. 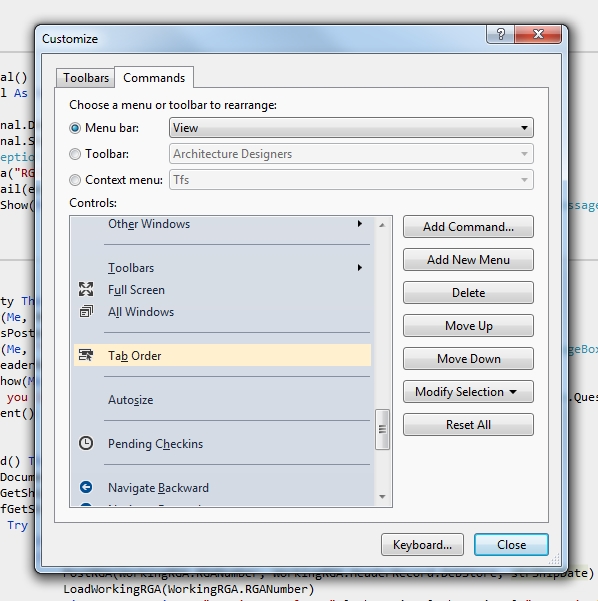 Your memory of this command does sound a bit hazy, it was never on the Format menu and its never been a dialog. If you want to put it on the Format menu then you can, just pick the Format menu bar in the Commands tab. You can't make it a dialog though, it numbers the controls in the designer view. Some odds that you actually remembered the View + Document Outline command. 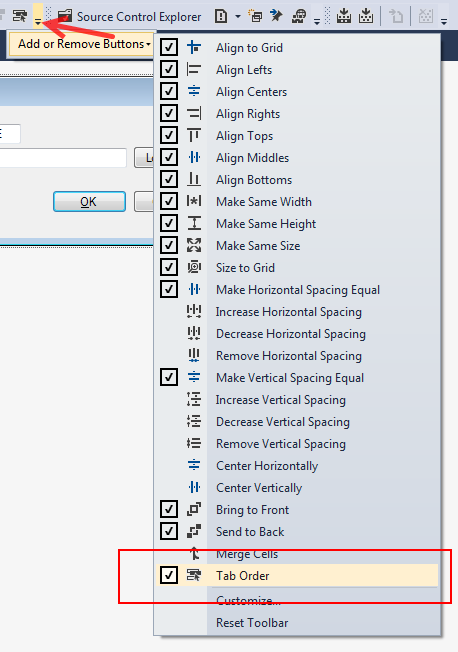 I found this to be very useful http://msdn.microsoft.com/en-us/library/csz6b8x8.aspx

It allows you to simply click on the various controls in the order that you want them to tab through. You do this while you are in the "Show tab order" mode as described above; the tip from Elton about adding the icon to a toolbar makes it easy to toggle the mode.

Ctrl-doubleclick the first control, then click subsequent controls, and press Enter to terminate. You can also start on the Nth control if you Ctrl-click the one before it, then click in order as normal.

The Tab order tool from the view menu disappears in some cases. For example, if you clikc a text box, then go to its properties, the tab order option will not show. You must select a control, then immediately go to the view menu and choose tab order.

Not the answer you're looking for? Browse other questions tagged winforms visual-studio visual-studio-2012 tab-ordering or ask your own question.

0
How can the tab index on a WinForms app be reset?
0
How to set the tab order / TabIndex when you have multiple stacked panels?