How can I find the shortest path between 100 moving targets? (Live demo included.)

This picture illustrates the problem: 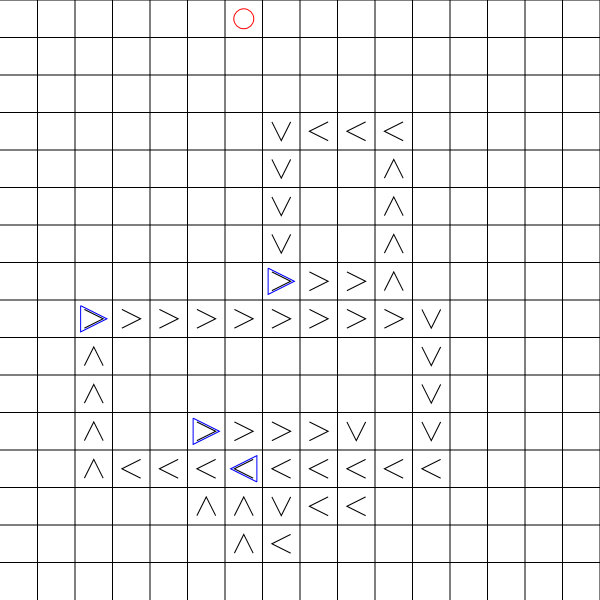 I can control the red circle. The targets are the blue triangles. The black arrows indicate the direction that the targets will move.

I want to collect all targets in the minimum number of steps.

Each turn I must move 1 step either left/right/up or down.

Each turn the targets will also move 1 step according to the directions shown on the board.

I've put up a playable demo of the problem here on Google appengine.

I would be very interested if anyone can beat the target score as this would show that my current algorithm is suboptimal. (A congratulations message should be printed if you manage this!)

My current algorithm scales really badly with the number of targets. The time goes up exponentially and for 16 fish it is already several seconds.

I would like to compute the answer for board sizes of 32*32 and with 100 moving targets.

What is an efficient algorithm (ideally in Javascript) for computing the minimum number of steps to collect all targets?

My current approach is based on memoisation but it is very slow and I don't know whether it will always generate the best solution.

I solve the subproblem of "what is the minimum number of steps to collect a given set of targets and end up at a particular target?".

The subproblem is solved recursively by examining each choice for the previous target to have visited. I assume that it is always optimal to collect the previous subset of targets as quickly as possible and then move from the position you ended up to the current target as quickly as possible (although I don't know whether this is a valid assumption).

This results in n*2^n states to be computed which grows very rapidly.

The current code is shown below:

Some options that I've wondered about are:

Have you searched the literature? I found these papers which seems to analyse your problem:

The above two papers seems to concentrate on linear movement for the euclidian metric.

One approach suggested in the comments is to go to the closest target first.

I've put up a version of the demo which includes the cost calculated via this greedy method here.

For 10 targets it is around twice the optimal distance, but sometimes much more (e.g. *4) and occasionally even hits the optimum.

This approach is very efficient so I can afford some cycles to improve the answer.

Next I'm considering using ant colony methods to see if they can explore the solution space effectively.

An Ant colony method seems to work remarkable well for this problem. The link in this answer now compares the results when using both greedy and ant colony method.

The idea is that ants choose their route probabilistically based on the current level of pheromone. After every 10 trials, we deposit additional pheromone along the shortest trail they found.

This ant colony method using 100 repeats of 10 ants is still very fast (37ms for 16 targets compared to 3700ms for the exhaustive search) and seems very accurate.

The table below shows the results for 10 trials using 16 targets:

The problem may be represented in terms of the Generalized Traveling Salesman Problem, and then converted to a conventional Traveling Salesman Problem. This is a well-studied problem. It is possible that the most efficient solutions to the OP's problem are no more efficient than solutions to the TSP, but by no means certain (I am probably failing to take advantage of some aspects of the OP's problem structure that would allow for a quicker solution, such as its cyclical nature). Either way, it is a good starting point.

From C. Noon & J.Bean, An Efficient Transformation of the Generalized Traveling Salesman Problem:

The Generalized Traveling Salesman Problem (GTSP) is a useful model for problems involving decisions of selection and sequence. The asymmetric version of the problem is defined on a directed graph with nodes N, connecting arcs A and a vector of corresponding arc costs c. The nodes are pregrouped into m mutually exclusive and exhaustive nodesets. Connecting arcs are defined only between nodes belonging to different sets, that is, there are no intraset arcs. Each defined arc has a corresponding non-negative cost. The GTSP can be stated as the problem of finding a minimum cost m-arc cycle which includes exactly one node from each nodeset.

For the OP's problem:

Solving this problem would then result in a single visit to each node subset (i.e. each fish is obtained once) for a path with minimal cost (i.e. minimal time for all fish to be obtained).

The paper goes on to describe how the above formulation may be transformed into a traditional Traveling Salesman Problem and subsequently solved or approximated with existing techniques. I have not read through the details but another paper that does this in a way it proclaims to be efficient is this one.

There are obvious issues with complexity. In particular, the node space is infinite! This can be alleviated by only generating nodes up to a certain time horizon. If t is the number of timesteps to generate nodes for and f is the number of fish then the size of the node space will be t * f. A node at time j will have at most (f - 1) * (t - j) outgoing arcs (as it can't move back in time or to its own subset). The total number of arcs will be in the order of t^2 * f^2 arcs. The arc structure can probably be tidied up, to take advantage of the fact the fish paths are eventually cyclical. The fish will repeat their configuration once every lowest common denominator of their cycle lengths so perhaps this fact can be used.

I don't know enough about the TSP to say whether this is feasible or not, and I don't think it means that the problem posted is necessarily NP-hard... but it is one approach towards finding an optimal or bounded solution.

I think another approch would be:

In mathematics, a Voronoi diagram is a way of dividing space into a number of regions. A set of points (called seeds, sites, or generators) is specified beforehand and for each seed there will be a corresponding region consisting of all points closer to that seed than to any other.

So, you choose a target, follow it's path for some steps and set a seed point there. Do this with all other targets as well and you get a voroni diagram. Depending in which area you are, you move to the seedpoint of it. Viola, you got the first fish. Now repeat this step until you cought them all.

Not the answer you're looking for? Browse other questions tagged javascript algorithm graph-theory or ask your own question.

4
How to find the shortest path between nodes?

1050
How can I tell if a DOM element is visible in the current viewport?
84
Find the shortest path in a graph which visits certain nodes
915
How do you find out the caller function in JavaScript?
903
How to find event listeners on a DOM node when debugging or from the JavaScript code?
1405
How do I find out which DOM element has the focus?
917
How to get the difference between two arrays in JavaScript?
1012
How to find the sum of an array of numbers
1191
Easy interview question got harder: given numbers 1..100, find the missing number(s) given exactly k are missing
1800
How can I add new array elements at the beginning of an array in Javascript?
1055
How can I get the full object in Node.js's console.log(), rather than '[Object]'?