I am programmatically exporting data (using PHP 5.2) into a .csv test file.
Example data: Numéro 1 (note the accented e). The data is utf-8 (no prepended BOM).

When I open this file in MS Excel is displays as NumÃ©ro 1.

I am able to open this in a text editor (UltraEdit) which displays it correctly. UE reports the character is decimal 233.

How can I export text data in a .csv file so that MS Excel will correctly render it, preferably without forcing the use of the import wizard, or non-default wizard settings?

A correctly formatted UTF8 file can have a Byte Order Mark as its first three octets. These are the hex values 0xEF, 0xBB, 0xBF. These octets serve to mark the file as UTF8 (since they are not relevant as "byte order" information).1 If this BOM does not exist, the consumer/reader is left to infer the encoding type of the text. Readers that are not UTF8 capable will read the bytes as some other encoding such as Windows-1252 and display the characters ï»¿ at the start of the file.

There is a known bug where Excel, upon opening UTF8 CSV files via file association, assumes that they are in a single-byte encoding, disregarding the presence of the UTF8 BOM. This can not be fixed by any system default codepage or language setting. The BOM will not clue in Excel - it just won't work. (A minority report claims that the BOM sometimes triggers the "Import Text" wizard.) This bug appears to exist in Excel 2003 and earlier. Most reports (amidst the answers here) say that this is fixed in Excel 2007 and newer.

Note that you can always* correctly open UTF8 CSV files in Excel using the "Import Text" wizard, which allows you to specify the encoding of the file you're opening. Of course this is much less convenient.

Readers of this answer are most likely in a situation where they don't particularly support Excel < 2007, but are sending raw UTF8 text to Excel, which is misinterpreting it and sprinkling your text with Ã and other similar Windows-1252 characters. Adding the UTF8 BOM is probably your best and quickest fix.

If you are stuck with users on older Excels, and Excel is the only consumer of your CSVs, you can work around this by exporting UTF16 instead of UTF8. Excel 2000 and 2003 will double-click-open these correctly. (Some other text editors can have issues with UTF16, so you may have to weigh your options carefully.)

* Except when you can't, (at least) Excel 2011 for Mac's Import Wizard does not actually always work with all encodings, regardless of what you tell it. </anecdotal-evidence> :)

Prepending a BOM (\uFEFF) worked for me (Excel 2007), in that Excel recognised the file as UTF-8. Otherwise, saving it and using the import wizard works, but is less ideal.

Below is the PHP code I use in my project when sending Microsoft Excel to user:

Most other answers here concern their Excel version only and will not necessarily help you, because their answer just might not be true for your version of Excel.

For example, adding the BOM character introduces problems with automatic column separator recognition, but not with every Excel version.

There are 3 variables that determines if it works in most Excel versions:

Somebody stoic at SAP tried every combination and reported the outcome. End result? Use UTF16le with BOM and tab character as separator to have it work in most Excel versions.

You don't believe me? I wouldn't either, but read here and weep: http://wiki.sdn.sap.com/wiki/display/ABAP/CSV+tests+of+encoding+and+column+separator

select UTF-8 enconding when importing. if you use Office 2007 this is where you chose it : right after you open the file. 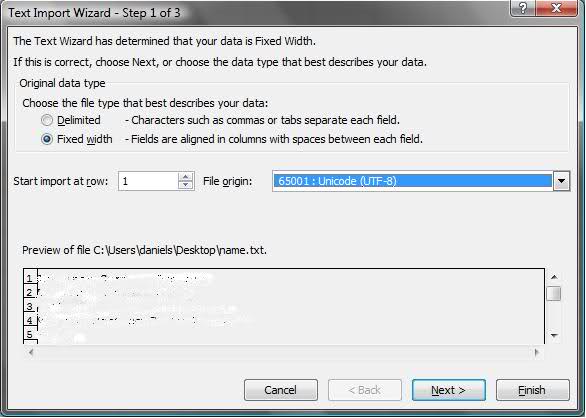 Echo UTF-8 BOM before outputing CSV data. This fixes all character issues in Windows but doesnt work for Mac.

It works for me because I need to generate a file which will be used on Windows PCs only.

UTF-8 doesn't work for me in office 2007 without any service pack, with or without BOM (U+ffef or 0xEF,0xBB,0xBF , neither works) installing sp3 makes UTF-8 work when 0xEF,0xBB,0xBF BOM is prepended.

UTF-16 works when encoding in python using "utf-16-le" with a 0xff 0xef BOM prepended, and using tab as seperator. I had to manually write out the BOM, and then use "utf-16-le" rather then "utf-16", otherwise each encode() prepended the BOM to every row written out which appeared as garbage on the first column of the second line and after.

can't tell whether UTF-16 would work without any sp installed, since I can't go back now. sigh

This is on windows, dunno about office for MAC.

for both working cases, the import works when launching a download directly from the browser and the text import wizard doesn't intervence, it works like you would expect.

I've also noticed that the question was "answered" some time ago but I don't understand the stories that say you can't open a utf8-encoded csv file successfully in Excel without using the text wizard.

My reproducible experience: Type Old MacDonald had a farm,ÈÌÉÍØ into Notepad, hit Enter, then Save As (using the UTF-8 option).

Using Python to show what's actually in there:

Good. Notepad has put a BOM at the front.

Now go into Windows Explorer, double click on the file name, or right click and use "Open with ...", and up pops Excel (2003) with display as expected.

You can save an html file with the extension 'xls' and accents will work (pre 2007 at least).

Example: save this (using Save As utf8 in Notepad) as test.xls:

This is just of a question of character encodings. It looks like you're exporting your data as UTF-8: é in UTF-8 is the two-byte sequence 0xC3 0xA9, which when interpreted in Windows-1252 is Ã©. When you import your data into Excel, make sure to tell it that the character encoding you're using is UTF-8.

The CSV format is implemented as ASCII, not unicode, in Excel, thus mangling the diacritics. We experienced the same issue which is how I tracked down that the official CSV standard was defined as being ASCII-based in Excel.

Excel 2003 (and maybe earlier) reads UTF-16LE with BOM (FF FE), but with TABs instead of commas or semicolons.

I can only get CSV to parse properly in Excel 2007 as tab-separated little-endian UTF-16 starting with the proper byte order mark.

Writing a BOM to the output CSV file actually did work for me in Django:

For more info http://crashcoursing.blogspot.com/2011/05/exporting-csv-with-special-characters.html Thanks guys!

Another solution I found was just to encode the result as Windows Code Page 1252 (Windows-1252 or CP1252). This would be done, for example by setting Content-Type appropriately to something like text/csv; charset=Windows-1252 and setting the character encoding of the response stream similarly.

Check the encoding in which you are generating the file, to make excel display the file correctly you must use the system default codepage.

Wich language are you using? if it's .Net you only need to use Encoding.Default while generating the file.

If you have legacy code in vb.net like I have, the following code worked for me:

I've found a way to solve the problem. This is a nasty hack but it works: open the doc with Open Office, then save it into any excel format; the resulting .xls or .xlsx will display the accentuated characters.

The following code is extracted from active_scaffold_export:

The important line is:

2
Generated .csv file display Â£ instead of £ symbol in csv file
1
French, Spanish accented characters does not display correctly in Excel
0
How to convert Japanese character while downloading CSV using PHP
640
Excel to CSV with UTF8 encoding
580
Is it possible to force Excel recognize UTF-8 CSV files automatically?
214
How can I output a UTF-8 CSV in PHP that Excel will read properly?
146
Which encoding opens CSV files correctly with Excel on both Mac and Windows?
75
Javascript to csv export encoding issue
78
Export to CSV using jQuery and HTML
28
How to add a UTF-8 BOM in Java?
See more linked questions