Is creating JS object with Object.create(null) the same as {}? 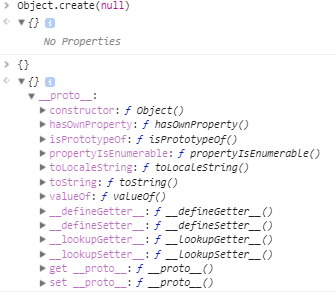 Somewhat old question and seems like all valid answers, but what @Royi Namir may have been also getting at, and what might be good to understand here is SHOULD I use it? Rather than just ask the question, I'll take a gander.

Why would you use Object.create(null) over {}? The other answers here answer that question by pointing out the difference between the two approaches, which is simply that Object.create(null) does not inherit Object.prototype prototype while {} does, and that may be of value in your particular circumstance.

Aside from that, the only reason you might want to use one over the other would be performance, memory use, or ease of use.

If we run some simple tests to measure the time it takes to create objects both ways, we can see that there are indeed both performance and memory differences. Note: for the sake of simplifying my comment, I'm only showing the tests that include assigning attributes but I've done the tests both with and without attribute assignments and the metrics are similar.

Performance While the time output is not a fully scientific, precise metric, I think it's pretty safe to say that Object.create(null) is SLOWER than {}. Depending on the number of objects you need to create, however, it may be a relatively insignificant difference.

Memory From the tests results shown, creating objects with Object.create(null) and assigning a few attributes to the objects takes about twice as much memory as creating the objects with {} with attributes inline. About 10MB more for 100,000 objects. That's significant!

Ease of Use It is readily apparent that {} with inline attributes is significantly easier to use and allows for attribute assignment that is streamlined.

Bottom line, use {} for better performance, memory use, and to ease finger stress, unless you have a real reason to create an object that does not inherit the Object.prototype prototype.

6
Difference between Object.create(null) vs {}?
1
Creating blank object with JS
36
Is it bad practice to use Object.create(null) versus {}?
13
group array and get count
4
TypeError: obj.hasOwnProperty is not a function when calling Graphql mutation
3
Iterate Object and replace values
0
How to create an object from the elements of an array in JavaScript
1
How to add a method to an object's prototype
2
Why is Javascript not handling these reserved words like a string key in this array?
1
Why does reassigning __proto__ return different result?
See more linked questions

5171
What is the most efficient way to deep clone an object in JavaScript?
4782
How do I check if an array includes a value in JavaScript?
2167
How does JavaScript .prototype work?
3615
Get the current URL with JavaScript?
3925
Sort array of objects by string property value
2608
Get all unique values in a JavaScript array (remove duplicates)
3009
How to store objects in HTML5 localStorage/sessionStorage
6543
How do I return the response from an asynchronous call?
3177
Why does my JavaScript code receive a "No 'Access-Control-Allow-Origin' header is present on the requested resource" error, while Postman does not?
2650
Can (a== 1 && a ==2 && a==3) ever evaluate to true?