What is a fast and reliable way to threshold images with possible blurring and non-uniform brightness? 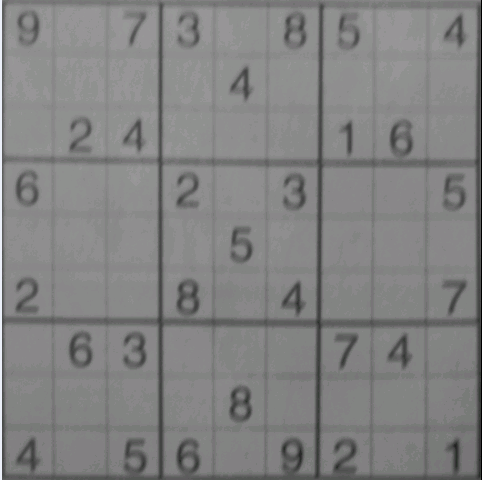 Because the image is not guaranteed to have uniform brightness, it's not feasible to use a fixed threshold. An adaptive threshold works alright, but because of the blurriness it creates breaks and distortions in the features (here, the important features are the Sudoku digits): 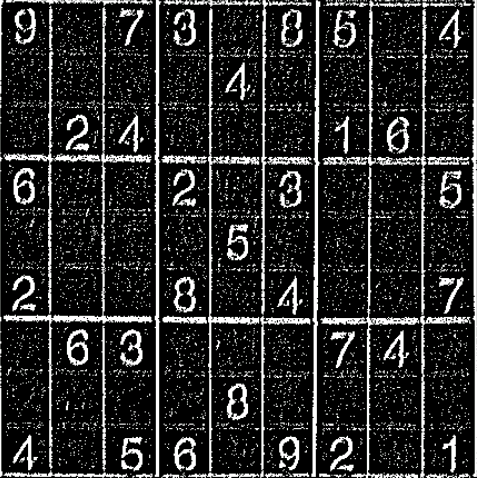 The best solution I've found is to divide the image by its morphological closing (credit to this post) to make the brightness uniform, then renormalize, then use a fixed threshold (using Otsu's algorithm to pick the optimal threshold level): 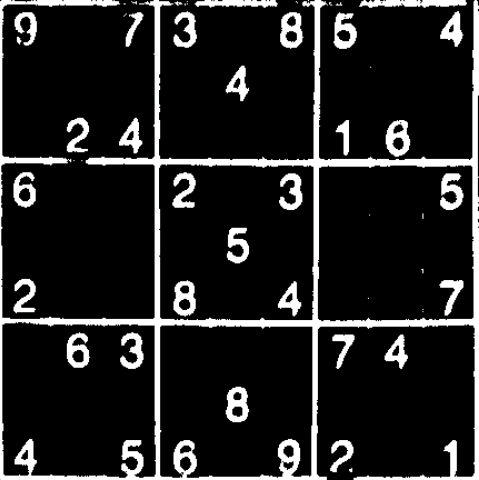 Here is code for this in OpenCV for Android:

This works great but the closing operation is very slow. Reducing the size of the structuring element increases speed but reduces accuracy.

Edit: based on DCS's suggestion I tried using a high-pass filter. I chose the Laplacian filter, but I would expect similar results with Sobel and Scharr filters. The filter picks up high-frequency noise in the areas which do not contain features, and suffers from similar distortion to the adaptive threshold due to blurring. it also takes about as long as the closing operation. Here is an example with a 15x15 filter: 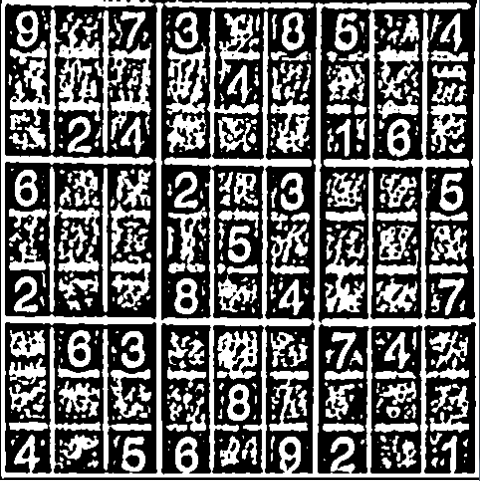 Edit 2: Based on AruniRC's answer, I used Canny edge detection on the image with the suggested parameters:

I'm not sure how to reliably automatically fine-tune the parameters to get connected digits. 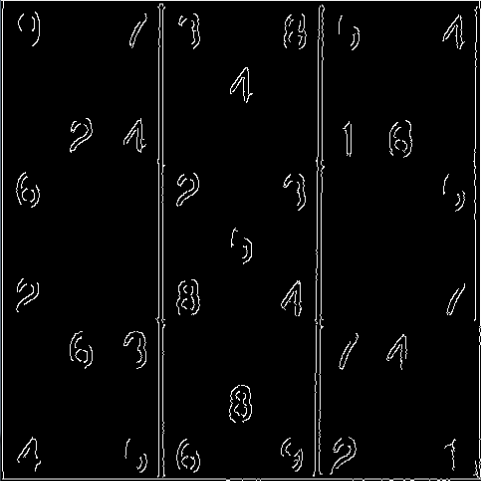 Using Vaughn Cato and Theraot's suggestions, I scaled down the image before closing it, then scaled the closed image up to regular size. I also reduced the kernel size proportionately.

The image below shows the results side-by-side for 3 different methods:

The image quality deteriorates as the size of the image used for closing gets smaller, but the deterioration isn't significant enough to affect feature recognition algorithms. The speed increases slightly more than 16-fold for the quarter-size closing, even with the resizing, which suggests that closing time is roughly proportional to the number of pixels in the image.

Any suggestions on how to further improve upon this idea (either by further reducing the speed, or reducing the deterioration in image quality) are very welcome.

Assuming your intention is to have the numerals to be clearly binarized ... shift your focus to components instead of the whole image.

Based on the Canny edge thresholds here's a very rough idea just sufficient to fine-tune the values. The high_threshold controls how strong an edge must be before it is detected. Basically, an edge must have gradient magnitude greater than high_threshold to be detected in the first place. So this does the initial detection of edges.

Now, the low_threshold deals with connecting nearby edges. It controls how much nearby disconnected edges will get combined together into a single edge. For a better idea, read "Step 6" of this webpage. Try setting a very small low_threshold and see how things come about. You could discard that 0.66*[mean value] thing if it doesn't work on these images - its just a rule of thumb anyway.

We use Bradleys algorithm for very similar problem (to segment letters from background, with uneven light and uneven background color), described here: http://people.scs.carleton.ca:8008/~roth/iit-publications-iti/docs/gerh-50002.pdf, C# code here: http://code.google.com/p/aforge/source/browse/trunk/Sources/Imaging/Filters/Adaptive+Binarization/BradleyLocalThresholding.cs?r=1360. It works on integral image, which can be calculated using integral function of OpenCV. It is very reliable and fast, but itself is not implemented in OpenCV, but is easy to port.

Another option is adaptiveThreshold method in openCV, but we did not give it a try: http://docs.opencv.org/modules/imgproc/doc/miscellaneous_transformations.html#adaptivethreshold. The MEAN version is the same as bradleys, except that it uses a constant to modify the mean value instead of a percentage, which I think is better.

You could try working on a per-tile basis if you know you have a good crop of the grid. Working on 9 subimages rather than the whole pic will most likely lead to more uniform brightness on each subimage. If your cropping is perfect you could even try going for each digit cell individually; but it all depends on how reliable is your crop.

Ellipse shape is complex to calculate if compared to a flat shape. Try to change:

can speed up your enough solution with low impact to accuracy.

Not the answer you're looking for? Browse other questions tagged opencv image-processing threshold or ask your own question.

202
How to remove convexity defects in a Sudoku square?
16
Suggestions for digit recognition

197
Simple and fast method to compare images for similarity
209
Is there a way to detect if an image is blurry?
13
Difference between adaptive thresholding and normal thresholding in opencv
1705
Image Processing: Algorithm Improvement for 'Coca-Cola Can' Recognition
16
Detect clusters of circular objects by iterative adaptive thresholding and shape analysis
17
Adaptive threshold of blurry image
10
Threshold of blurry image - part 2
2
low-contrast line detection on noisy photographes
3
How can I detect TV Screen from an Image with OpenCV or Another Library?
19
Image Processing: Algorithm Improvement for Real-Time FedEx Logo Detector