Is it possible to include a file in your .gitconfig

I'd like to include a file in my .gitconfig that has my github settings - is this possible?

See here for a detailed description of the git change and its edge cases.

By the way, a couple of subtleties worth pointing out:

I do not think so.

I would rather put that setting in the ~/.gitconfig file

That way, it completes the .gitconfig project-specific file, without being published when pushed to GitHub. See also this SO answer for more on the global config file.
Git has 3 config files.

bjeanes adds in the comments:

it looks like everyone missed the point of this question.
David obviously wants to push up a repo of all his dot files (bashrc, gemrc, etc.) INCLUDING his .gitconfig so he can have all his settings on all his machines.
A way to push parts of a .gitconfig file by including and ignoring private entries is what he (and I, for that matter) is after.

A possible way would be to use a smudge/clean filter driver to decrypt/encrypt one file with private sensitive informations (see this thread), in order to complete a local file like ~/.gitconfig with the decrypted parts that are relevant to that file.

That way you can have a Git repo with all your dot files, plus one file with encrypted information meant to be decrypted and added to said dot files. 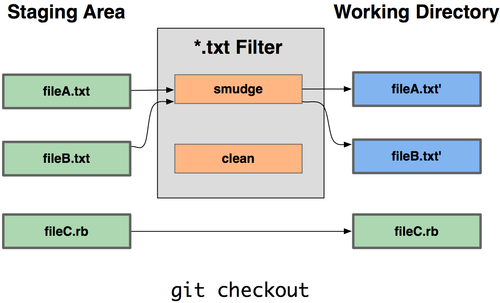 In your repo .config file:

(a GPG-based solution means, off course, you have communicated your private/public keys by another mean onto the destination computer where you want to restore all your dot files by cloning this special repo)

Actually, in your case, the smudge script needs to be completed as it must, after decrypted that file, go on and add relevant parts to your global ~/.gitconfig file (unless you overwrite the global config file with another location) or other dot files for that matter.

https://kerneltrap.org/mailarchive/git/2008/3/13/1153274/thread (gpg inconveniences are discussed further in this thread) (this is different than having a full encrytped Git repo, as discussed here)

You may load it from the command-line:

Use "$PWD"/.gitconfig instead, if you want to load the file from the current directory.

After running above command, the following lines are added into your .git/config file:

I believe you can accomplish this using defunkt's hub tool. This is a wrapper for the git command which among other things, allows you to have GITHUB_USER and GITHUB_TOKEN environment variables. Which will override the settings in the local .gitconfig file.

Then to make it seamless the user you pointed to aliased alias git=hub in his ZSH config. You should be able to then source a local file where you set your environment variables and push your repository to the public world with all of your private information in tact.

**NOTE for homebrew users on OSX, you can install the tool via brew install hub.

11
Can I load one .gitconfig file from another?
1
Separate git configurations on parent directories that do not have git config files
180
Which version of the git file will be finally used: LOCAL, BASE or REMOTE?
117
Changing .gitconfig location on Windows
62
git, don't show me *.pyc in the list of untracked files!
102
Set git config values for all child folders
70
Git ignore local changes to portions of tracked files
44
git encrypt/decrypt remote repository files while push/pull
17
Hiding GitHub token in .gitconfig
27
How to maintain (mostly) parallel branches with only a few difference
See more linked questions

5126
How can I reset or revert a file to a specific revision?
3449
View the change history of a file using Git versioning
8356
How do I force "git pull" to overwrite local files?
6758
How can I make Git "forget" about a file that was tracked, but is now in .gitignore?
5765
Move the most recent commit(s) to a new branch with Git
2271
How can I delete a file from a Git repository?
4444
Undo a Git merge that hasn't been pushed yet
4986
How to change the URI (URL) for a remote Git repository?
1892
How can I git stash a specific file?
2604
How to add images to README.md on GitHub?