Android: Simulate WiFi in the emulator?

I would like to check from my app whether the device has WiFi connectivity, but in order to do that, I must first find a way to get "WiFi" in the emulator. Just going to Settings -> Wireless controls -> Wifi says Unable to start Wi-Fi, while logcat says:

How can I simulate WiFi connectivity in the emulator?

Currently, while you can use your computer's Internet connection in the emulator, it's not reliable to use it for simulating Wi-Fi. The WifiManager gets confused when you switch/want to test your connectivity state.

Even in Android 1.5, there were some problems with it (Issue 2571 - android), and while you can use your Internet for simulating HTTP connections and downloading data, finer control over Wi-Fi connectivity should better be done with a device.

Since this seems to be a popular question, I'll go ahead and add an updated answer. The SDK still doesn't support WiFi emulation, but Genymotion does WiFi by default, so you can use that to develop/test apps with specific WiFi functionality. 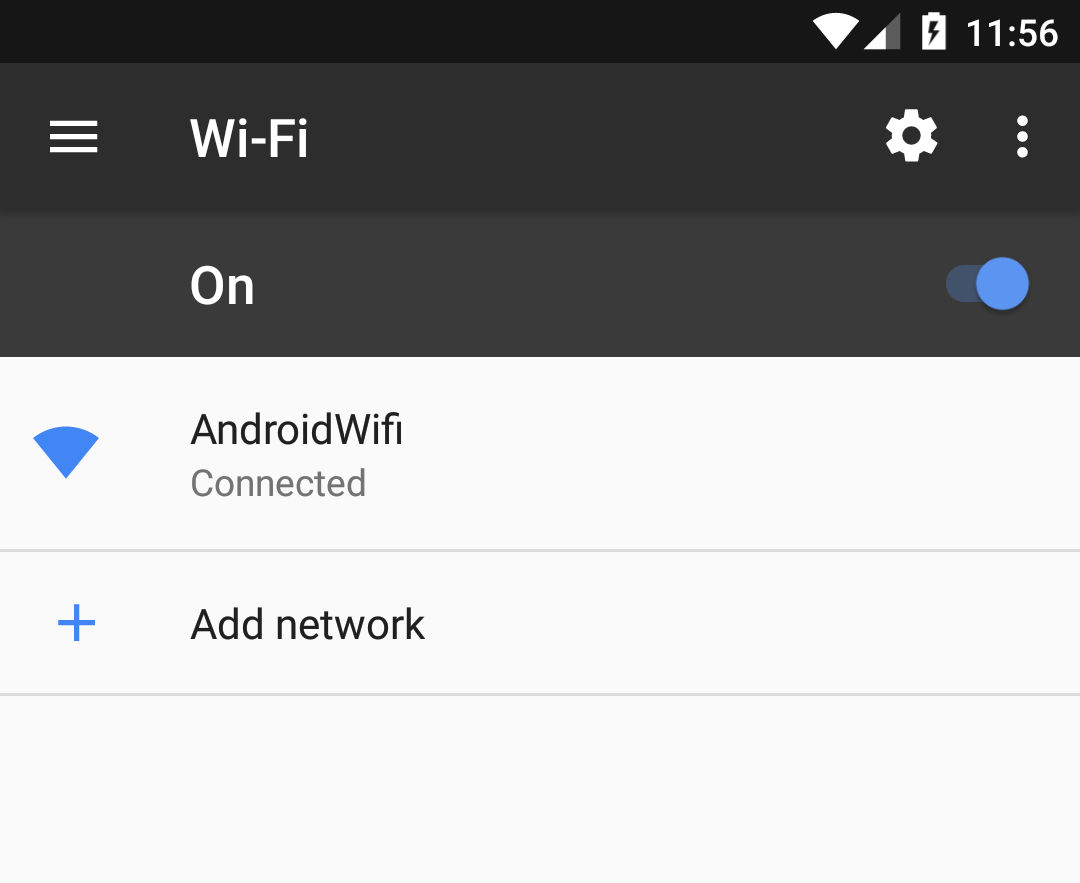 Starting from revision 26.1.3, the Android emulator now supports connecting to WiFi on a Nougat image (API 25).

Added support for Wi-Fi in some system images (currently only API level 25). An access point called "AndroidWifi" is available and Android automatically connects to it.

You can check the version of your emulator by going into emulator settings (three dots) > Help > About. Also note that if an AVD was created before version 26.1.3 was released, you will have to recreate your AVD. I read somewhere that wiping data might also work, but I did not try that.

In theory, linux (the kernel underlying android) has mac80211_hwsim driver, which simulates WiFi. It can be used to set up several WiFi devices (an acces point, and another WiFi device, and so on), which would make up a WiFi network.

It's useful for testing WiFi programs under linux. Possibly, even under user-mode linux or other isolated virtual "boxes" with linux.

In theory, this driver could be used for tests in the android systems where you don't have a real WiFi device (or don't want to use it), and also in some kind of android emulators. Perhaps, one can manage to use this driver in android-x86, or--for testing--in android-x86 run in VirtualBox.

If you don't have a real device, I think the best way is installing android-x86 or use it on live usb. There is no diffrences between android and android-x86.

And android-x86 support wi-fi. so you can install your app, and run it.

Probably no substitute for testing on a real device, but if you're looking for a good enough test case in the emulator give Fake Wifi Connection a try:

It makes apps think they're on wifi no matter what the underlying connection is.

disclaimer: I wrote this stuff.
It works by intercepting ConnectivityManager / WifiManager calls (uses Xposed). I've tried to cover most of them so it does a pretty good job, nevertheless it's always possible some is missing (if you find something let me know).

125
Enabling WiFi on Android Emulator
10
Android Emulator - Wifi Error
26
how to run wifi peer to peer application in android emulator..?
4
Simulate Wireless Network in Emulator
2
WiFi scan app could not upload .. can not tell what is the issue
1
executing WIFIDirectDemo sample with multiple android emulators
0
My emulator doesn't connect to the internet
0
No WiFi on the Android Emulator: is it a lack in the AOSP code or in the driver part?
0
android wifi failed to load driver
0
Socket Exception android
See more linked questions

4242
How to close/hide the Android soft keyboard programmatically?
3109
How to stop EditText from gaining focus when an activity starts in Android?
6252
What is the difference between px, dip, dp, and sp?
3012
Is there a unique Android device ID?
809
How do you install an APK file in the Android emulator?
2199
What is 'Context' on Android?
1503
How can you get the build/version number of your Android application?
3935
Proper use cases for Android UserManager.isUserAGoat()?