Where on my machine is the iPhone simulator installed?

I'm been trying to find where a test application I run in the simulator is stored.

You can browse simulator files from that directory in Mac OS X.

Update for Xcode 4.4: While the iPhone simulator is still in the same place, Apple has included a shortcut to the iPhone Simulator at:

Please note that the new version of Xcode is now available on the Mac App Store. Hence all the stuff that used to come with an installer is now packaged into Xcode.app.

The Apps installed in the simulator along with other configuration files are still here:

Here is an extract from the current release notes of Xcode 4.3.1

Xcode is now distributed as an application, rather than as an installer. This change enables Xcode to be updated directly from the Mac App Store.

or you can get it from below code execution:

Or print it out in Xcode console

The actual Simulator application itself is located at /Developer/Platforms/iPhoneSimulator.platform/Developer/Applications/iPhone Simulator

To find the most recent install of your application in the simulator, you can use this command:

Don't forget to replace YourAppName with the name of your app!

In Xcode 6, iOS Simulator.app is located in this location:

With the introduction of CoreSimulator in Xcode 6, each simulated device now has its own data. Previous versions had all devices share the same data for each version of iOS.

CoreSimualtor will create an initial set of devices on first use (and after installation of older simulator runtimes). You can add or delete new devices from within Xcode.app or from the command line using 'xcrun simctl create' or 'xcrun simctl delete'

In X-Code 4.2
The Photos of the iPhone simulator are stored in

As of 4.3.2 of Xcode for Lion, the iOS simulator is located in the contents of the app package... If you right click on xcode.app and click "Show package contents" then navigate to Contents/Developer/Platforms/iPhoneSimulator.platform/Developer/Applications there you will find the iOS Simulator app... Just drag it to your dock and there you go... Or you can make an Alias and drag that to your desktop (or wherever you want) for easy access to the simulator... Why Apple decided to bury it in the package, I have no clue.

On El Capitan and Xcode 7.2 and 7.3 I found the Simulators here: /Applications/Xcode.app/Contents/Developer/Applications/

The top answer is correct for location of the simulator app. But there is a secondary location where the example apps (and your app builds) are stored for the simulator to access. This is:

Each subdir is a device ID. You can find where your app is by looking in each of these dirs at data/Containers/Bundle/Application/{app_id}

For xcode 7, you'll find it at here

or execute the code below in your xcode project

I found the easiest way to find it programmatically. Run the app and put NSLog() for [NSBundle MainBundle], it will show you the whole path of the app running in simulator.

From xCode 8.0 the simulator .app is located in 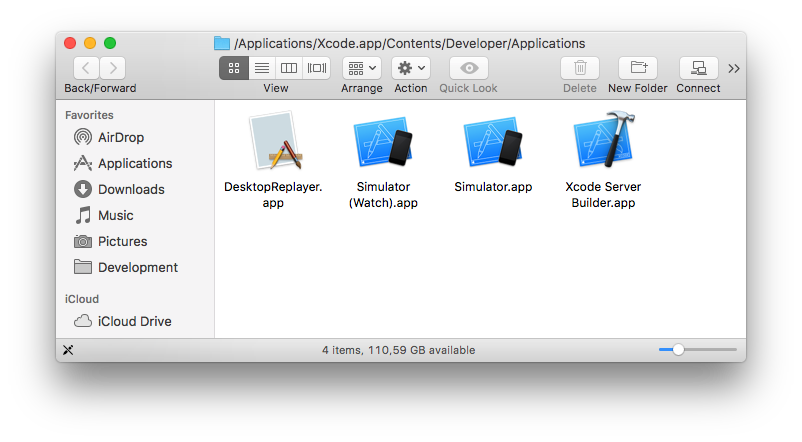 A super simple and sexy way is to use Apple Script:

Paste this into Apple Script Editor and export it as a Mac app. Then you can just run the app whenever you need a Finder window open in the sandbox. The code is courtesy StefanK at MacScripter.

It took me a while, but I just found mine at /Applications/Xcode.app/Contents/Developer/Applications/iOS\ Simulator.app

Not the answer you're looking for? Browse other questions tagged iphone objective-c ios xcode ios-simulator or ask your own question.

42
Is there a way to simulate multiple iphones using xcode/iphone sim?
1
Where are apps stored in XCode?
-2
IOS app's location in iOS simulator

1211
How can I develop for iPhone using a Windows development machine?
1026
How to change the name of an iOS app?
370
Error when testing on iOS simulator: Couldn't register with the bootstrap server
244
Where does the iPhone Simulator store its data?
458
Is it possible to disable the network in iOS Simulator?
1355
How can I disable ARC for a single file in a project?
488
Take screenshots in the iOS simulator
325
iPhone Simulator suddenly started running very slow
774
Xcode process launch failed: Security
886
Xcode error “Could not find Developer Disk Image”