When I open a Jupyter notebook (formerly IPython) it defaults to C:\Users\USERNAME.

How can I change this so to another location?

jupyter notebook --help-all could be of help:

You can of course set it in your profiles if needed, you might need to escape backslash in Windows.

Note that this will override whatever path you might have set in a jupyter_notebook_config.py file. (Where you can set a variable c.NotebookApp.notebook_dir that will be your default startup location.)

As MrFancypants mentioned in the comments, if you are using Jupyter (which you should, since it currently supersedes the older IPython Notebook project), things are a little different. For one, there are no profiles any more.

After installing Jupyter, first check your ~/.jupyter folder to see its content. If no config files were migrated from the default IPython profile (as they weren't in my case), create a new one for Jupyter Notebook:

This generates ~/.jupyter/jupyter_notebook_config.py file with some helpfully commented possible options. To set the default directory add:

As I switch between Linux and OS X, I wanted to use a path relative to my home folder (as they differ – /Users/username and /home/username), so I set something like:

Now, whenever I run jupyter notebook, it opens my desired notebook folder. I also version the whole ~/.jupyter folder in my dotfiles repository that I deploy to every new work machine.

As an aside, you can still use the --notebook-dir command line option, so maybe a simple alias would suit your needs better.

A neat trick for those using IPython in windows is that you can make an ipython icon in each of your project directories designed to open with the notebook pointing at that chosen project. This helps keep things separate.

For example if you have a new project in C:\fake\example\directory

Copy an ipython notebook icon to the directory or create a new link to the windows "cmd" shell. Then right click on the icon and "Edit Properties"

Set the shortcut properties to:

(Note the added slash at the end of "start in")

This runs windows command line, changes to your working directory, and runs the ipython notebook pointed at that directory.

Drop one of these in each project folder and you'll have ipython notebook groups kept nice and separate while still just a doubleclick away.

UPDATE: IPython has removed support for the command line inlining of pylab so the fix for that with this trick is to just eliminate "--pylab inline" if you have a newer IPython version (or just don't want pylab obviously).

Thus your shortcut can be as simple as:

If jupyter notebook is not in your PATH you just need to add the full directory reference in front of the command. If that doesn't work please try working from the earlier version. Very conveniently, now "Start in:" can be empty in my tests with 4.1.1 and later. Perhaps they read this entry on SO and liked it, so long upvotes, nobody needs this anymore :)

In iPython Notebook on Windows, this worked for me:

Besides @Matt's approach, one way to change the default directory to use for notebooks permanently is to change the config files. Firstly in the cmdline, type:

to initialize a profile with the default configuration file. Secondly, in file ipython_notebook_config.py, uncomment and edit this line:

This works for me ;)

UPDATE: There is no c.NotebookManager.notebook_dir anymore. Now, the line to uncomment and config is this one: c.NotebookApp.notebook_dir = 'Z:\\username_example\folder_that_you_whant'

Usually $ ipython notebook will launch the notebooks and kernels at he current working directory of the terminal.

But if you want to specify the launch directory, you can use --notebook-dir option as follows:

A simpler modification to the Windows Trick above - without the need to hard-code the directory.

A) Create a batch file with the following contents: (Note: A batch file is a simple text file containing commands that can be run in the cmd window. It must have a '.bat' extension, therefore ... you'll need to disable the folder setting which hides extensions of known types)

B) Copy and paste the batch file to any folder you want to start a notebook server in.

(Make sure it's a folder that you have permission to edit. "C:\" is not a good choice.)

C) Double-click on the batch file in Windows Explorer.

The notebook server should start as it normally does.

For linux and Windows: Just modify 1 line, and you can change it.

at the end of the file.

When it comes to MacOS, I couldn't find the cwp.py. Here is what I found:

It will create a config file at /Users/[your_username]/.jupyter/jupyter_notebook_config.py

For example, I change my path to '/Users/catbuilts/JupyterProjects/'

to your folder path 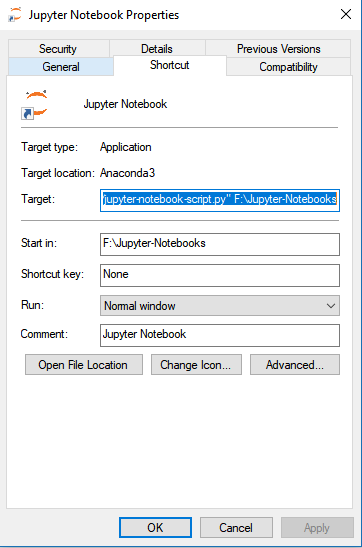 6.3 on Target text box, remove %USERPROFILE% at the end of path, The very long path should end with jupyter-notebook-script.py

just change to the preferred directory in CMD, so if you are in

the CMD cursor then will move to this folder

next you can call jupyter

To do the same trick described below for Windows in OS X, create this shell script

Call it ipython-notebook.command and make it executable.

Put it in the directory you want to work in, then double-click it.

When launched from the command line, the IPython Notebook will use your current working directory. I took advantage of this and created context menu entries to open it directly from Windows Explorer. No need for shortcuts or batch scripts!

I was inspired by the registry-based 'Git GUI Here/Git Bash Here' entries created by Git for Windows. This page (archived version linked) was helpful in locating the correct keys.

This first pair is for the context menu presented with nothing selected (e.g. the directory background). The notebook will open with the current directory as it's working directory.

This pair is for the context menu presented when clicking on a folder. The notebook will open with the selected folder as it's working directory.

Pay attention to %v vs %1 arguments or it won't work. Don't forget the quotes either. On my platform the full path to IPython Notebook is C:\WinPython-32bit-2.7.6.4\IPython Notebook.exe but this value will obviously dependent on your installation.

Edit: AFAICT the full path is required even if the executable is on the system path.

Locate your ipython binary. If you have used anaconda to install ipython-notebook on a mac, chances are it will be in the /Users/[name]/anaconda/bin/ directory

in that directory, instead of launching your notebook as

I use a bashscript in my ipython bin directory to launch my notebooks:

Note - the path to the notebook dir is relative to the ipython bin directory.

Simply follow the guide on the official site, also copied below. For the first step, instead of copying the launcher, you can just go to start menu and right click to open the location.

On MiniConda2/Anaconda2 under Windows to change Jupyter or iPython working directory, you can modify this file:

and add your project folder location: development_folder= 'C:\Users\USERNAME\Development' Which is My Username \ Development in my case.

I followed the above suggestions here I was still unable to get my setup working.

Here's what I did - in case anyone needs it:

It looks like Ipython notebook was using the configuration from C:\pythonPath\winpythonPath\settings\.ipython\profile_default

Even though ipython locate returns C:\users\Username\.ipython

As a result, modifying the ipython_notebook_config.py file did nothing to change my working directory.

Additionally ipython profile_create was not creating the needed python files in C:\pythonPath\winpythonPath\settings\.ipython\profile_default

Note on Windows I'm having no issue with the following syntax:

If you are using ipython in linux, then follow the steps:
!cd /directory_name/
You can try all the commands which work in you linux terminal.
!vi file_name.py

Just specify the exclamation(!) symbol before your linux commands.

I have a very effective method to save the notebooks in a desired location in windows.

In command line before typing "jupyter notebook" navigate to the desired folder.

In my case my all python files are in "D:\Python".

Then type the command "jupyter notebook" and there you have it. You have changed your working directory.

This question keeps coming up when I search for ipython change pwd even though I am not interested in a notebook, but a terminal or qtconsole. Not finding a relevant config entry I tried:

This is the base level shell class; there are Terminal and Console (and probably notebook) entries that could further customize the action.

From the docs it looks like import statements are most common in the entry, but it appears that many magic commands work as well.

If you are using ipython in windows, then follow the steps:

You can also use AutoHotKey with a simple script to open a Jupyter Notebook server in a default directory (CTRL+I) or a path highlighted in explorer (or elsewhere with CTRL+SHIFT+I).

Upper Solution may not work for you if you have installed latest version of Python in Windows. I have installed Python 3.6.0 :: Anaconda 4.3.0 (64-bit) and I wanted to change the working directory of iPython Notebook called Jupyter and this is how it worked for me.

Step-2 : It has now generated a file in your .jupyter folder. For me, it's C:\Users\Admin.jupyter . There you will find a file called jupyter_notebook_config.py .Right click and edit it. Add the following line and set path of your working directory. Set your own working directory in place of "I:\STUDY\Y2-Trimester-1\Modern Data Science"

We are done. Now you can try restarting your Jupyter Notebook. Hope this is useful to you. Thanks

I'll add to the long list of answers here. If you are on Windows/ using Anaconda3, I accomplished this by going to the file /Scripts/ipython-script.py, and just added the lines

Not the answer you're looking for? Browse other questions tagged ipython jupyter-notebook jupyter or ask your own question.

2
How to open Jupyter notebook files located in C./D./ Drive?
18
Change anaconda ipython main directory
13
OS X bash: dirname
4
How to start Jupyter Lab in current directory without changing defaults?
2
Setting the working directory of IPython Shell to that of the python file being executed in Canopy
2
Find the default local Jupyter directory
2
Changing Jupyter Notebook start up folder by modifying "start in" not working any more
2
Change path in every IPython notebook
0
I get error , cannot import from file helper
0
ipython notebook - uploading from and saving to subdirectories?
See more linked questions

332
How to write LaTeX in IPython Notebook?
627
Using IPython / Jupyter Notebooks Under Version Control
919
How to make IPython notebook matplotlib plot inline
961
What is the difference between pip and conda?
258
How to load/edit/run/save text files (.py) into an IPython notebook cell?
481
How do I increase the cell width of the Jupyter/ipython notebook in my browser?
474
How to change the Jupyter start-up folder
313
In which conda environment is Jupyter executing?
510
Conda environments not showing up in Jupyter Notebook