Whats the difference between Object Pascal and Delphi? Are they the same thing? What are the differences and similarities between them and which one is more useful?

Apple stopped developing Object Pascal and it was never standardised as had been originally intended. For the release of Delphi 6, Borland chose to rename their language as Delphi.

You ask the question:

What's the difference between Object Pascal and Delphi?

But that's not really too meaningful since the original Object Pascal doesn't really exist in a distinct form any more. Apple abandoned it. The only extant implementations of Object Pascal like languages that are in widespread use are Delphi and the languages that it inspired: FreePascal, Oxygene, DWS, etc.

So a better question would be "What is the difference between Delphi and FreePascal?" Nowadays, Object Pascal is used loosely to refer to this family of related languages.

Object Pascal is an extension to Pascal. There are a number of dialects of Object Pascal, Delphi being one of them. Here is a fairly complete writeup on the History of Pascal. It doesn't include Free Pascal or DWS. Free Pascal is focused on being a open source and cross platform clone of Delphi (I'm sure I've offended a few people with that.)

Each dialect of Object Pascal adds things and implements things a little differently. 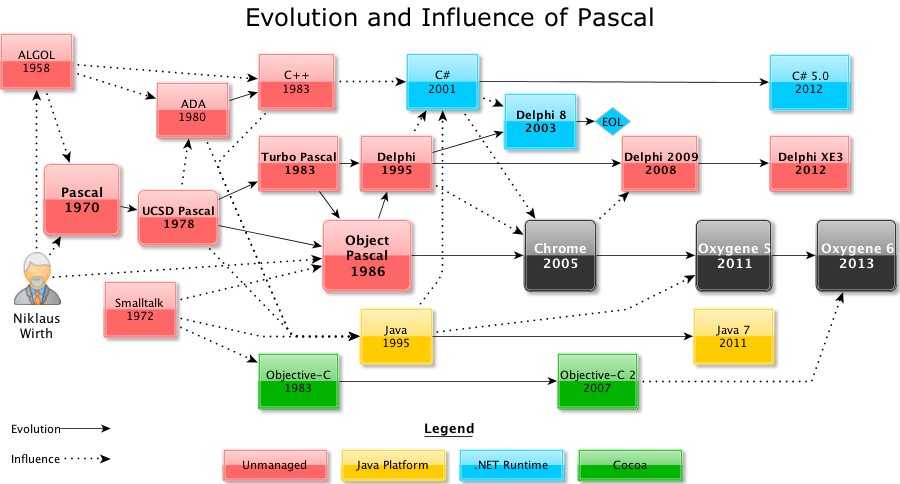 As already said Object Pascal originates from a Apple standards proposal that never was ratified, and is still used for dialects that borrow from it. Most of all the dialect used by Delphi.

The object oriented Turbo Pascal versions were also referred to as Object Pascal as far as I know, though sometimes as "Pascal with Objects". I don't know if there is a relation from the Turbo Pascal objects implementation to the Apple proposal. The main aspect borrowed from Apple seems to be that Object instances are always implicit references.

Since Delphi is a registered trademark in many countries, most compatibles kept referring to the language as Object Pascal, even after Borland renamed it. The renaming was said to be done mostly because "Pascal" equated too much to "old" in the market, according to Borland. Some said it was because "Object Pascal" couldn't be trademarked, and so the renaming was an anti competitive measure. (I'm not paranoid, I don't think this was geared against FreePascal, which wasn't any threat back then, if true, it was probably against embedded startups like Pocketstudio and Gardens Point)

As far as I know, Object Pascal is the name of the language behind Delphi. Delphi itself being the IDE (Integrated Development Environment). In that sense, you can say that Object Pascal is for Delphi (and Lazarus) what objective C is for xCode. Furthermore, Delphi is also known as a RAD (Rapid Application Development) IDE. I hope this helps.

Not the answer you're looking for? Browse other questions tagged delphi pascal or ask your own question.

1
Get the coordinates of a position on a 3dgrid

4
How to convert OWL/BP7 application to Delphi?
2
Why we need Delphi prism
10
Single-source unit tests for Free Pascal and Delphi
18
Why do Delphi and Free Pascal usually prefer a signed-integer data type to unsigned one?
268
How to affect Delphi XEx code generation for Android/ARM targets?
11
Testing the type of a generic in delphi
0
Pascal Exception