How do I resolve git saying "Commit your changes or stash them before you can merge"?

I made some updates on my local machine, pushed them to a remote repository, and now I'm trying to pull the changes to the server and I get the message;

and tried again and I get the same message. I'm assuming that w3tc changed something in the config file on the server. I don't care whether the local copy or remote copy goes on the server (I suppose the remote one is best), I just want to be able to merge the rest of my changes (plugin updates).

You have three options:

The first command stores your changes temporarily in the stash and removes them from the working directory.

The third command restores the changes which you have stored in the stash (the --index option is useful to make sure that staged files are still staged).

You can try one of the following methods:

For simple changes try rebasing on top of it while pulling the changes, e.g.

So it'll apply your current branch on top of the upstream branch after fetching.

This is equivalent to: checkout master, fetch and rebase origin/master git commands.

This is a potentially dangerous mode of operation. It rewrites history, which does not bode well when you published that history already. Do not use this option unless you have read git-rebase(1) carefully.

If you don't care about your local changes, you can switch to other branch temporary (with force), and switch it back, e.g.

If you don't care about your local changes, try to reset it to HEAD (original state), e.g.

If above won't help, it may be rules in your git normalization file (.gitattributes) so it's better to commit what it says. Or your file system doesn't support permissions, so you've to disable filemode in your git config.

Related: How do I force "git pull" to overwrite local files?

So the situation that I ran into was the following:

error: Your local changes to the following files would be overwritten by merge: wp-content/w3tc-config/master.php Please, commit your changes or stash them before you can merge.

except, right before that, was remote: so actually this:

remote: error: Your local changes to the following files would be overwritten by merge: some/file.ext Please, commit your changes or stash them before you can merge.

What was happening was (I think, not 100% positive) the git post receive hook was starting to run and screwing up due to movement changes in the remote server repository, which in theory, shouldn't have been touched.

So what I ended up doing by tracing through the post-receive hook and finding this, was having to go to the remote repository on the server, and there was the change (which wasn't on my local repository, which, in fact, said that it matched, no changes, nothing to commit, up to date, etc.) So while on the local, there were no changes, on the server, I then did a git checkout -- some/file.ext and then the local and remote repositories actually matched and I could continue to work, and deploy. Not entirely sure how this situation occurred, though a couple dozen developers plus IT changes may had something to do with it.

WARNING: This will delete untracked files, so it's not a great answer to this question.

In my case, I didn't want to keep the files, so this worked for me:

To keep record of your newly created files while resolving this issue:

If you have newly created files, you can create a patch of local changes, pull in remote merges and apply your local patch after the remote merge is complete as defined step by step below:

Git will merge changes and create .rej files for changes which are not merged.

As suggested by Anu, if you have issues applying patch, try:

git apply --reject --whitespace=fix mypatch.patch This answer git: patch does not apply talks in detail about this issue

Enjoy your continued work on your feature, and commit your local changes when done.

This solved my error:

Move back to my branch: "A"

For me this worked:

Asking for commit before pull

For me, only git reset --hard worked.

Commiting was not an option, as there was nothing to commit.

Stashing wasn't an option because there was nothing to stash.

Looks like it could have been from excluded files in .git/info/exclude and having git update-index --assume-unchanged <file>'ed some files.

Before using reset think about using revert so you can always go back.

When maintaining code using version control systems such as git, it is unavoidable that we need to rollback some wrong commits either due to bugs or temp code revert. In this case, rookie developers would be very nervous because they may get lost on what they should do to rollback their changes without affecting others, but to veteran developers, this is their routine work and they can show you different ways of doing that. In this post, we will introduce two major ones used frequently by developers.

What are their differences and corresponding use cases? We will discuss them in detail below. git reset Assuming we have below few commits.

Commit A and B are working commits, but commit C and D are bad commits. Now we want to rollback to commit B and drop commit C and D. Currently HEAD is pointing to commit D 5lk4er, we just need to point HEAD to commit B a0fvf8 to achieve what we want.  It's easy to use git reset command.

After executing above command, the HEAD will point to commit B.

But now the remote origin still has HEAD point to commit D, if we directly use git push to push the changes, it will not update the remote repo, we need to add a -f option to force pushing the changes.

The drawback of this method is that all the commits after HEAD will be gone once the reset is done. In case one day we found that some of the commits ate good ones and want to keep them, it is too late. Because of this, many companies forbid to use this method to rollback changes.

This method would not have the disadvantage of git reset, it would point HEAD to newly created reverting commit and it is ok to directly push the changes to remote without using the -f option. Now let's take a look at a more difficult example. Assuming we have three commits but the bad commit is the second commit.

It's not a good idea to use git reset to rollback the commit B since we need to keep commit C as it is a good commit. Now we can revert commit C and B and then use cherry-pick to commit C again.

From above explanation, we can find out that the biggest difference between git reset and git revert is that git reset will reset the state of the branch to a previous state by dropping all the changes post the desired commit while git revert will reset to a previous state by creating new reverting commits and keep the original commits. It's recommended to use git revert instead of git reset in enterprise environment.  Reference: https://kknews.cc/news/4najez2.html

In my case, I backed up and then deleted the file that Git was complaining about, committed, then I was able to finally check out another branch.

I then replaced the file, copied back in the contents and continued as though nothing happened.

This is probably being caused by CRLF issues.

See: Why should I use core.autocrlf=true in Git?

Use this to pull and force update:

I tried the first answer: git stash with the highest score but the error message still popped up, and then I found this article to commit the changes instead of stash 'Reluctant Commit'

and the error message disappeared finally:

2: git commit -m "this is an additional commit"

then it worked. hope this answer helps.:)

If you are using Git Extensions you should be able to find your local changes in the Working directory as shown below:

If you don't see any changes, it's probably because you are on a wrong sub-module. So check all the items with a submarine icon as shown below: 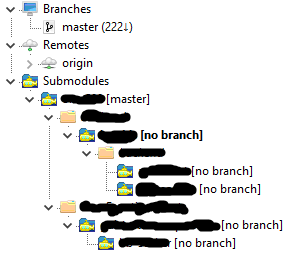 When you found some uncommitted change:

Select the line with Working directory, navigate to Diff tab, Right click on rows with a pencil (or + or -) icon, choose Reset to first commit or commit or stash or whatever you want to do with it.

% git status HEAD detached at 5c Changes not staged for commit: (use "git add ..." to update what will be committed) (use "git restore ..." to discard changes in working directory)

I faced a similar issue with .env file on my NestJS project.

Tried many approaches including the ones on this page.

Finally, copied the contents of .env on clipboard, deleted the file and git pull worked!

Recreated .env and pasted contents back in.

In case of multiple files just move them temporarily outside of git repo directory and move them back after pulling your changes.

Not the answer you're looking for? Browse other questions tagged git git-commit or ask your own question.

1
Git Not Able to Pull As Changes Done On Server Files
-1
Pulling with GitHub?
0
How sync linux nodejs repo with master repo in bitbucket
0
Resolve git pull (Error:"will overwrite local changes") like a merge conflict
0
How to overwrite local edited file via Git and update to latest commit?
0
Git fetching updated code from bitbucket to digital ocean
8732
How do I force "git pull" to overwrite local files?
788
How do I ignore an error on 'git pull' about my local changes would be overwritten by merge?
1382
Difference between git stash pop and git stash apply
431
git: patch does not apply
See more linked questions

5758
How do I discard unstaged changes in Git?
5206
How do I resolve merge conflicts in a Git repository?
10535
How do I undo 'git add' before commit?
24428
How do I undo the most recent local commits in Git?
8732
How do I force "git pull" to overwrite local files?
7235
How can I make Git "forget" about a file that was tracked, but is now in .gitignore?
7618
How do I revert a Git repository to a previous commit?
2912
How do you push a tag to a remote repository using Git?
1621
How can I merge multiple commits onto another branch as a single squashed commit?
2834
Git fetch remote branch