I'm trying to compile a WiX installer (which has custom actions, which I suspect are the source of the issue) on a build server and I'm getting the following error:

Any idea what needs to be installed? I vaguely remember that I had to install something from the Windows SDK last time I did this, but can't remember what it was.

It's part of Windows Installer XML (WiX) an open source project formerly from Microsoft but since transferred to the Outercurve Foundation. It can be found on CodePlex. 3.7 is the latest release.

This interop assembly is part of Deployment Tools Foundation (DTF) and you'll find an SDK help file installed in the start menu. The actual assembly will be found in C:\Program Files (x86)\WiX Toolset v3.7\SDK.

I downloaded WiX v3.11 from official website which eventually lands to this git hub page. The set up is actually an executable (*.exe) rather an MSI which shows you this installation page: 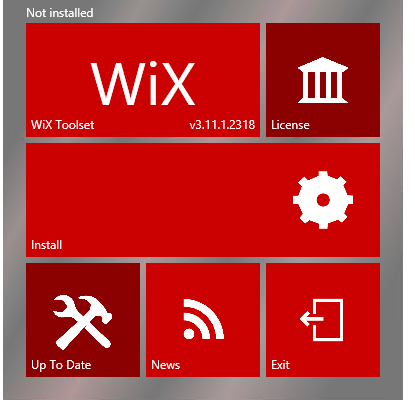 Just click on the install gear icon. Once installation completes select the reference to Microsoft.Deployment.WindowsInstaller in Visual Studio solution explorer and click refresh from toolbar.

For me this was just a matter of providing a hint for the reference in cproj file, pointing to the Wix nuget package.

You have to create a Custom Action Project and refer it to your installer. That will locate the assembly Microsoft.Deployment.WindowsInstaller.

8
What's the simplest way to ensure that WiX projects build without having to install the toolkit?
-1
Find the location of an application on Windows