How much faster is it to use inline/base64 images for a web site than just linking to the hard file?

How much faster is it to use a base64/line to display images than opposed to simply linking to the hard file on the server?

I haven't been able to find any type of performance metrics on this.

I have a few concerns:

Let's define "faster" as in: the time it takes for a user to see a full rendered HTML web page

'Faster' is a hard thing to answer because there are many possible interpretations and situations:

Base64 encoding will expand the image by a third, which will increase bandwidth utilization. On the other hand, including it in the file will remove another GET round trip to the server. So, a pipe with great throughput but poor latency (such as a satellite internet connection) will likely load a page with inlined images faster than if you were using distinct image files. Even on my (rural, slow) DSL line, sites that require many round trips take a lot longer to load than those that are just relatively large but require only a few GETs.

If you do the base64 encoding from the source files with each request, you'll be using up more CPU, thrashing your data caches, etc, which might hurt your servers response time. (Of course you can always use memcached or such to resolve that problem).

Doing this will of course prevent most forms of caching, which could hurt a lot if the image is viewed often - say, a logo that is displayed on every page, which could normally be cached by the browser (or a proxy cache like squid or whatever) and requested once a month. It will also prevent the many many optimizations web servers have for serving static files using kernel APIs like sendfile(2).

Basically, doing this will help in certain situations, and hurt in others. You need to identify which situations are important to you before you can really figure out if this is a worthwhile trick for you.

I have done a comparison between two HTML pages containing 1800 one-pixel images.

In the second one, images reference an external file:

I found that when loading multiple times the same image, if it is declared inline, the browser performs a request for each image (I suppose it base64-decodes it one time per image), whereas in the other scenario, the image is requested once per document (see the comparison image below).

The scenario of an HTML document with multiple instances of the same inline image doesn't make much sense a priori. However, I found that the plugin jquery lazyload defines an inline placeholder by default for all the "lazy" images, whose src attribute will be set to it. Then, if the document contains lots of lazy images, a situation like the one described above can happen. 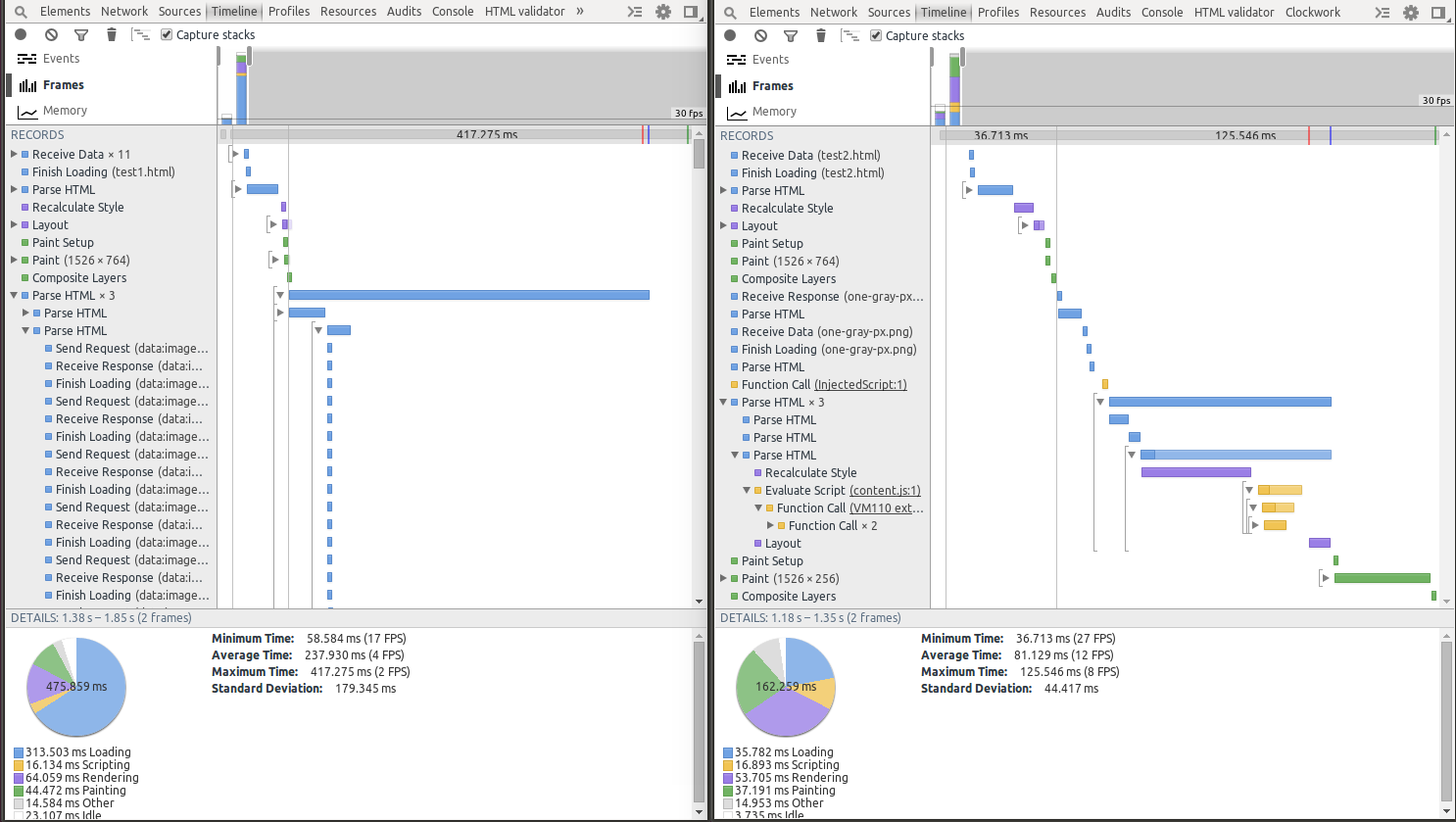 You no longer gain the benefit of caching

Whether that matters would vary according to how much you depend on caching.

The other (perhaps more important) thing is that if there are many images, the browser won't get them simultaneously (i.e. in parallel), but only a few at a time -- so the protocol ends up being chatty. If there's some network end-to-end delay, then many images divided by a few images at a time multiplied by the end-to-end delay per image results in a noticeable time before the last image is loaded.

Isn't a base64 A LOT larger in size than what a PNG/JPEG file size?

The file format / image compression algorithm is the same, I take it, i.e. it's PNG.

Using Base-64, each 8-bit character represents 6-bits: therefore binary data is being decompressed by a ratio of 8-to-6, i.e. only about 35%.

How much faster is it

Define 'faster'. Do you mean HTTP performance (see below) or rendering performance?

You no longer gain the benefit of caching

Actually, if you're doing this in a CSS file it will still be cached. Of course, any changes to the CSS will invalidate the cache.

In some situations this could be used as a huge performance boost over many HTTP connections. I say some situations because you can likely take advantage of techniques like image sprites for most stuff, but it's always good to have another tool in your arsenal!

Not the answer you're looking for? Browse other questions tagged html image rendering inline base64 or ask your own question.

54
Advantages and disadvantages of using base64 encoded images
3
Jquery clone image without reloading
1
Alternatives to CSS sprites
2
Is possible to codify all images in base64 using nginx reverse proxy?
0
What is the fastest way to load/display dozens of SVG icons?
0
vb.net: display an image in image control from filepath saved in an access database?

359
How to add an image to a JPanel?
12
Including base64 gzipped stylesheets/images in javascript?
0
Large amount of dataURIs compared to images
0
iPad reducing JPEG dimensions in mobile Safari/UIWebView
2
Image.FromFile why read in bitmap is faster than jpeg file
0
Base64 Inline Image use more than once
4
DirectX Screen Capture and Output as Video
3
At what point is requesting an image file faster than base64 encoding it inline?
1
Swapping identical location references with a single variable in json